The multimedia artist fights fear and isolation with manufactured authenticity.

“We live in a weird time.” This sentiment is perhaps the best distillment of Sam Fayed’s work. When the artist spoke with Document, the words ‘absurd,’ ‘odd,’ and the like cropped up into conversation continuously—for good reason. The collapse of boundaries between the real and imaginary as facilitated by technology has never been so explicit; the fact that we are all aware of this does not mitigate its disorienting effects. So, Fayed is highly attuned to the artificiality produced by the digital sphere, and he is concerned about its implications for human experience—but he is not one to promote moral panic.

Instead, the artist presents the absurdity of our age as a conduit for humor; laughter is his proposed antidote to fear and isolation. He accomplishes this by imposing contemporary and digital—not to mention, witty—interventions onto nostalgia-laden found photographs. With a background in filmmaking, music, and fashion design, his eccentric point of view informs his interventions, merging his love for narrative-building and Americana with his technical know-how. This merger is particularly evident in Fayed’s deepfakes; in one striking example, he photo composited Clint Eastwood’s face onto a look alike holding an ‘American Gray Scale.’ All of the works in RESIDUE—now on display at the Turnbull Townhouse through April 30th—encourage active engagement, inviting his viewers to parse through what is real and to maybe even have fun while doing so. 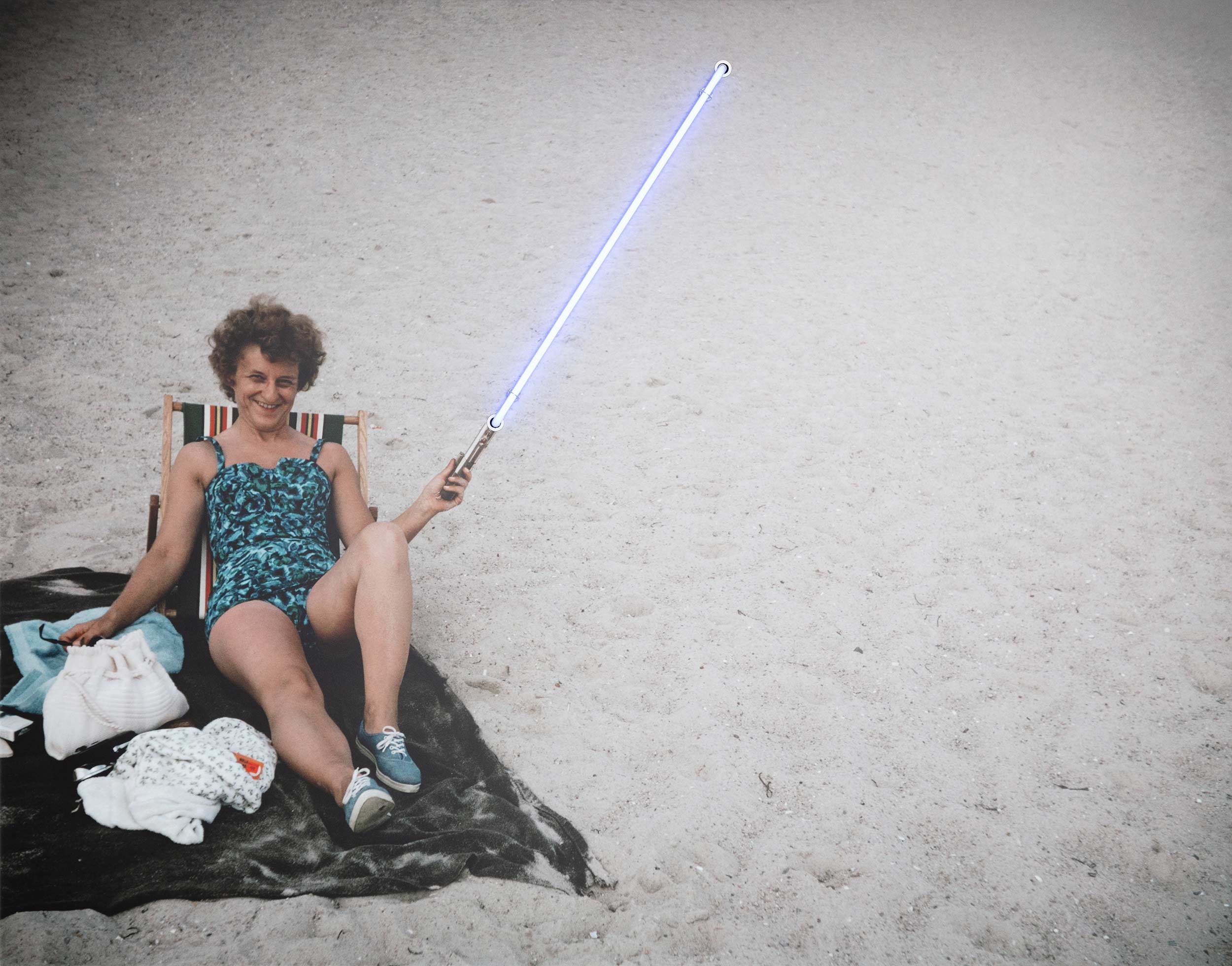 Caroline Reagan: Wow, I love this lightsaber. Can you walk me through this piece?

Sam Fayed: This is Granny with a Saber. For all the works, I’m taking existing archival 35mm prints, I’m wet-mount scanning them, and then I’m having them made into C-prints, which is a really old style of what photographers used to use. I’m doing photo composites to them digitally, and then I’m adding neon tubing. The thing that gets me really excited is that over time, the neon will burn its residue into the actual image. I’m using silver halide to print these, which is what a photography development room uses. So, there’s actual photochemical stuff happening. With digital photography, that stuff doesn’t age. I actually want stuff to burn out.

Caroline: So, the burnt neon will distort the image?

Sam: It won’t distort the entire image, but it will leave a small mark on the print. So, if you turn that [the neon light] off, you’ll see what basically looks like a glove. And obviously, she wasn’t really holding a lightsaber [laughs].

Caroline: All of the photographs in your work are found. How did you encounter the images and what drew you to them?

Sam: I actually purchased a trunk at Brimfield, an estate sale lot of old photography. I basically took the trunk, looked through it entirely, and started to build a series of stories around each image. They are really simple moments, a lot of family photography—outings from the ’60s. It’s cool to look at a complete stranger and be like, ‘Ok, maybe she had a lightsaber. Who was her uncle?’ 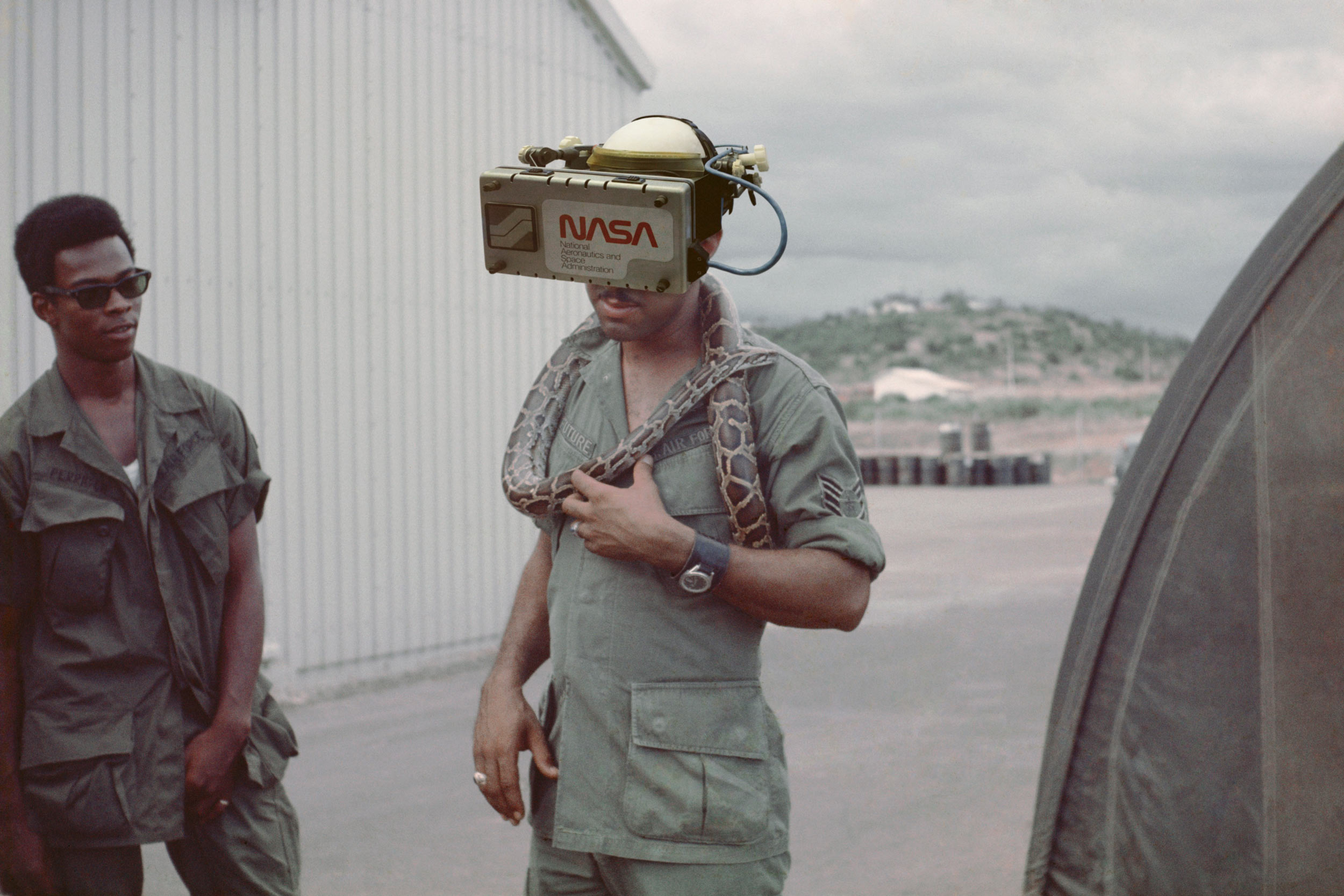 Caroline: Do you find that the distance between you and these subjects—strangers from the past—makes narrative-building more exciting?

Sam: Absolutely. I’ve always felt sort of like a fringe character myself. I wasn’t born in the States; I was born in London. I’m half-Egyptian, half-English—so I’m really fascinated by the whole cowboy, Americana thing.I take pop icons who already look like people in the photographs that I’m sourcing. So, for this one, [Summer!] I didn’t just pick Clint Eastwood, the guy in the photograph originally looked sort of like a young Clint Eastwood. This woman here looks exactly like Paul McCartney, so I photocomposited those faces in. I’m creating these absurd realities with these images.

Caroline: In your statement, you talk a lot about ‘manufactured authenticity.’ That certainly comes across here.

Sam: Completely. These works are photorealist, so the takeaway for you as a viewer is to wonder: ‘Was Burt Reynolds in a 1960 lucha libre fight? Probably not.’ We believe everything we see. There’s no vetting of truth, and we’re at a point with technology where you can make an image look completely photoreal. We’re blurring those lines, and that’s something I really like to explore.

Caroline: It’s interesting that you’re exploring this conflation via analog and old photographs.

Sam: The idea of blending technology with a really traditional media format, film, is an unusual thing. That’s why, when I was thinking of titles for the show, I thought RESIDUE would be good because film has residue—it’s a physical medium. You can pour coffee on it or flashbulb light it, and you can see that physically. Whereas, with digital mediums, you’re recreating a rendering of that. So, the goal is to come out of the show having seen this residue…that I’m leaving these marks on these traditional formats. You know: ‘Is it real is it not?’ It’s fascinating to me to see what’s happening now with the media, with this deepfake movement and misinformation. You see a video, and it might not be Nancy Pelosi or Donald Trump. It might be someone just comped onto that, but it looks real and it feels real. We live in a weird time. 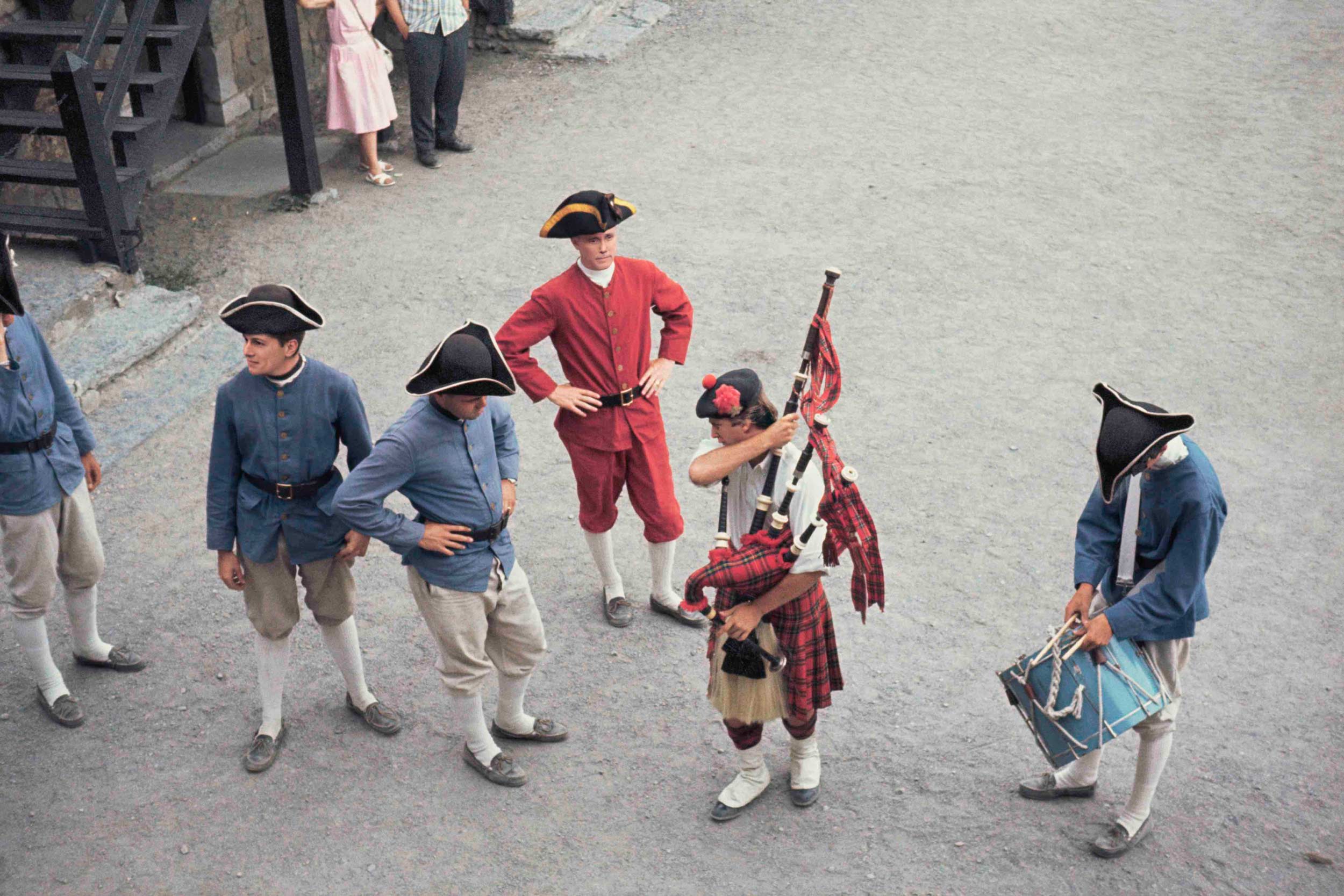 Caroline: [Laughs] Oh yeah, we do. And deepfakes are infiltrating ads too…

Sam: I mean I think we’re going to get to a point where we don’t even shoot campaigns anymore. It’s just rendered artificially on the computer. Like in fashion, are those runway shows even going to exist anymore or is it just going to be a rendered bunch of models with looks? It’d probably save money for the brand, but also, you could put anyone’s face in there. You know? I’m sure you’ve seen all the shows…coronavirus inspired.

Caroline: So absurd. What did you think of that?

Sam: I thought it was bizarre. I feel like, whatever medium—fashion, film, visual arts—whatever you’re doing, you’re drawing from the environment around you. We live in fear…are bombarded by media that is fear-based. Things start to become a film set, a narrative, around what is happening in reality.

Caroline: In responding to the coronavirus in that way, do you worry that these brands exacerbate the environment of fear we inhabit?

Sam: I think it does, and I hope, whoever is behind it, wants people behind it to maybe see the absurdity in it. Like with my pieces, I hope people seriously engage with them, but I also want them to laugh sometimes. I hope there’s some humor in that because I think humor is necessary. 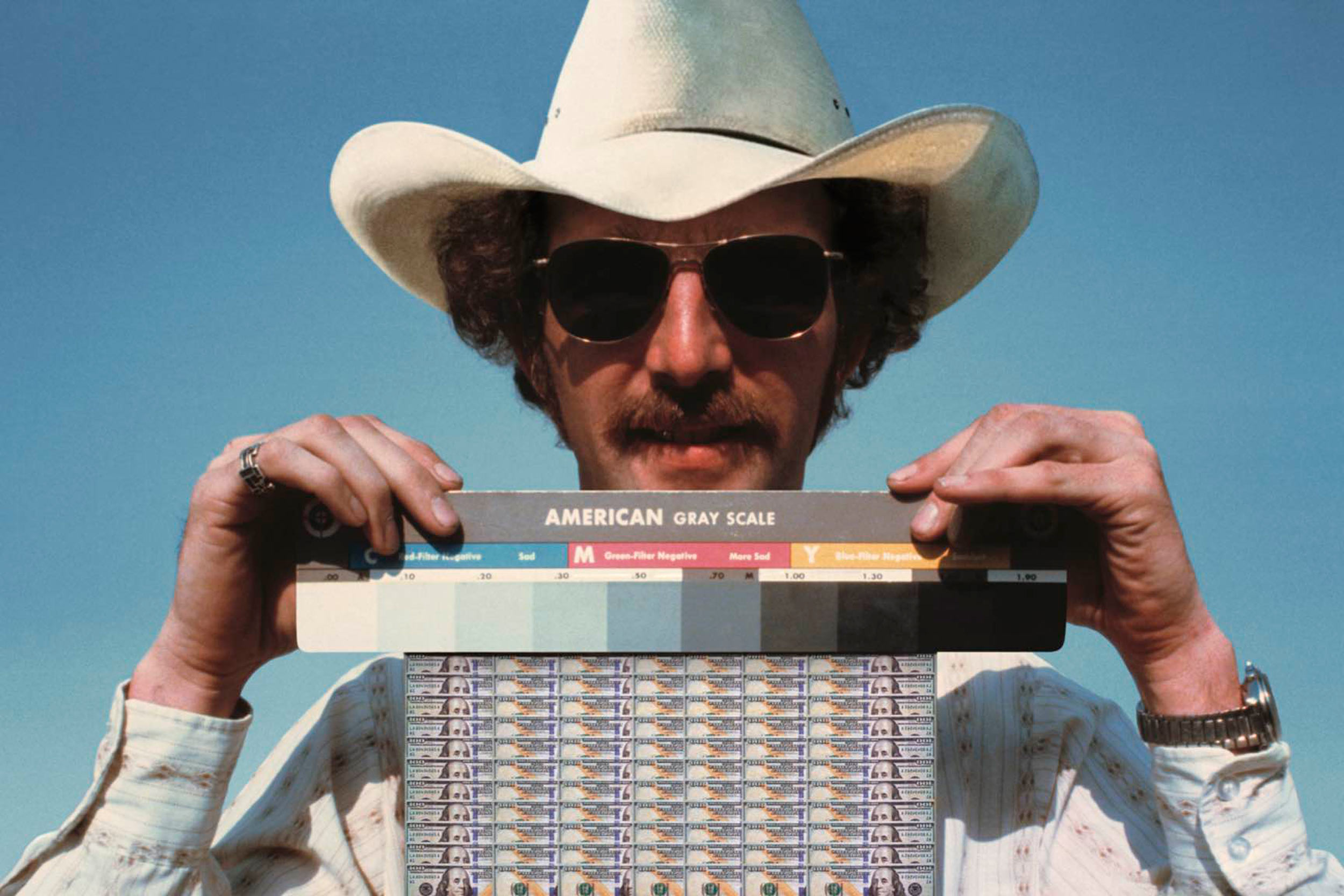 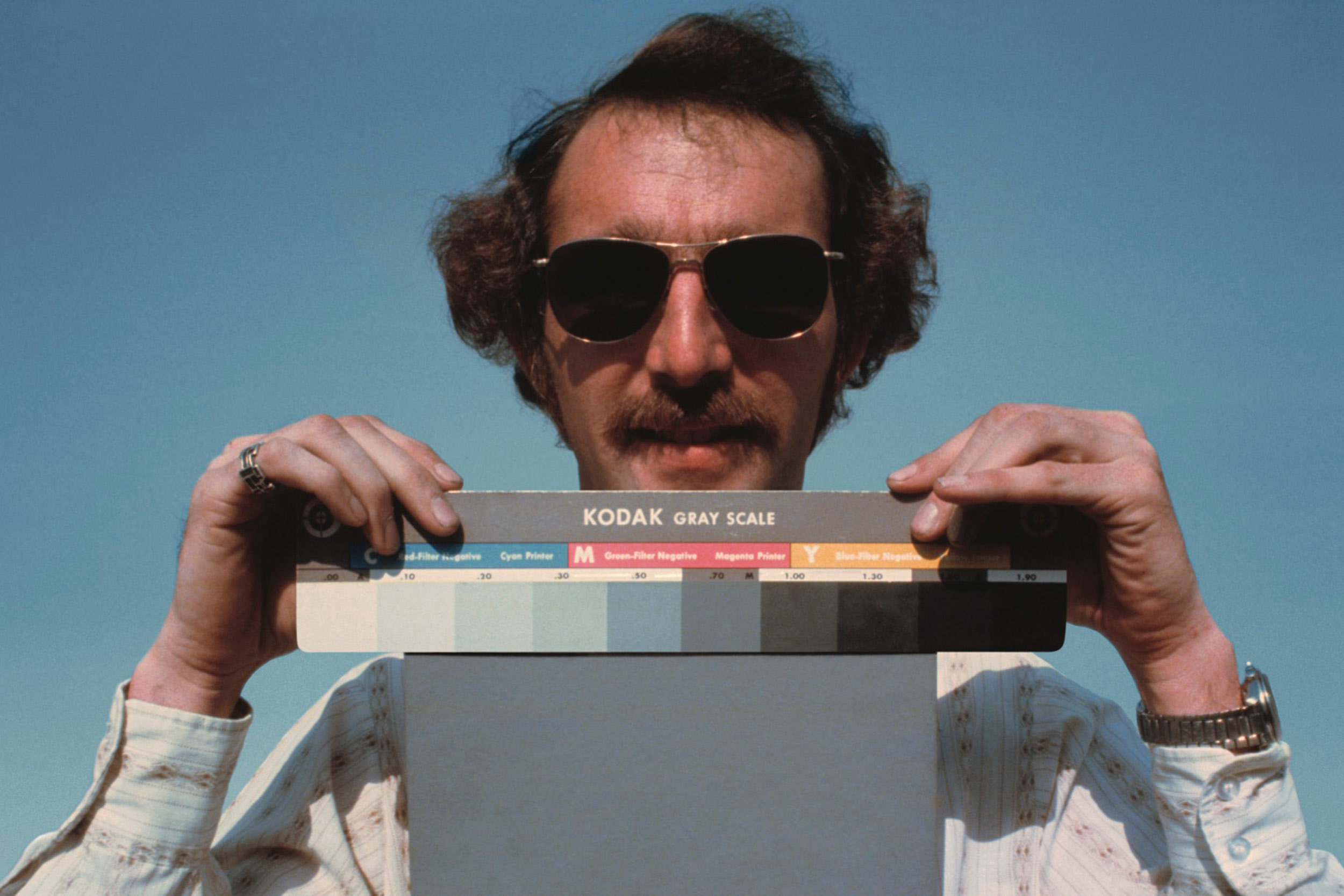 Caroline: It’s definitely a good antidote! How did you arrive at multimedia? I know you have a film background.

Sam: I studied film at UCLA—went to that mad place called California. Digital was just happening. I was still kind of holding out, shooting a lot of documentaries on film. I had an old camera back there, a Bolex, which is ridiculous. It looks like a swiss watch—you roll-crank it. That’s how I started on the analog side. The neon just kinda came, and I think it’s subconsciously from being a musician for many years and being on tour. I think that’s another thing we could get into a wormhole on—will there even be shows in the future? With physical people? It’s odd to set up and play in front of people.

Sam: Definitely. So, the neon is some kind of leftover residue from those days. I spend a lot of time sizing the neon. There’s a purpose for it because not everything needs neon. I don’t think anyone wants to come in here and be blown away by thousands of watts of neon. I shoot digital as well. For me, it’s been about mashing all those mediums up. 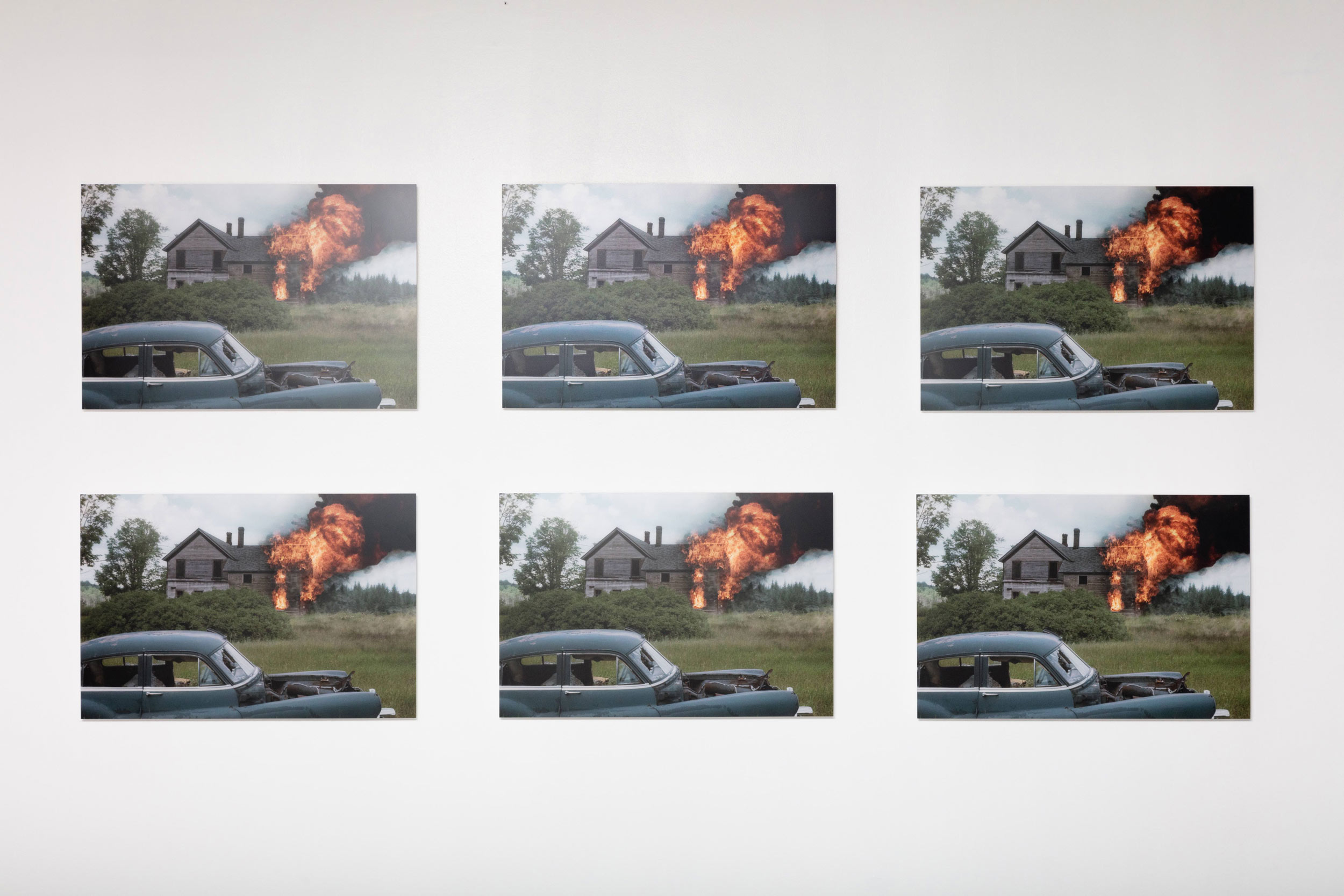 Caroline: And why do you prefer analog over digital? Is analog inherently more authentic to you?

Sam: I feel like I probably should have been born in the ’60s or ’70s because I’ve always loved traditional formats. I love old films; I love classic Hollywood cinema, old Japanese cinema. I just love things that are old and imperfect. I think it may also be a result of growing up in a family business—Turnbull & Asser is a very eccentric brand.

Caroline: How did moving around a lot impact the way you see the world?

Sam: I think being a weird, nomadic kid inspired me to observe things. I feel like all of this [the exhibition] is an observation of a moment. It’s taking what is seemingly a simple thing—a guy passed out in a park—but I’m creating a path that wasn’t there and adding a streak, putting lipstick on him. I’ve travelled around a lot. I’ve been in situations that have been great, funny, sad—whatever you want to call them. I just pull from that and put it through a lens.

Caroline: In many of your pieces, the prints are replicated. Is this choice expanding upon your investigation of ‘manufactured authenticity’?

Sam: Whether I repeat things or not is purely an aesthetic choice. I spend a weird amount of hours looking at an image. Maybe this comes from my textile background—when you look at a cloth, you’re seeing a warp and a weft, so you’re looking at repeats a lot. So, I already know if I’m going to repeat something on a larger format when I see a slide or work on the image. But I always try to make it a repeat if it’s going to enhance the visual narrative. Like with this particular image from the Vietnam war [Get Me Out of Here]. To me, this is a really bizarre, dystopian image—a bunch of troops examining another culture perform that they’re fighting and killing. So, I wanted to create this psychedelic, dystopian tapestry from it. You get this warp effect, very Apocalypse Now. This one’s pretty depressing once I get into it. But it’s also funny—like ‘what the fuck is this?’ 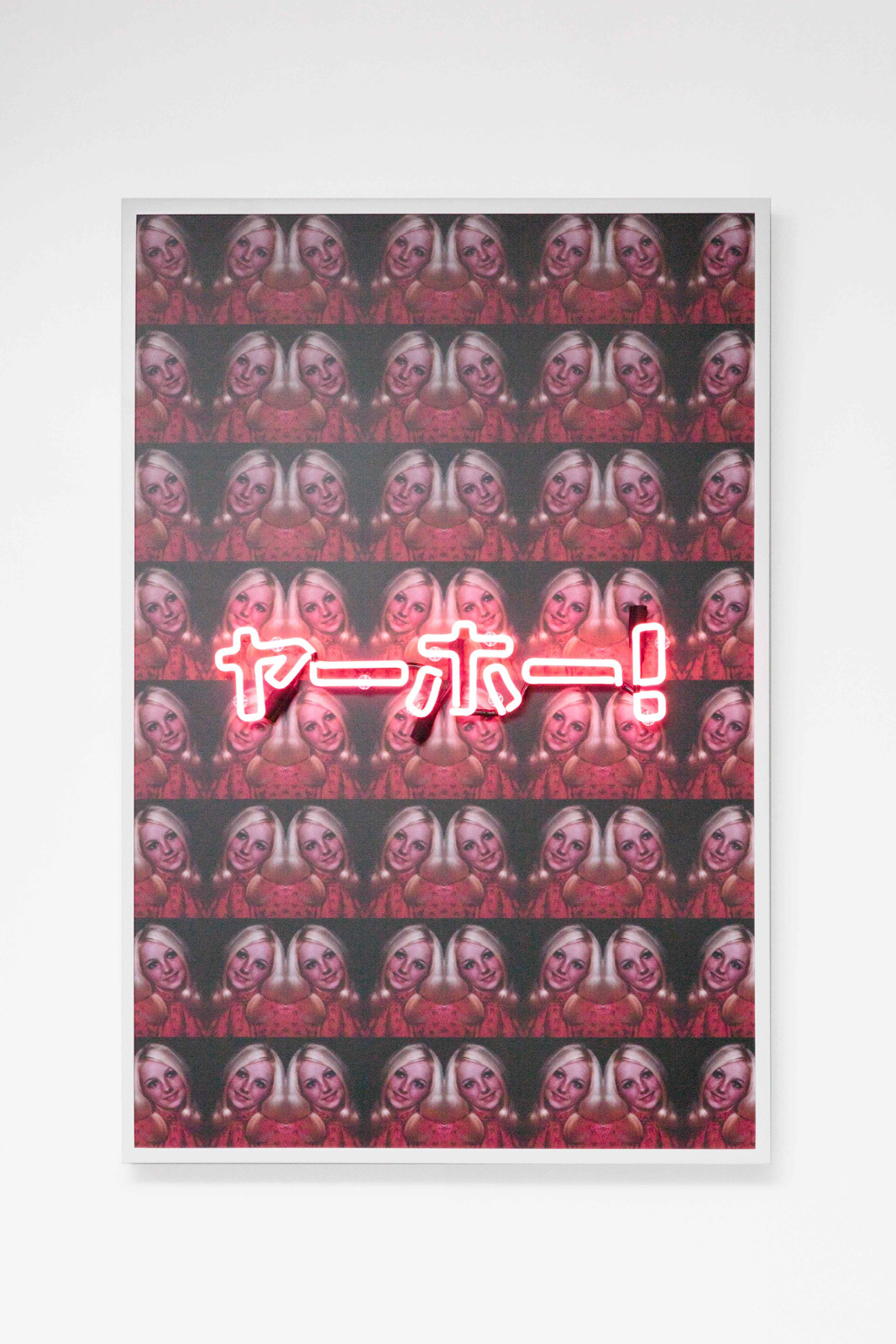