Denny spoke to Document about the politics of power dressing and how Thatcher's neo-liberalism shaped Silicon Valley.

What do Silicon Valley and Margaret Thatcher have in common? Plenty, according to Simon Denny. The Auckland-born, Berlin-based artist draws parallels between the two in Security Through Obscurity, on view at Altman Siegel in San Francisco through February 22. Denny purchased a number of Thatcher’s scarves at auction, repurposing them into two symbols of Silicon Valley: the Patagonia Nano Puff Vest, the de facto uniform of the tech bro, and the sleeping bag, an item which serves as a regular bed for those plagued by the rampant homelessness in the Bay Area. By doing so, Denny connects Thatcher’s neoliberal policies to the growing gap between the privileged techies and the less-fortunate homeless, who live in close proximity to one another in San Francisco and the surrounding suburbs that make up the Silicon Valley.

Document questioned Denny about his impressions of Silicon Valley, how he acquired the former British prime minister’s scarves, and how Thatcher’s policies affected him as a citizen of New Zealand, a country that is part of the British Commonwealth. 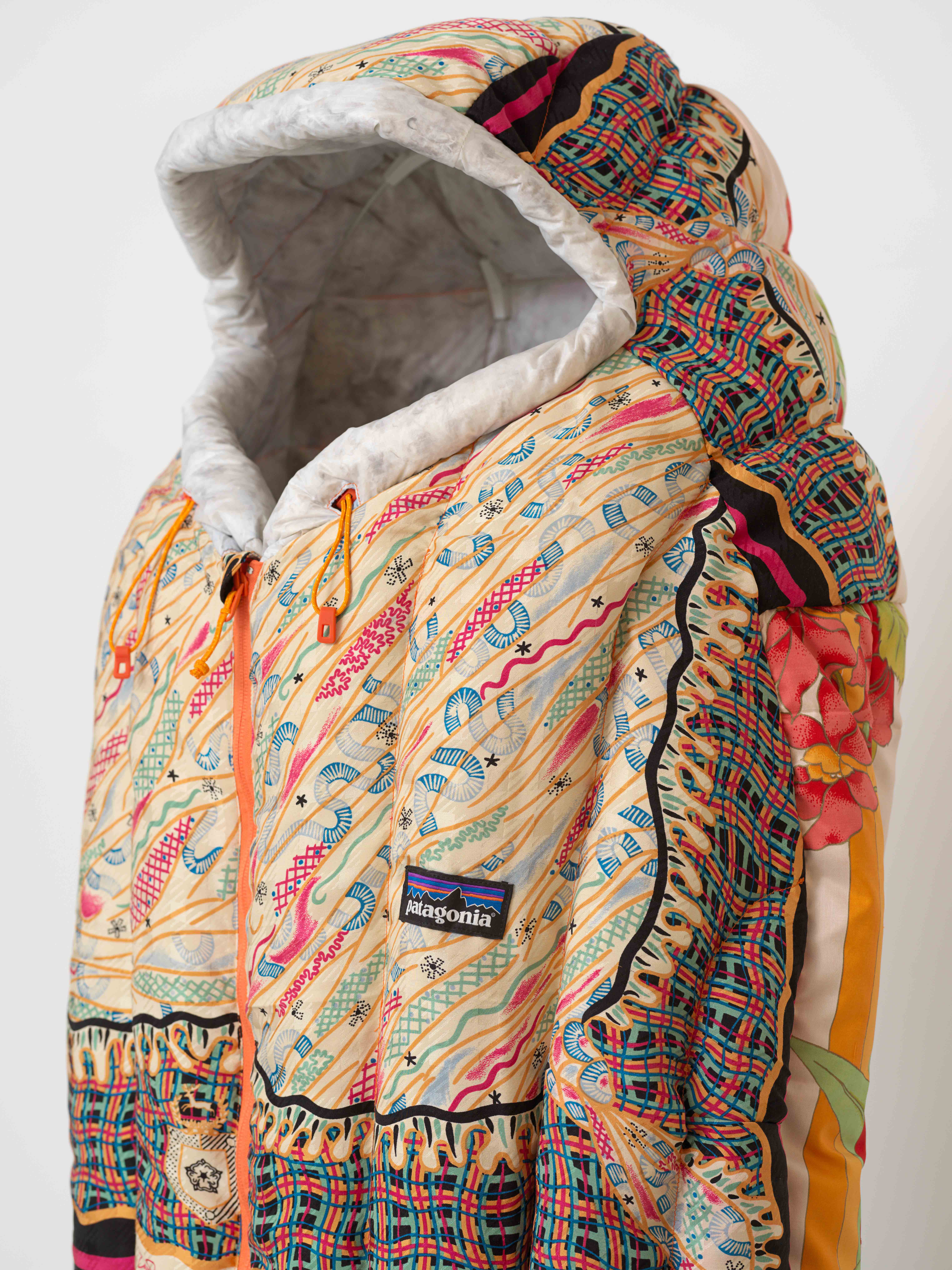 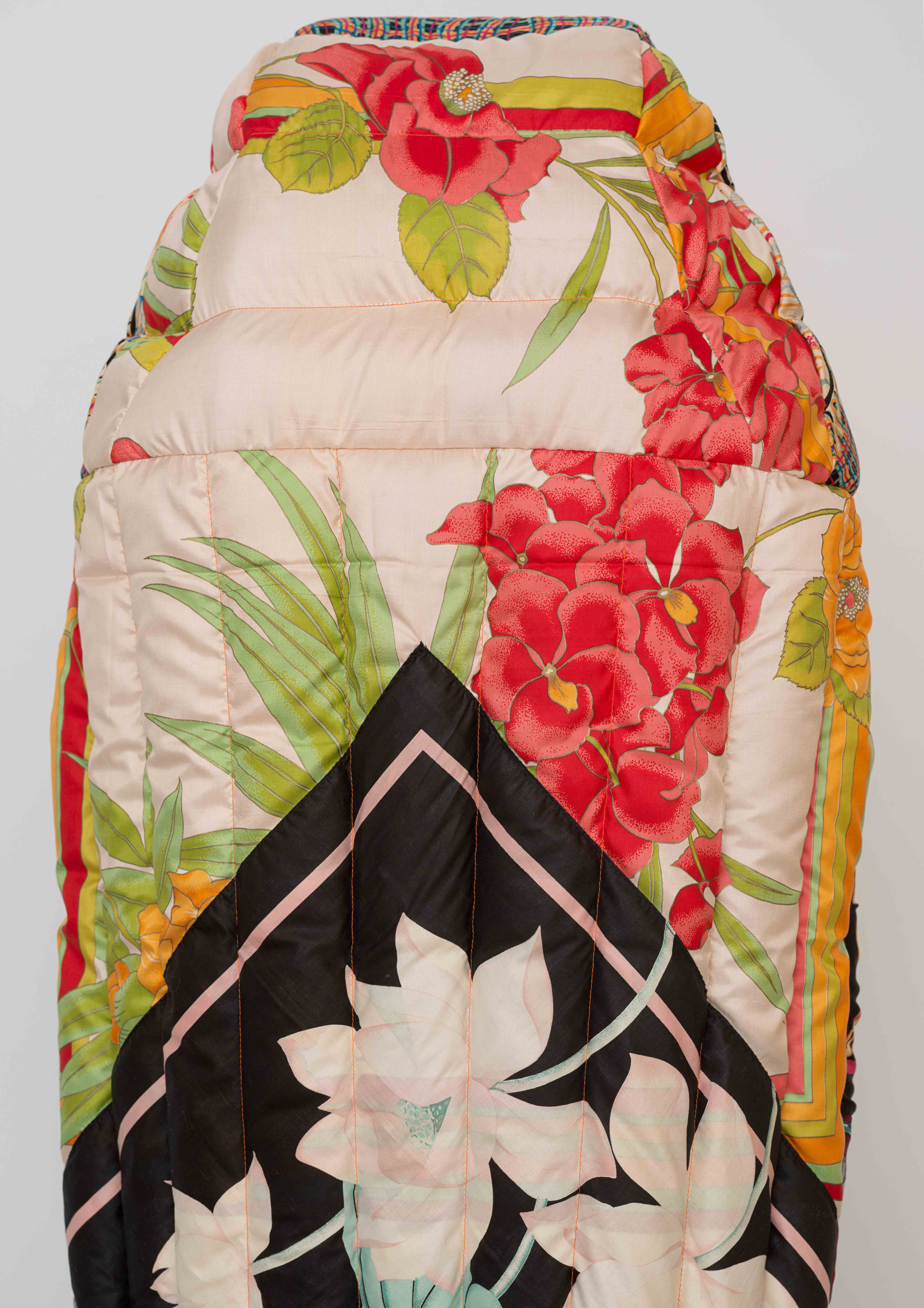 Ann Binlot: As an outsider, what are your observations and perceptions of Silicon Valley?

Simon Denny: It’s a place where I’ve met people I have learned a lot from entangled with what feels like some exaggerated phenomena that are visible elsewhere in the US, but in quite different dosages. The wealth and poverty are so visible—as is the contrast between those who are able to take advantage of the fluidity and flexibility of capitalism and those who are really not. Physically it also reminds me a lot of the city I grew up in—Auckland, New Zealand. The car-centric infrastructure, wooden housing in the same colonial architectural style, hills, harbor, proximity to tree-filled parkland and beaches all feels very familiar. And tons of highways emerging from suburbs and back into suburbs again. The entrepreneurial culture fuses with an uncanny suburban tranquility—where that culture seems to thrive. It’s at once stimulating and unsettling—in kind of a David Lynch way.

Ann: What came first, the idea for the project, or the purchasing of Thatcher’s scarves?

Simon: Buying the scarves. Once I had seen them listed for auction, I couldn’t not think about them. The patterns are very suggestive. I guess I have a canon of people in my head that have contributed to the kind of culture my work looks to unpack, and Thatcher is definitely one of those figures. In that sense the work had been emerging in my mind before I saw the scarves—but the discovery of the scarves made something imminent more concrete. Suddenly I had a material to address this uncanniness, to filter through power vests, another nascent icon that had been weighing in my mind for a while. 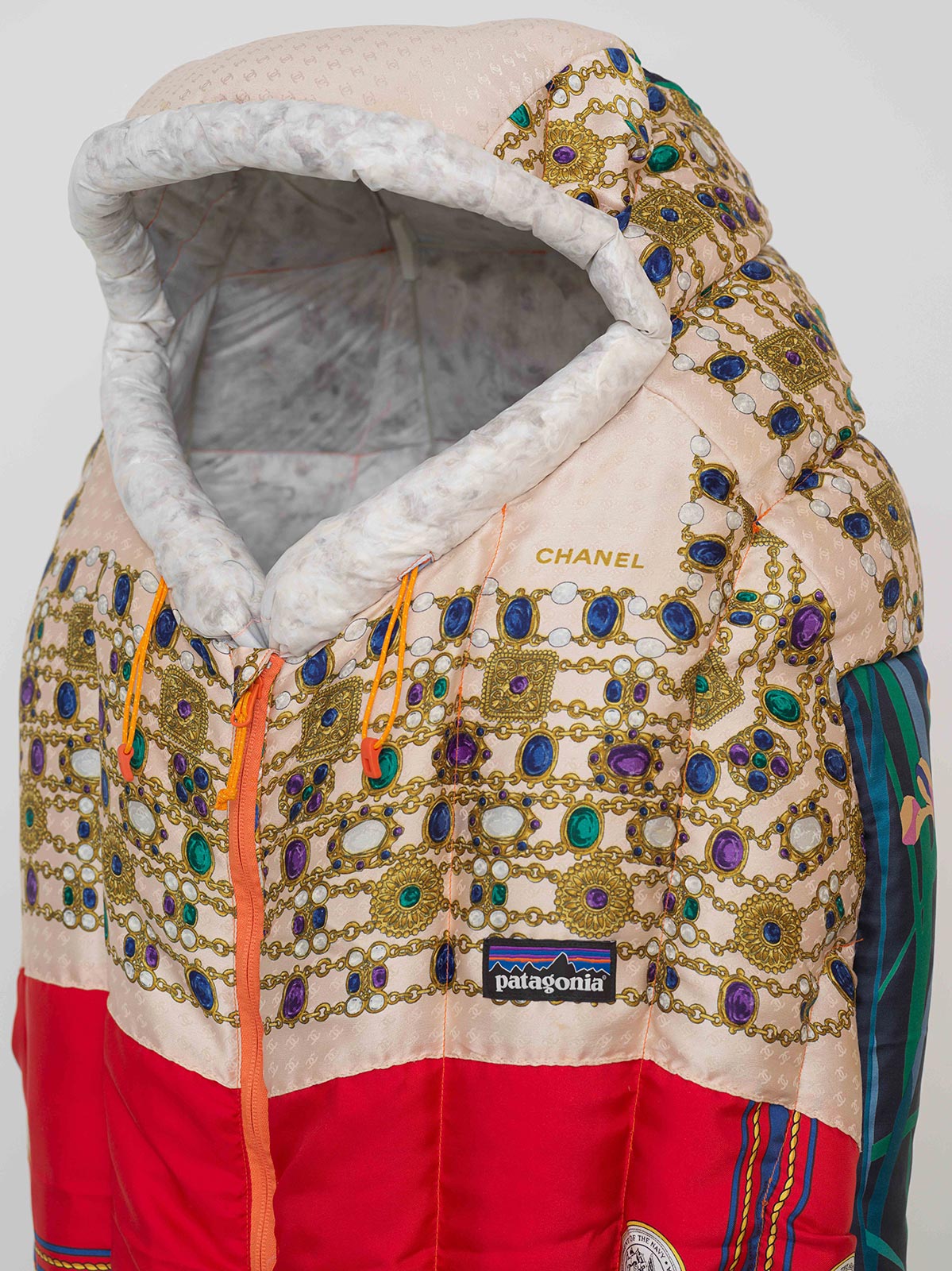 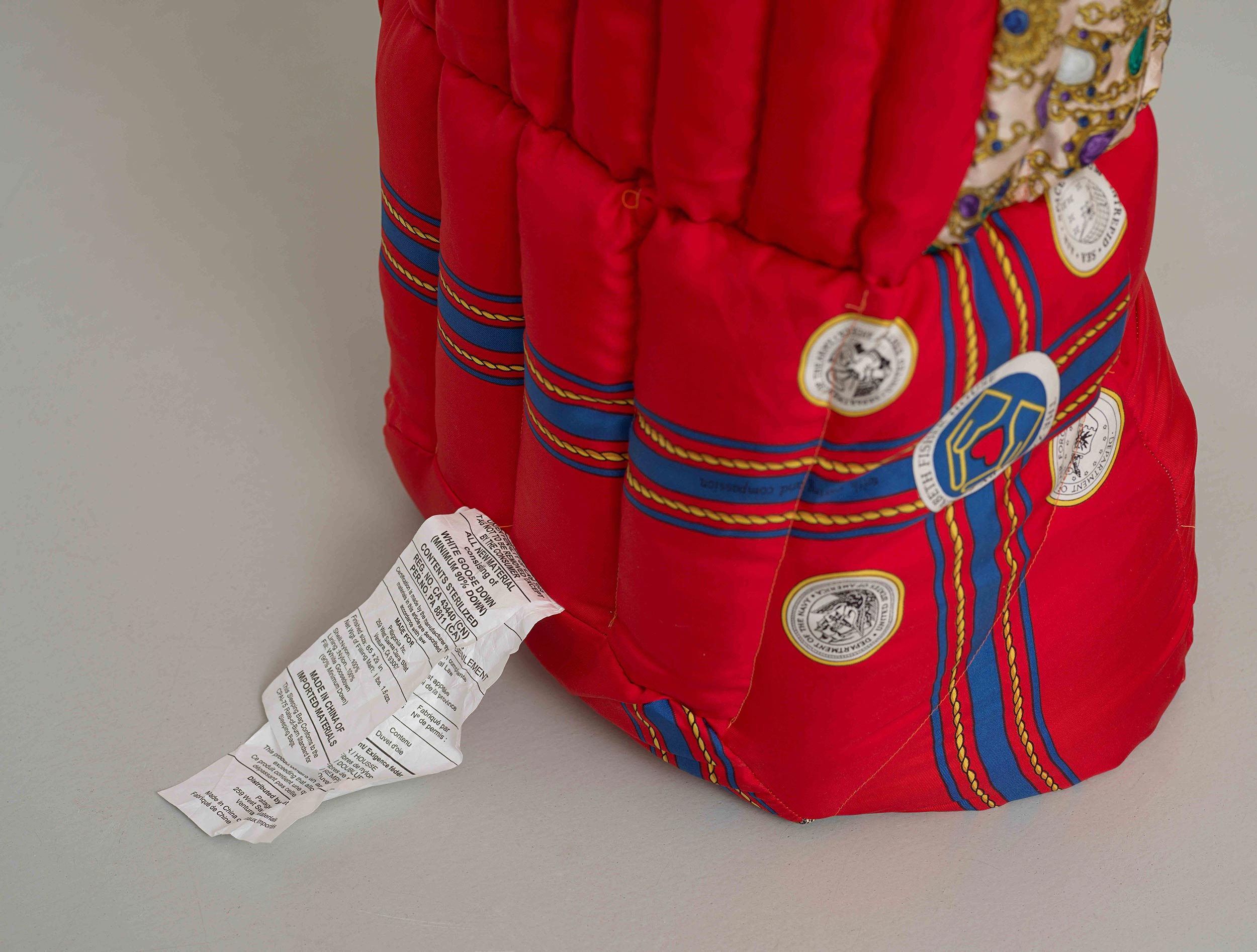 Ann: Were they expensive?

Simon: Yeah, they were for me… but considering what they are and the provenance, possibly not overvalued. The estimates in the auction were much lower than what they sold for. I think other people wanted these scarves too. Teresa May was famously seen after the auction wearing a particularly iconic bracelet of Thatcher’s that sold to an anonymous bidder so… some competition there perhaps.

Ann: What do Thatcher’s scarves symbolize?

Simon: To me they are exemplary of a way of dressing that I associate with her as an icon. Along with the pussy bow blouse and the skirt suit, silk neck scarves speak to the balance of conservatism, affluence and power that one associates with Thatcher. The patterns on these scarves were also evocative beyond the format. One that jumped out immediately was peppered with Forbes magazine covers and the phrase ‘Capitalist Tool.’ There were several that must have been diplomatic gifts that speak to Britton’s geopolitical ties—a bright red US veteran’s charity scarf and a scarf bearing the prime minister of Thailand’s signature. There’s one dark floral scarf from Liberty of London, a store synonymous with British affluence but also with a name that resonates with notions of liberalism. Another one is suggestive of a more clumsy colonial symbolism—a leopard-skin scarf with the word “Africa” on it. 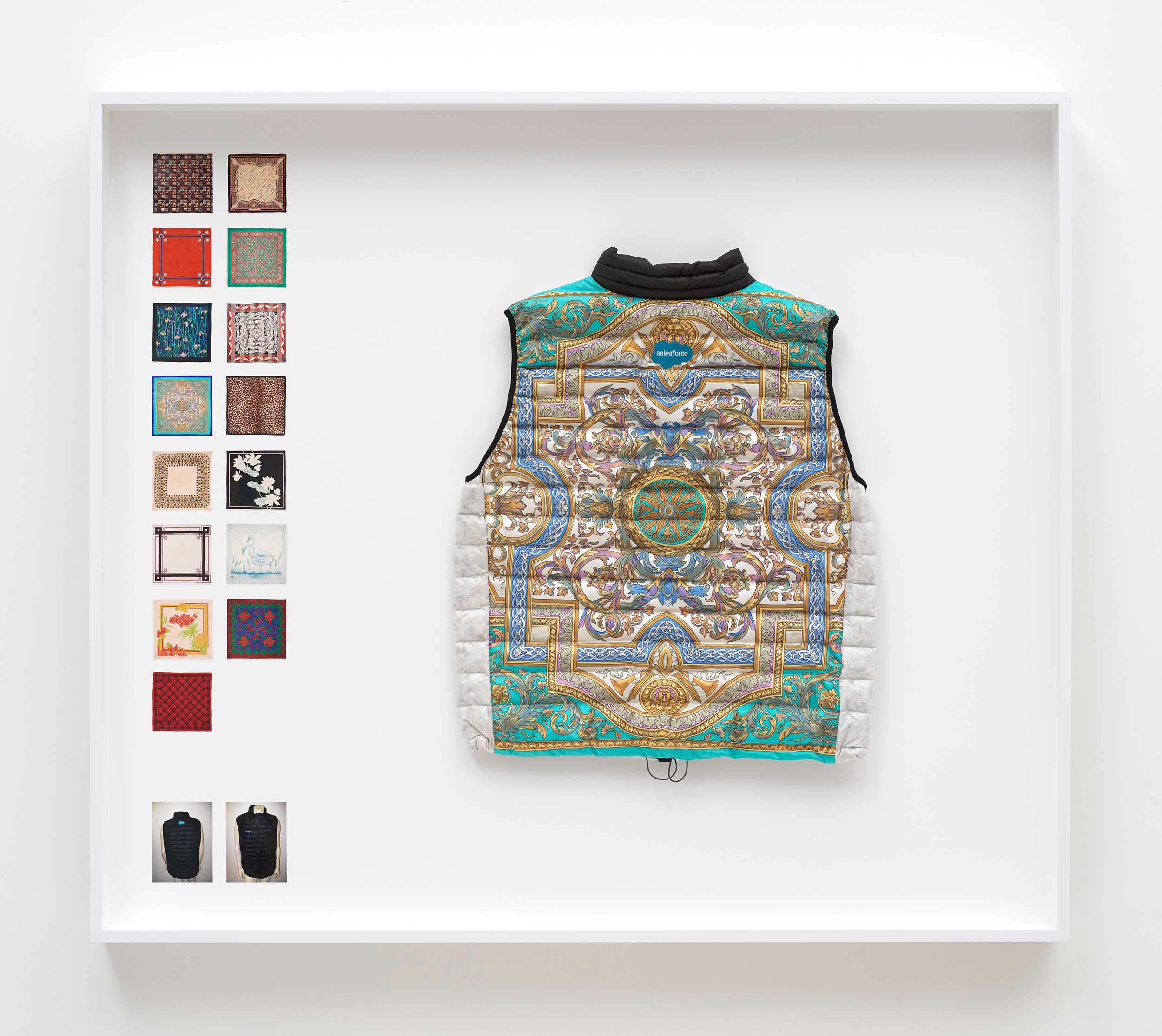 Ann: Growing up in New Zealand, in what ways did her policies affect you and your surroundings?

Simon: New Zealand’s Parliament and policy in the 1980s echoed Thatcher market-based reforms. Ironically the New Zealand Labour government (not New Zealand’s National conservative party) at the time liberalized the economy, sold state assets, deregulated finance, and encouraged an understanding of society as a competitive marketplace of individuals. I think the political imaginary of Pakeha (indigenous Maori name for white New Zealanders) New Zealand has often been influenced—if not directly, then indirectly—by Britain. It’s a place where the marks of the colonial past are everywhere. Thatcher visited New Zealand as Leader of the Opposition in 1976 and befriended the then-Prime Minister Robert Muldoon. So she was visible in the country even before she became the leader of Britain.

Ann: Why did you decide to recreate the Silicon Valley uniform with Thatcher’s scarves?

Simon: I see a continuity between her financial and social policy and the conditions that underpin the global web businesses which make up Silicon Valley’s power. A belief in global free markets, the centrality of the notion of the individual as the central addressable unit of any kind of society or group—these are things that Thatcher became an icon for; her notions that ‘there is no alternative’ [to market-based capitalism] and ‘there is no such thing as society. There are individual men and women and there are families.’ I think we’re barely aware of these assumptions anymore, because these assumptions about the market’s inevitability and the individual have become so naturalized. To me, to remake the icon of the individual container from Silicon Valley—the Patagonia-branded power vest—was to remind myself of how much continuity there is in those positions. And as I was planning the vest, I came across the sleeping bag designs—another garment for an individual, that comes from the same rugged outdoorsy individualist romance as a product, but that speaks of a very different outcome of those same market systems. The sleeping bag speaks not to the triumph of market forces, but instead to its difficulties evenly spreading its benefits. 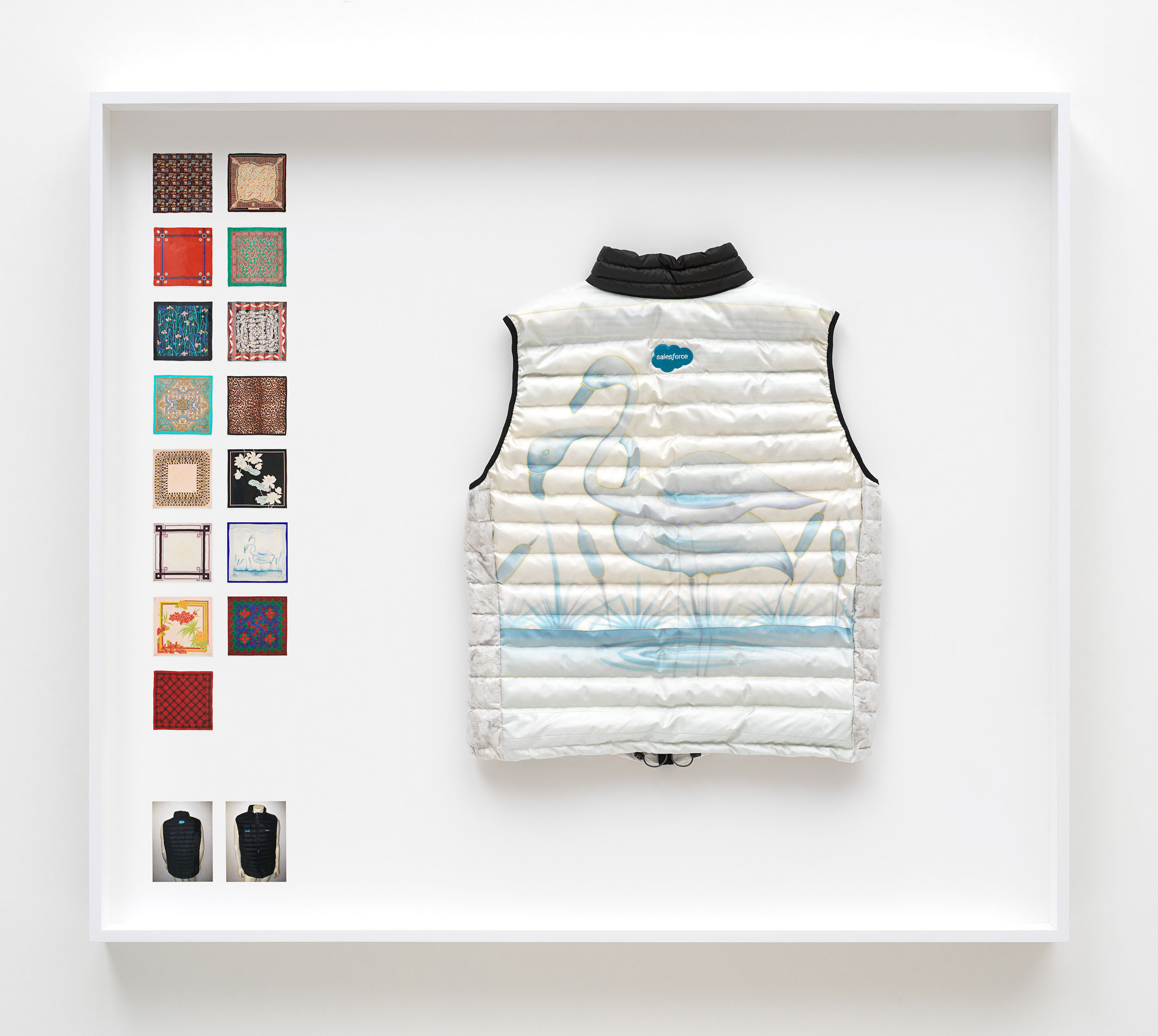 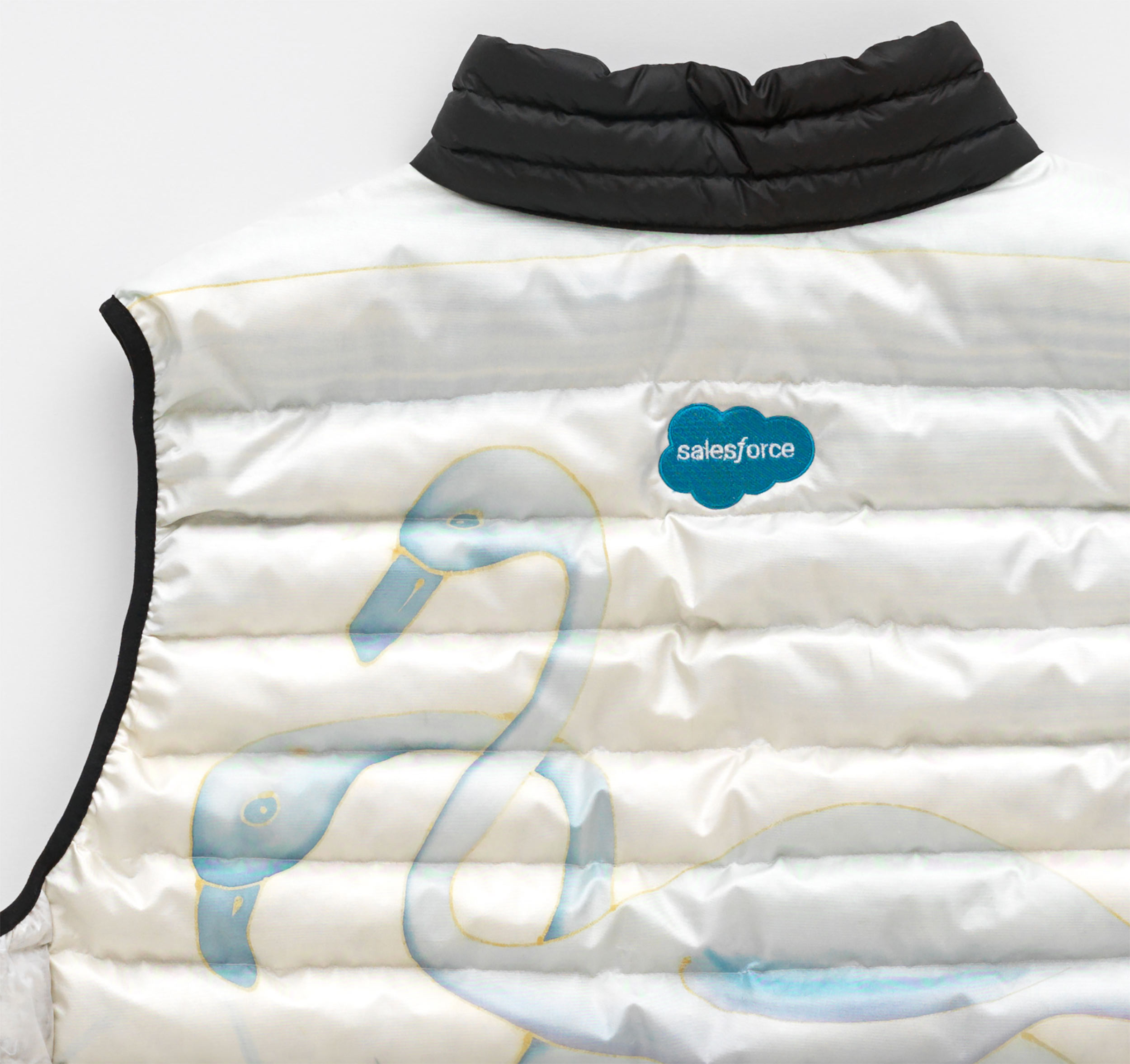 Ann: With all the wealth and intellect in Silicon Valley, why do you think tech entrepreneurs have been unable to solve the homeless problem?

Simon: I think it’s a systemic result of adhering to the market logic Thatcher has come to represent. Single actors or businesses, no matter how large, likely cannot ‘solve’ what is a broader problem. There’s a fantastic Wired article by a journalist called Chris Colin which recently came out addressing the wealth and policies of Marc Benioff, the CEO of Salesforce (a company which is also very present in my exhibition). Benioff is known for his generosity, his philanthropy, and his outspoken stance on civic and social policy. He’s asserted ideas that people like him should be paying more taxes, companies should not be able to avoid payment in the way that they currently are, and more spending should be directed towards those who are not able to access permanent shelter. He’s given money to schools and other social institutions. But the article highlights the difficulty of this position—Benioff can be as generous as he likes, but the systems and incentive structures that he exists in are larger than any individually generous CEO is able to compensate for. As he himself speaks out against tax avoidance, Salesforce does all if can to appease the shareholders who own it and maximize profit, thus avoiding as many taxes as it can. I think systemic change has to be beyond an individual or a region containing powerful businesses—they’re successful examples of how our system is designed to work. How could they adequately address some of the negative externalities of that system as they continue to thrive in it?

Ann: Is Silicon Valley changing the world for better or for worse, and why?

Simon: That’s quite a question. Again, I feel like the companies in Silicon Valley are able to take advantage of and thrive under certain tendencies in contemporary North American and global capitalism. That’s impressive, and some of the products and designs they’ve implemented are incredible. Ways of working and values for building businesses that were crystallized here are admired all over the world—I’ve seen copies of Zero to One in startup founders’ hands from Berlin to Auckland to Shenzhen. I would not necessarily put the agency or the achievements in one place like this—these businesses are some of the more visible success stories of global business today also because they are consumer-facing. They rely on a whole raft of other interconnected systems and business—from mines in the Congo to vast energy grids—to function. I think one can’t say Silicon Valley is changing the world—it’s more an outcome of a longer arc of ways of organizing society which the Thatcher worldview is a part of. I think putting the agency here only is a misnomer. It’s just as I hinted at in my first answer—that some phenomena created by these larger systems are more visible here than elsewhere as a kind of microcosm. 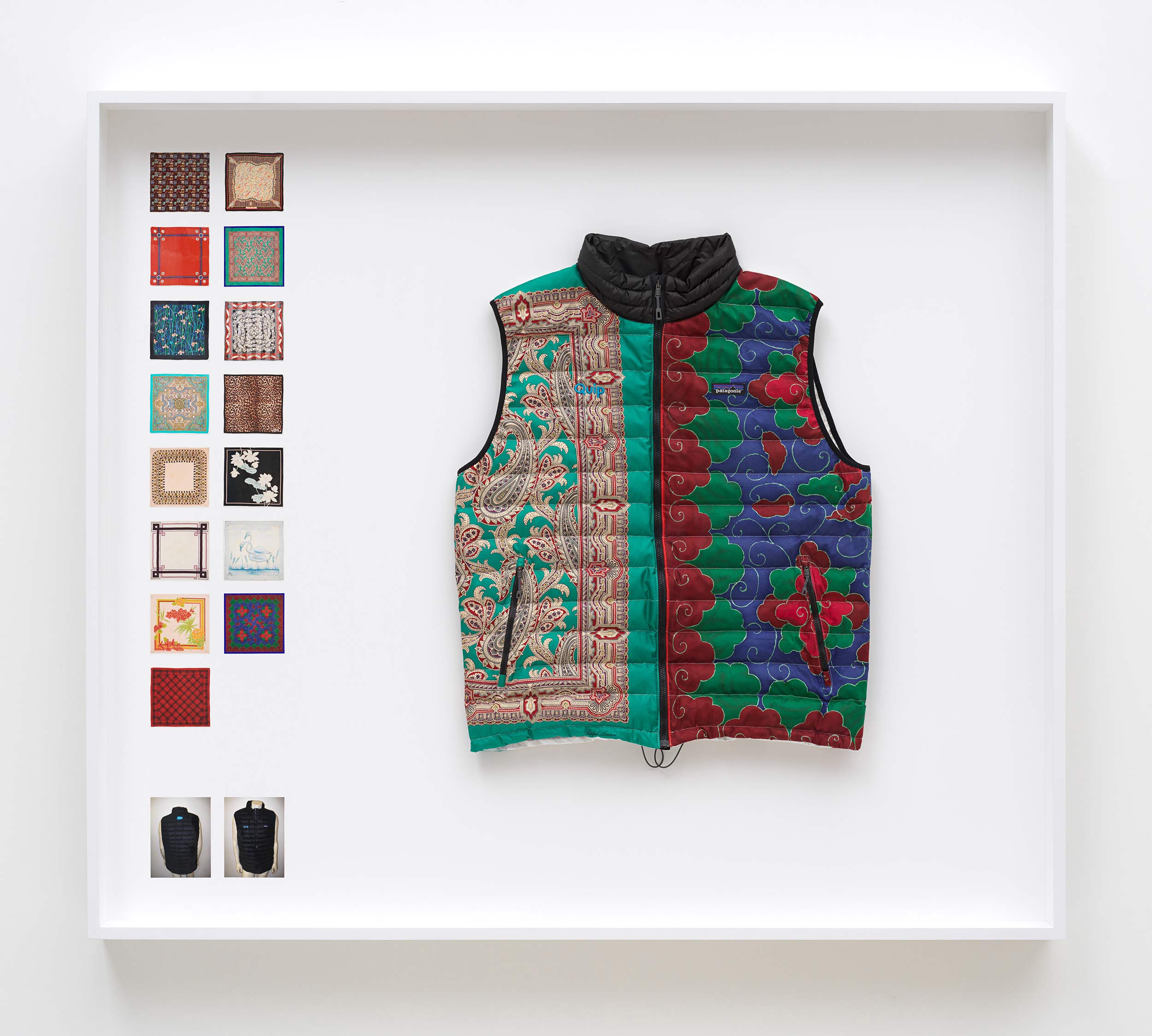 Ann: Where does Berlin land in all of this?

Simon: Well Berlin is where I live and work—so there’s something about the view from here baked into the work I imagine. Berlin’s a part of the same global system also of course and has a lot of history with the US and its global influence. There are technology startups here that ape the values and structures prominent in Silicon Valley. The same tendencies are visible—the power vest and the sleeping bag—just less concentrated.

Simon: I have a number of exhibitions planned this year which reconfigure this work in dialogue with other artists’ work and that revisit the work I showed in Tasmania recently, in my project Mine, which looks to connect digital extraction to physical extraction, with Australia’s mining industry as a kind of core example. With the recent fires in Australia and the debate there around what forces lie at the core of that tragedy, it seems important to tease out the logic of mining companies and lay them out alongside surveillance capitalist platforms—with a whole lot of giant machine reconstructions and a reanimated endangered bird.