Piecing together the fragments of the director's infamously opaque creative process with his new memoir, 'Room to Dream.'

David Lynch refuses to explain his art. If that wasn’t clear to his fans before last year’s 18-episode opus Twin Peaks: The Return, the filmmaker and artistic polymath’s biggest project of the social media age, they certainly got it after reading the press that surrounded the show.

“David Lynch breaks down the first four episodes,” one Entertainment Weekly headline promised, before the director spiraled off into a story about carpentry so dense he had to provide sketches. Asked if The Return was “an allegory for TV-watching,” however, Lynch replied, “No. But that’s an interesting way to think about it.” Months later, The Hollywood Reporter inquired whether the season’s cryptic ending was a cliffhanger or a philosophical statement.“I don’t really say things like that,” Lynch said. “But you know, I always say that there should be some room to dream.”

The phrase is so close to his inscrutable heart that Lynch repurposed it as the title of his new book. A collaboration with critic and journalist Kristine McKenna, Room to Dream is a predictably unconventional combination of biography and memoir. Instead of writing with him, McKenna constructed a narrative of her longtime pal’s life out of more than 100 interviews with his colleagues, family, friends, and (many) exes. In response to each of her chapters, Lynch inserted a chapter of roughly equal length, as though he ripped apart an existing book about his own life, scrawled in his own memories, then bound it back together as a 600-page tome.

Despite the vividness with which he narrates his seven decades on Earth, Lynch keeps his vow of silence regarding the ideas in his work, a fact McKenna forewarns. “The book is not intended to be an exegesis on the films and artworks that are part of this story; material of that sort is abundantly available elsewhere. This book is a chronicle of things that happened, not an explanation of what those things mean.” That it is impossible to separate facts from their implications is both the saving grace and the most glaring flaw of Room to Dream.

The early chapters of celebrity biographies are often the hardest to get through. Here, in Lynch’s hands, they’re the highlight. He provides rich, strange vignettes that close the distance between the director’s upbringing, work and worldview. Born in Missoula, Montana in 1946, Lynch moved around a lot as a kid. His kind, pious parents made a point of indulging his intellectual curiosity. “The word ‘project’ was so thrilling to everyone in my family,” Lynch writes. In 1955, the clan moved to Boise, where David spent days playing outdoors with a crew of neighborhood boys. It was an idyllic ’50s childhood, interrupted only by the deadening obligation of school, which Lynch still sees as a scourge. A rift opened between Lynch and his parents as he grew up, got into rock ‘n’ roll, moved to Virginia, met a wild crowd, and became increasingly fascinated by the dark side of life. “My father deeply loved both of his parents,” Lynch’s oldest daughter, Jennifer, tells McKenna, “but he also despised all that goodness, the white picket fence and all that. He has a romantic idea of that stuff, but he also hated it because he wanted to smoke cigarettes and live the art life.”

This is the tension that animates his work: Like so many artists of his generation, Lynch is obsessed with the rot festering beneath the gleaming surfaces of ’50s Americana. What makes his films so much more poignant and complex than most narratives written from this point of view is his lingering wistfulness for an era he experienced as pure bliss. The innocence of small-town youth and the illicit appeal of cigarettes, rock music, sex, coffee, and other trappings of “the art life” are constantly battling for control of his imagination. He loves Twin Peaks and Lumberton, but they make him claustrophobic.

Lynch has told many of these childhood stories before, most notably in the excellent 2016 documentary David Lynch: The Art Life. There’s the pale, naked woman he and his brother spotted limping by the side of the road in Boise one night, her mouth red with blood—an almost too-obvious forerunner to masochistic Dorothy Vallens (Isabella Rossellini) from Blue Velvet. He confesses to having become a “juvenile delinquent” in Virginia, befriending a “smoothie” who ferried friends to D.C. in stolen cars. “The thing that drew me to this guy was that I didn’t like my life, and I liked the idea of doing strange things, sort of. I liked it and I didn’t like it,” Lynch writes. You can imagine Laura Palmer scribbling these same words in her diary; like Twin Peaks’ fallen angel, Lynch was a different person at home, at school, and out among his crew of miscreants.

It’s his memory for resonant details that makes Lynch’s chapters so telling. In a passage on his Boise neighbors, the Smiths, he sketches a trio of Lynchian characters:

[Nana would] be out there with these gardening gloves on, with a mixed drink in one hand and a little spade in the other hand. She got the Pontiac that my family sold to the Smiths. She wasn’t completely deaf, but she was deaf enough that when she started the car she’d almost floorboard the thing so she could hear that it was on. There’d be a gigantic roar in the garage and you’d know Nana was going somewhere. On Sundays people in Boise went to church, and the Smiths went to an Episcopalian church. They had a Ford station wagon they’d drive to church, and Mr. and Mrs. Smith would sit up front with a carton of cigarettes. Not just a couple of packs. A carton.

Lynch brings the same humorous yet gentle voice to stories from his later life. He recalls pitching his still-unproduced script Ronnie Rocket (a Holy Grail for Lynch fans) to a producer in the ’70s with the timing of a comedian: “I said, ‘It’s about a man who’s three and a half feet tall, with a red pompadour, who runs on sixty-cycle alternating-current electricity.’ He said, ‘Get out of my office.’”

His celebrity anecdotes are singular. After the 1987 Oscars, Oliver Stone took home a directing prize that should have gone to Lynch, the Blue Velvet also-ran met the award’s presenter, Elizabeth Taylor. When he expressed regret that Stone had been the one to win a kiss from her, she called him over to even up the score: “There’s Elizabeth Taylor’s face right there and I lean down and I see these violet eyes and this face and I go down on these lips and I keep going down, her lips are miles deep,” he writes. A delicious paragraph of the book describes the greatest film Lynch never made: Marlon Brando apparently wanted to “dress up as a woman and have Harry Dean [Stanton] dress up as a woman, and the two of them would have tea together and ad-lib while they were drinking tea.” Unfortunately, “Marlon chickened out.”

Lynch’s writing has the same dark/light duality as his films: Gee-whiz ’50s slang pairs with profanity; his propensity for bland binaries like “good” vs. “bad” coexists with vivid descriptions. His vagueness about the intentions behind his work has saddled him with a sort of Andy Warhol, blank-screen persona, but in Room to Dream Lynch voices blunt opinions on everything from masculinity (“Macho guys don’t cry now, and it’s false”) to Dr. Oz (“a really good guy”). He’s unexpectedly open about his private life, too, whether he’s reflecting on his failings as a father and husband or likening masturbation to his most enduring love, Transcendental Meditation.

“What makes Lynch’s films so much more poignant and complex than most narratives written from this point of view is his lingering wistfulness for an era he experienced as pure bliss.”

Although he periodically flags interviews that contradict his memories, Lynch treats McKenna’s collage of narratives less as a record to be corrected than as a prompt for his own musings. For her part, his co-author is a thorough reporter and has an ear for astute insights. Discussing the contrast between Lynch’s dark themes and upbeat manner, she quotes Laura Dern: “I think part of his happiness has to do with the fact that he places no limits on himself as a creative person. There’s a lot of self-judgment and shame in our culture, and David doesn’t have any of that.”

Particularly in later chapters, though, McKenna is hobbled by an inability to analyze Lynch’s work in detail. There are pages on his negotiations with various suits, as well as on the comings and goings of employees. Tasked with describing his films, though, she clams up. Lost Highway is “one of the most inscrutable, difficult pictures of his career,” she writes. “With a running time of two hours 15 minutes, this is not a user-friendly movie. Unrelentingly dark, with a fractured, nonlinear plot that defies easy explanation, and sex scenes that opened him to accusations of misogyny, Lost Highway is a kind of declaration of independence.” Surely McKenna has more penetrating insights to offer on the films of an artist she’s been studying for decades.

She also comes off as a bit too invested—and, indeed, a bit more invested than Lynch is—in defending his goodness and artistic purity. Quotes from collaborators contain paragraphs of nonspecific, repetitive praise. Even exes and business partners with whom he parted on bad terms attest to his greatness. The book is full of reminders that Lynch hates money, but McKenna fails to reconcile that with his considerable personal wealth and advertising work.

She writes in the introduction that “nothing was declared off-limits,” and to both her credit and Lynch’s, McKenna covers his serial infidelity and acknowledges that he’s an “absentee father.” There’s a jarring quote from Rossellini, his former girlfriend: “David has this incredible sweetness, but…he completely cut me out of his life and left me with a phone call telling me he never wanted to see me again.” Neither McKenna nor Lynch touches the comment, leaving our thoughts to fester during other accountings of Lynch’s goodwill. And by most of these accounts, Lynch is a kind boss, a generous mentor, and a man who’s grateful for his success. At this point in his career, the case for his genius is self-evident. And if his freedom to work tirelessly is contingent on a staff that takes care of the boring stuff and a family that knows it comes second, that’s a debt he shares with most rich, straight, white, male artists. (At least he’s aware of it.) It must be awkward to write a biography that will be read first by your subject, though, and McKenna’s chapters suffer from a reticence to synthesize or, often, contextualize his films and his behavior. The best books about artists dig into the connections between their subjects’ lives and work. There is a sense that Lynch and McKenna are unwilling to plum the depths of his own psyche, much the way his work traverses the internal horrors and ecstasies of others.

Room to Dream would always have been worth reading for Lynch’s sections alone. As telling as his vignettes themselves are the moments he chooses to focus on; much of the chapter that covers the period between 2006’s Inland Empire and Twin Peaks: The Return, for example, details his journey to India for the funeral of Transcendental Meditation pioneer Maharishi Mahesh Yogi. But McKenna’s reportage yields plenty of intriguing reflections, too. Most of all, it gives Lynch a straight story from which to diverge—and that happens to be what he does best. 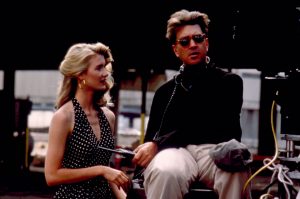