Within an industry rife with overconsumption and conformity, designer Raffaella Hanley dares to ‘Think Otherwise.’

It is the best and the worst of times to be an eco-conscious fashion designer. As awareness of our planet’s demise escalates, so, too, does the reign of fast fashion. Yet, many designers—particularly those who are fresh to the industry—have been galvanized by this predicament, meeting fashion’s fraught landscape with finely tuned creativity.

In New York, Raffaella Hanley of Lou Dallas has made it her mission to subvert conventions of consumption. Known for her whimsical, one-of-a-kind pieces, often made in collaboration with other downtown artists like Will Sheldon, Hanley has recently expanded into hoodies and tshirts, retaining her signature conscientious individuality by closely overseeing the production process. When the designer sat down with Document at a West Village coffee shop, she grew effusive when speaking about curbing quantity and turning to regenerative materials. From sourcing to showcasing, Hanley ensures that Lou Dallas truly does ‘Think Otherwise.’ 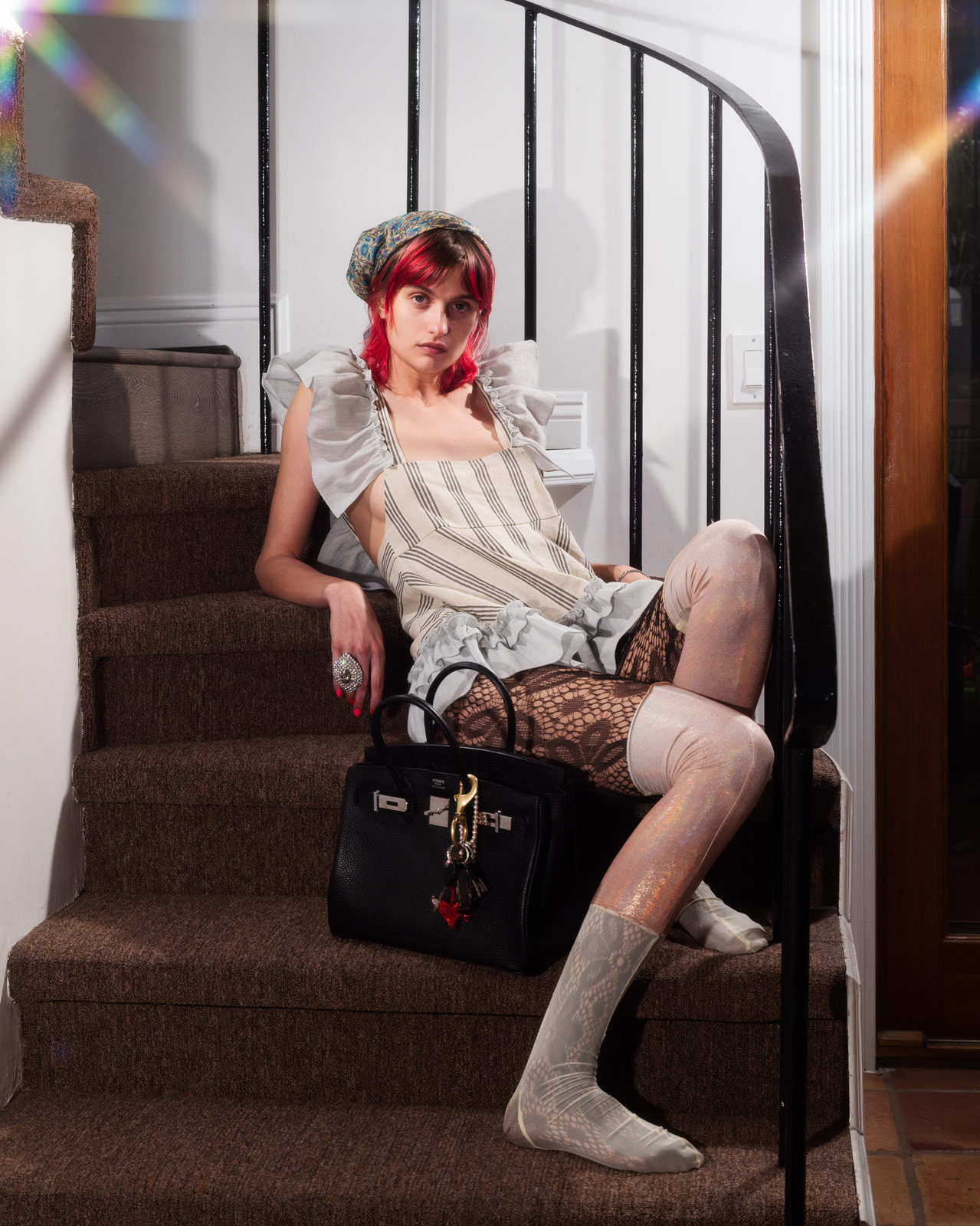 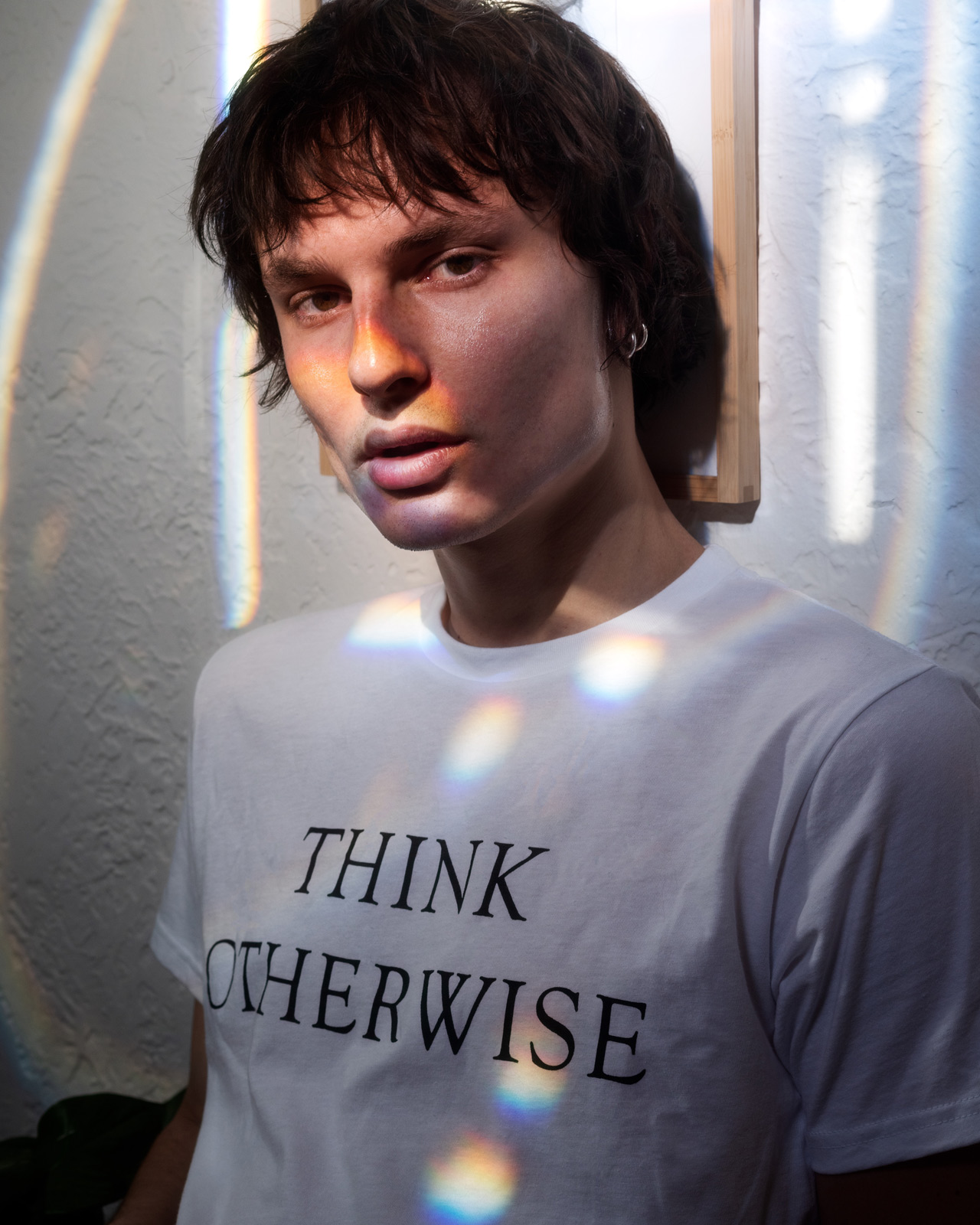 Caroline Reagan: We’re going to start out basic. Have you always wanted to be a fashion designer?

Raffaella Hanley: I definitely fell in love with clothes after watching The Fifth Element when I was twelve. From then on, it was in my head.

Caroline: What about that movie inspired you?

Raffaella: Well, Gaultier did all the costuming, and it was sci-fi. It was just the best.

Caroline: Absolutely. What catalyzed the beginning of Lou Dallas?

Raffaella: Well, I graduated from RISD, and I didn’t want to paint. I knew how to make clothes, so I thought, ‘Why not?’ I started off with a knitting machine and knit a whole collection and showed. I had no idea what was going on—it was great. [Laughs] 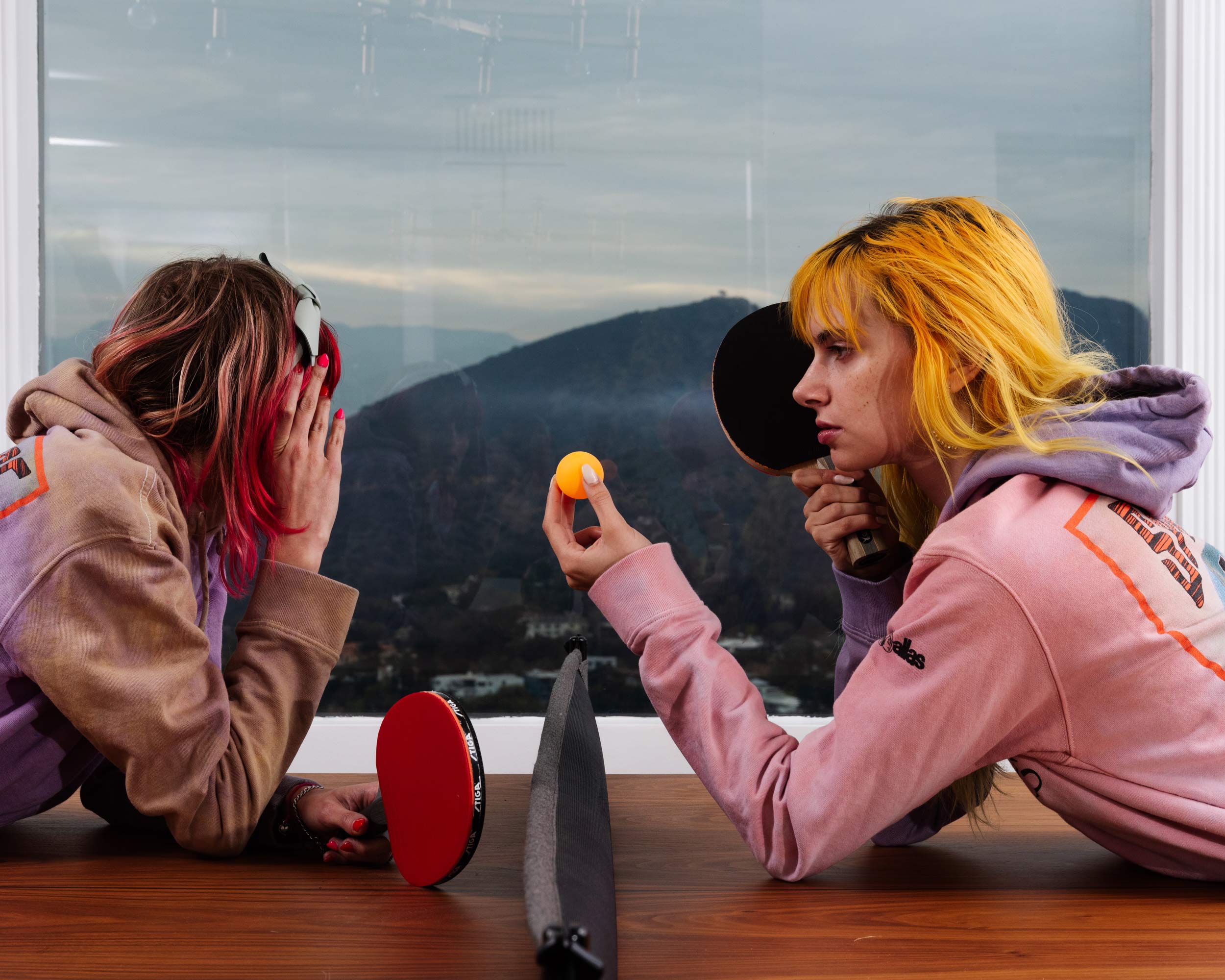 Caroline: How has Lou changed since then? Is it still a one-woman operation?

Raffaella: It still is! I’m definitely focusing on business because it is a business and needs to operate like a business. So, that’s the focus. Now my clothes are produable. I work with factories in the Garment District.

Caroline: When I think of Lou Dallas, I think not just of clothing but of the world you’ve built. How would you describe this world?

Raffaella: I think it’s a bit scrappy and ambitious—or the desire to be ambitious. Hopefully it’s character-driven.

Caroline: I’ve definitely picked up on the existence of these fantastical characters. Tell me about your slogan ‘Think Otherwise.’

Raffaella: That’s really what I’ve been focusing on instead of doing a show this season. At the heart of the brand is doing things your own way and being an individual, going against the grain, the system. So, that’s why I was excited about this photoshoot. There is such a world to Lou Dallas, and I want to be able to bring that to more people. I just want to morph. 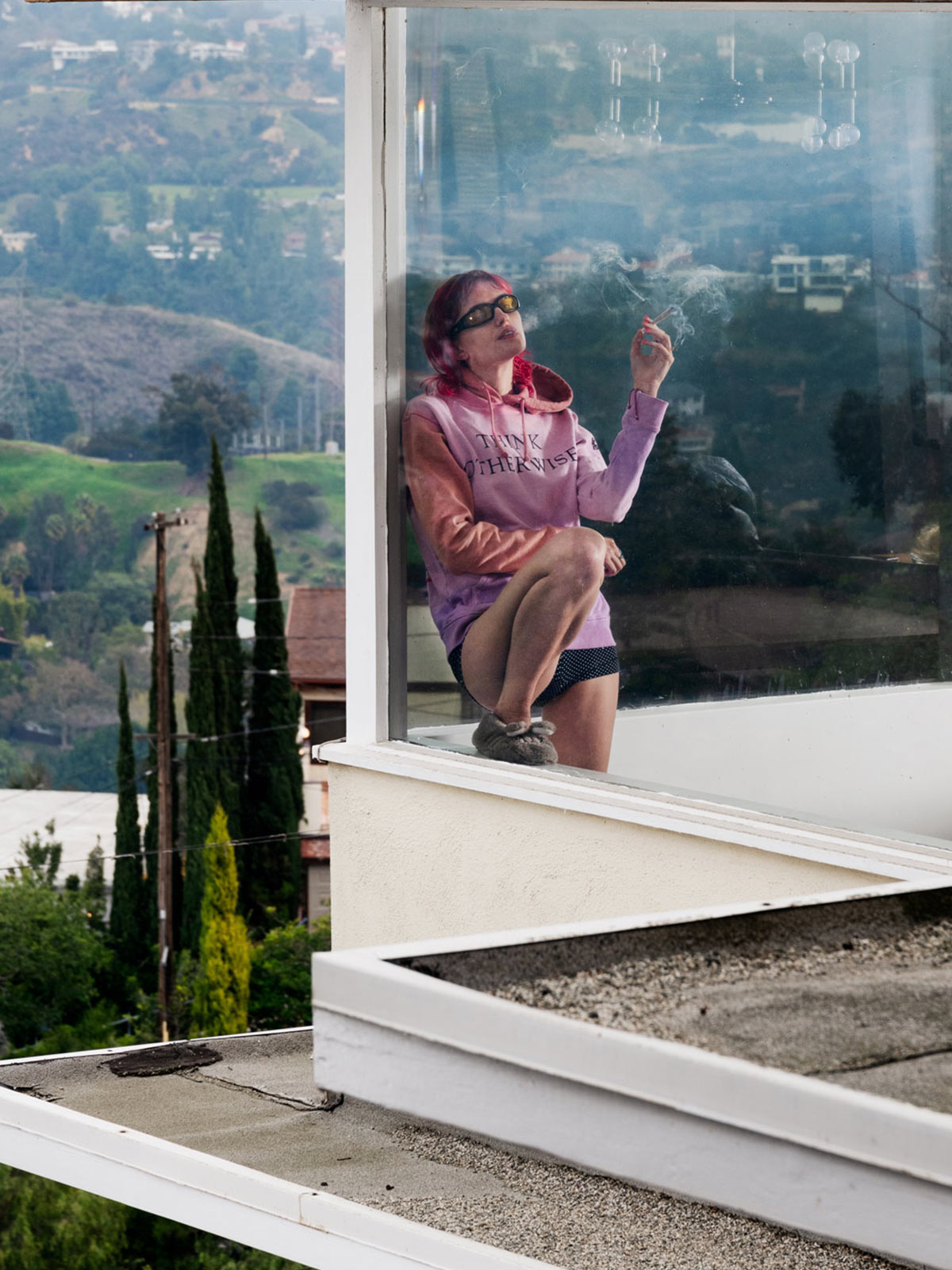 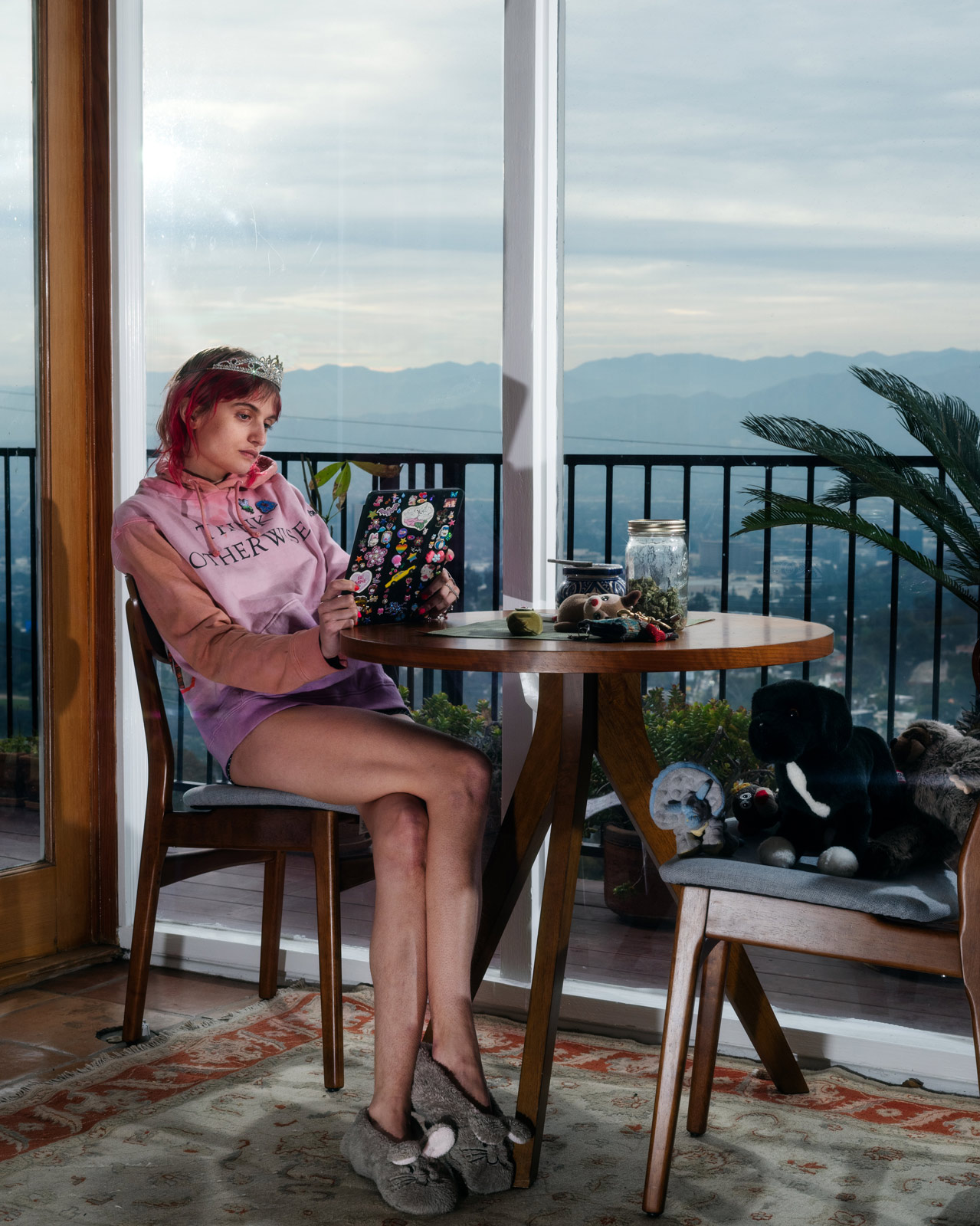 Caroline: Do you have any ideas on how you would like to morph?

Raffaella: Well, I just did a perfume, Claudia. We based it off the character from Interview with a Vampire. It’s a woman trapped in a young girl’s body. We wanted to capture that kind of angsty decay but with sweetness, so we used gardenia. We had Will Sheldon do the script for it, and he drew a character for it.

Caroline: It seems like a darker direction than you’ve gone in the past—though still playful.

Raffaella: I’m not opposed to Lou Dallas having a darker side. I think it could get a little creepier.

Caroline: Tell me about your collaborators. What about them inspires you? I know you’ve worked with tattoo artist Will Sheldon a lot.

Raffaella: On the photoshoot I collaborated with Loren Kramar who art-directed the photos, and he also performed at my last show, singing. Will Sheldon tattoos and he paints and he illustrates. I think it’s exciting when people have all this talent and their talent goes into many channels. 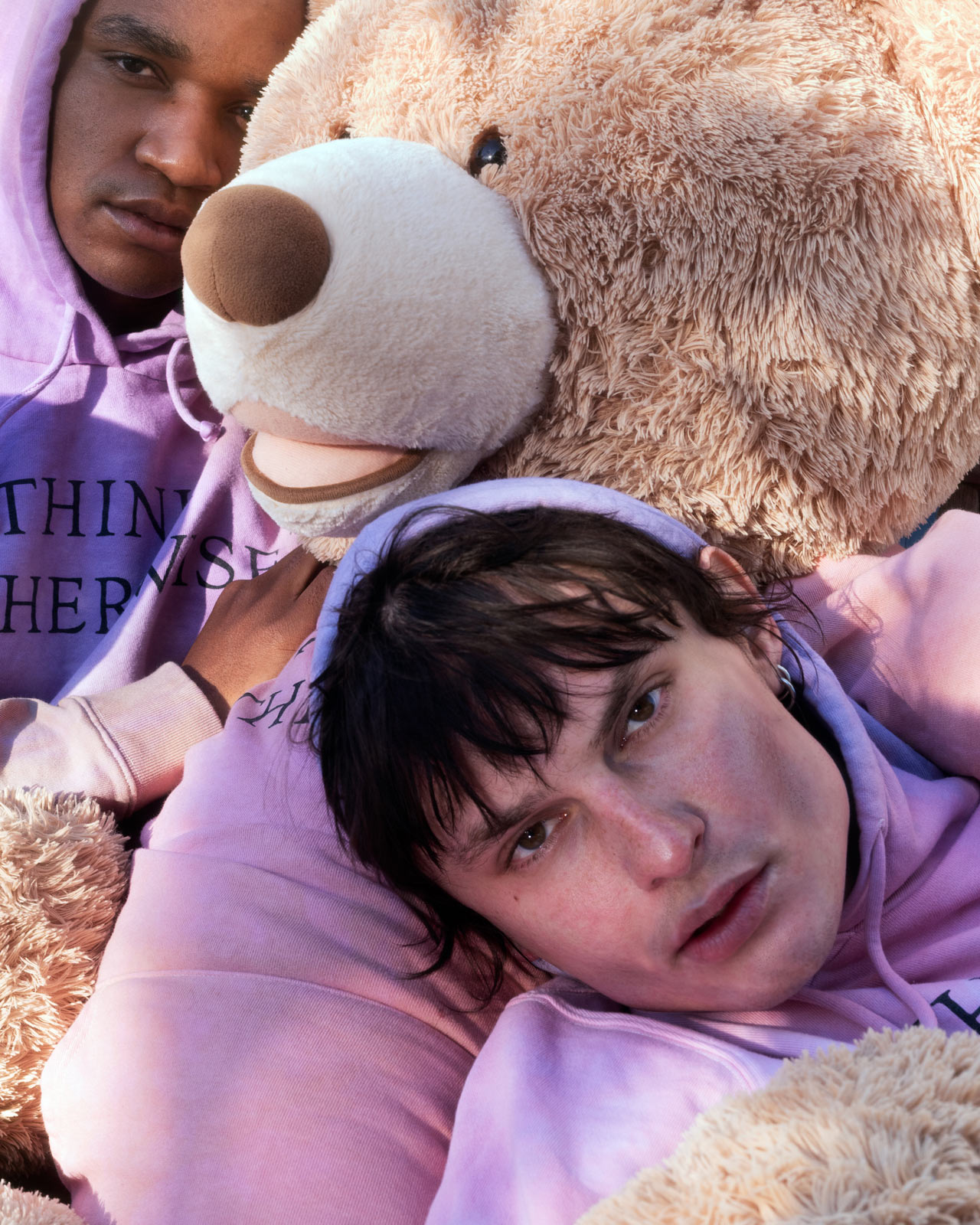 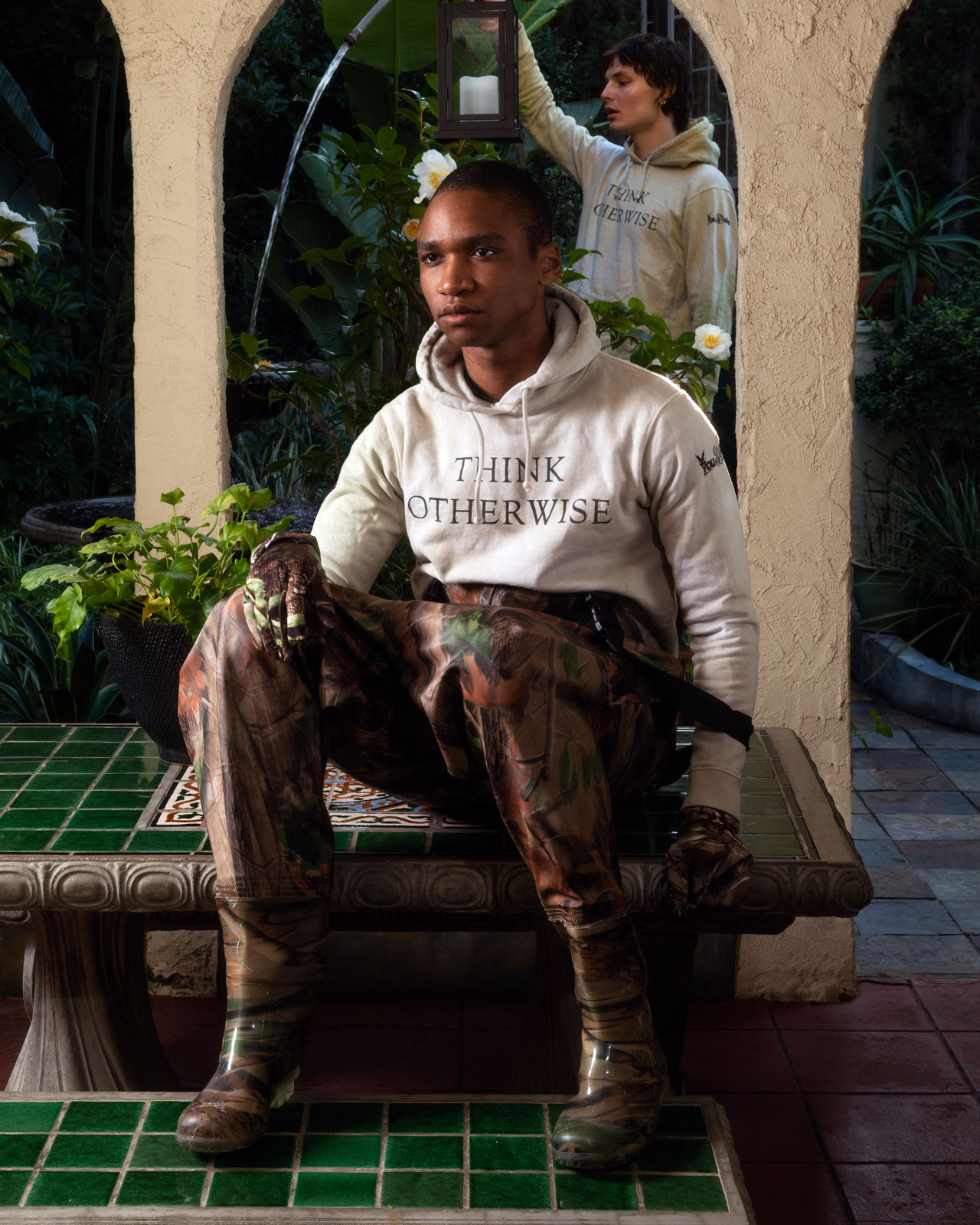 Caroline: How would you describe the narrative of the shoot?

Raffaella: So, we were envisioning Veronika’s character in an Airbnb kind of scenario, and she’s smoking weed. It’s not her home but she’s sneaking around in it. Maybe she pulled a bag out of the person’s closet and was just playing around with the objects in this house that weren’t hers.

Caroline: What do you think is exciting about being in fashion right now?

Raffaella: I think there’s a lot of change that needs to happen. There is something exciting knowing that you can take a different stance than what the big houses are doing and know that they need to change. And hopefully if a smaller brand is doing things in a more ecological way, that will make a difference.

Caroline: What changes in particular do you think are important?

Raffaella: Well, there’s too much clothing being produced. Fast fashion really needs to go down in flames. They can’t exist! They can’t say they’re making ‘eco clothing’ when they’re overproducing. The whole problem is consumption. It doesn’t matter how ‘eco’ they claim their clothing is. The problem is we don’t need millions of clothing produced. 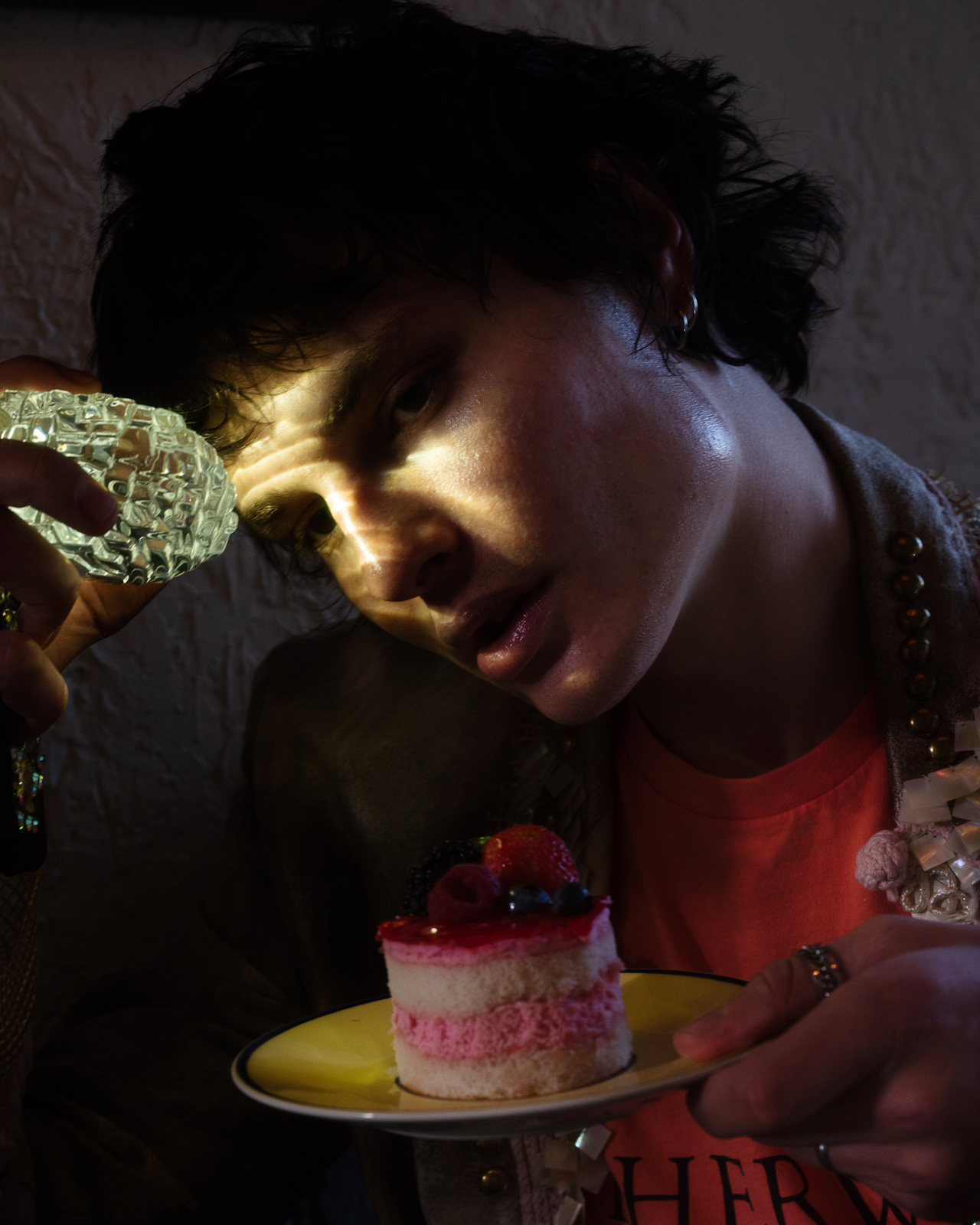 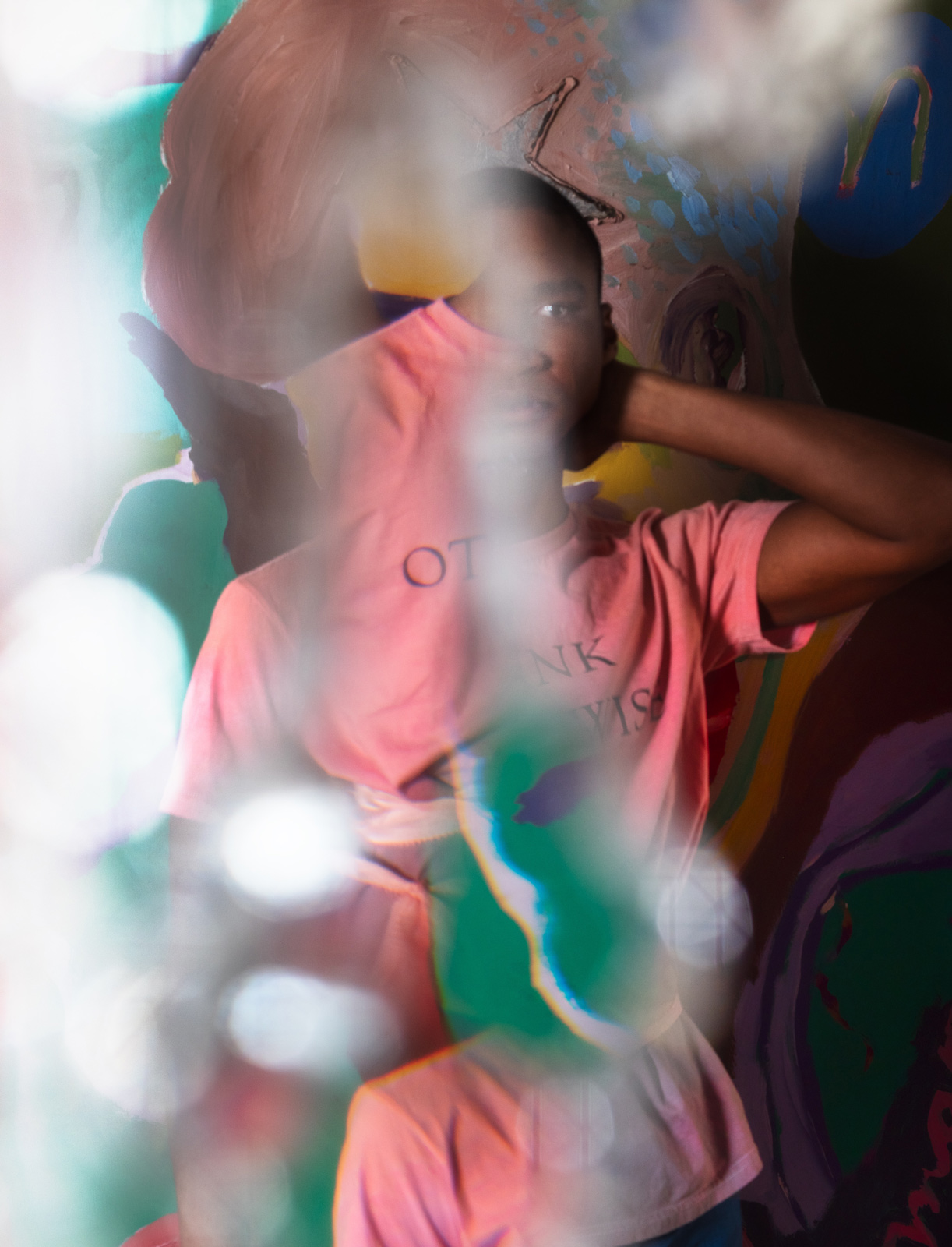 Caroline: And I have a lot of doubts as to just how ‘eco’ their production is. You can slap a label on anything…

Raffaella: They’re lying! Everyone’s lying to you, and it’s scary. And I feel like people are blinded, refusing to read or understand. You have to think even about the fibers that are in clothes. Those fibers are being harvested with pesticides. So, even at that level it’s horrible. And then you move through the supply chain and it’s like, ‘Step two: getting produced in a factory that has no safety standards, and the people working there are in jeopardy.’ It goes on and on and you just realize that nobody is thinking about this. They’re just putting out the clothes. And there’s a whole story and history behind the clothes that’s really fucked up.

Caroline: Where do you source your materials?

Raffaella: I use deadstock and a lot of it comes from an upholstery company. It’s leftover fabrics that the clients don’t take. I’ll buy some fabric from MOOD, but they buy from designers the stock they don’t want anymore. I will go get spandex from Spandex World—or House?—I can’t remember which one it is. Spandex is a disgusting material, but then it’s hard because if a material is sitting there, then obviously it should be used. Everyone should just use the spandex that already exists in the world and then call it a day. The problem with breaking down clothes to be recycled again is that there’s too many weird elements—there’s poly, there’s linen, there’s too much mixture. But they’re working on all this technology. There’s all these cool, regenerative materials that you can fully recycle. 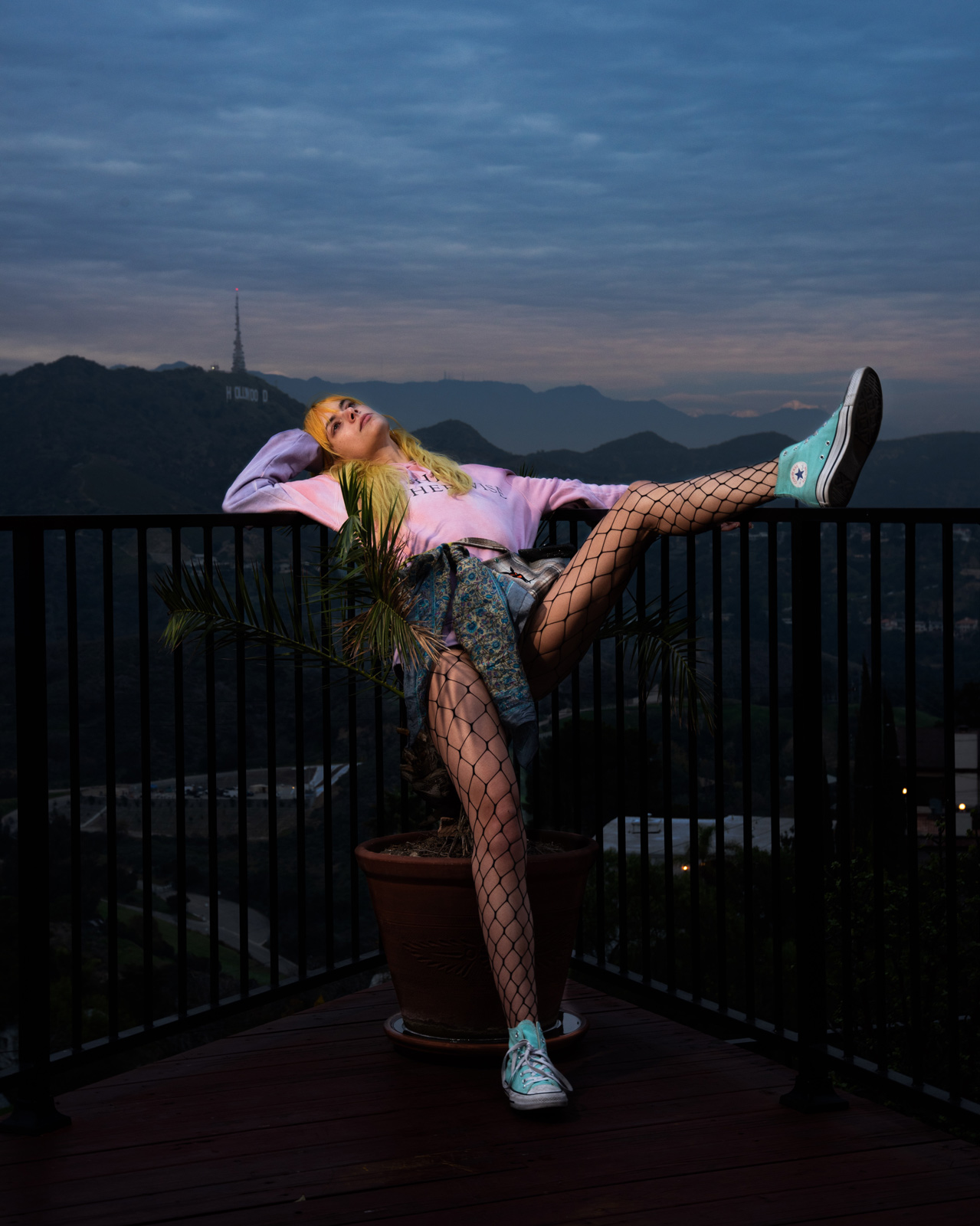 Caroline: Speaking more stylistically, how would you describe the clothing of Lou Dallas?

Raffaella: I like to say they’re accent pieces for the wardrobe you already have. I hope they imbue character. I love fashion. I don’t want it to go away. It’s about figuring out how to create an aesthetic that’s not so wasteful. It’s up to the designers to start being more conscious—or being more creative honestly. They should get fabrics that exist and figure out how to make them into a collection that’s still cohesive. But I hope my clothings brings some kind of elevated feeling to the wearer. Even if it is just a t-shirt, at least it has a political message on it. So, maybe that’s empowering.

Caroline: Right—every piece is special in some way.

Raffaella: There’s so many brands out there who are making really good clothes. How do you compete against that? You better be making something completely different that no one can get anywhere else. Which is why I don’t understand why there are so many brands out there just making copies. I guess everybody wants things fast. They want these fast fixes.

Caroline: In your own wardrobe, do you find that you keep clothing for a long time?

Raffaella: I’m wearing stuff I had in high school. I still have it; I’m still wearing it. It’s crazy.

Caroline: It’s crazy that you are able to make your style from high school work!

Raffaella: [Laughs] It’s not a lot of pieces, but I definitely still have them. I always cared about what I wanted to buy, even in high school. I would never shop at H&M. I would go thrifting and find great things. That’s why I think something like The RealReal is great, and apparently Rent the Runway is taking off, which is a very intriguing idea. I never connected to the culture of knockoffs…why would wearing a knockoff of the real thing be fun? It’s a bad version of it—that seems really uncool honestly.