What the Oscar-nominated filmmaker understands about privilege, capitalism, and artistic compromise.

If each of the sisters in Louisa May Alcott’s Little Women fits into a box, a certain archetype or descriptor that sums up their character, Amy March has historically been ‘the brat.’ Vain, attention-seeking, and conniving, the youngest sister tends to be noted mostly for her desire to marry rich and have nice things, but in Greta Gerwig’s latest film adaptation, it is Amy (Florence Pugh) whose wisdoms on money and gender become the film’s main artery.

When asked by Laurie (Timothée Chalamet) why she privileges wealth over love in a suitor, Amy explains with self-assured precision that as a woman, she has no way to make money to support herself or her family. She says, “Even if I had my own money, which I don’t, it would belong to my husband the minute we were married. If we had children they would belong to him not me. They would be his property. So don’t sit there and tell me that marriage isn’t an economic proposition, because it is. It may not be for you but it most certainly is for me.” Money isn’t just a concern for the March sisters when it comes to marriage, but underwrites each of the sisters’ struggles across the book and film. In fact, when Greta Gerwig begged executives at Sony to let her write the script, she told them that, at its core, Little Women was really all about money.

It’s no surprise that this theme stood out in neon to her—Gerwig’s oeuvre had been quietly building on the question of class and women’s ambition before it was etched so visibly into her Little Women script. In different ways, Lady Bird (her 2017 directorial debut) and Frances Ha (the 2012 indie sensation that she starred in and co-wrote with partner Noah Baumbach) hinge on the protagonist’s upward aspirations and reveal a tension between desiring more privilege and being critical of how those who have it use it. Gerwig’s protagonists tend to be young women who yearn for Big Things—the kinds of things that are accessible, even inevitable, to their peers, but seem to lie just out of their own reach. Who her heroines can be is not merely a question of ‘coming of age’ or of growing into one’s skin, but actually finding the capital and freedom to do so.

Gerwig makes it clear that money is not a trivial thing, but essential to pursuing one’s dreams and creative passions. In Little Women, this is an outgrowth of 19th-century gender politics (and isn’t totally unfamiliar today, either). The film begins and ends with Jo March selling stories to an editor in New York, negotiating her pay, and ascertaining just how much she can surrender to his edits and still live with herself. Jo must write first and foremost to support her family and being a literary iconoclast is not likely to get her there, particularly as a single woman. Jo’s paradox is her desire for independence, which depends upon economic privilege, and the fact that economic privilege is only possible through marriage, and as such, sacrificing her independence. The same was true for author Louisa May Alcott, for whom Jo is something of an avatar, though the Alcotts were much worse off than the gentile poor March family (perhaps a fantasy, or an indication of who readers will and will not give attention to). In the end, when Jo’s editor insists that the heroine of her novel must marry or it will not sell, she quotes her sister—“I suppose marriage has always been an economic proposition, even in fiction”—and gives in.

There is a clear line between Little Women and Lady Bird, one that tethers Christine “Lady Bird” MacPherson, a high school senior who wants to “live through something,” to the effervescent Jo, an imaginative tomboyish writer with a penchant for breaking the rules. Both are erupting with ambition, but their prospects of doing something with it seem dim. Lady Bird’s bid to attend college in New York is backdropped by her father losing his job and her mother working double shifts at the hospital to keep the lights on. Dreams, both films remind us, are also an economic prospect.

The pain of having dreams but nowhere to go with them courses through both girls as they come of age. Lady Bird struggles to understand just how hard her family works for what they have—and by extension, how much of that sacrifice is an act of love. She’s a ball of angst and desire who jokes that she is from “the wrong side of the tracks” and lies to her rich friends about living in a two-story house in a wealthy neighborhood (to which one of them replies, “That’s where our starter house was!”)

But Lady Bird doesn’t crucify its protagonist for wanting more than what she has—instead, it’s a sensitive and poignant portrait of the tension between gratitude and ambition, and learning to live out both at once. Gerwig takes care to show how vexing it is to have ambitions that outsize the opportunities one is given, particularly when one’s peers seem to have things much easier.

This is particularly true for her heroines’ artistic pursuits. In Frances Ha, Gerwig plays a modern dancer who is full of ambition but doesn’t know where to put it, so opts to do very little with it at all, and lives instead in a kind of prolonged adolescent stupor—the kind that her richer male friends can afford to enjoy, but that she can’t, or isn’t supposed to. When Frances moves into an apartment with her friends Lev and Benji (who have rich parents, work odd artistic jobs, and collect Eames chairs), she is surrounded by a kind of romantic leisure that she isn’t used to.

“The only people who can afford to be artists in New York are rich,” her friend Sophie remarks about the boys. Being an artist is not only code for coming from wealth, but also becomes code for a certain kind of high class ennui, wherein Lev and Benji are bankrolled by their parents to spend most days doing nothing. Under the romance of being nonchalant about money too, Frances turns down an office job at her dance company to wait for a performing role, even when she can’t afford to be unemployed. As an audience we’re meant to be frustrated with Frances for not taking the opportunity in front of her, but we also feel sorry for her, seeing how out of place she is in a world of people who’ve had their careers simply handed to them. For a movie about young New Yorkers, Frances Ha is uncomfortably whitewashed—but perhaps it opens a window onto whiteness as a space where entitlement and access are taken for granted. In all of Gerwig’s films, we know every character’s financial situation, something that many filmmakers tend to conveniently gloss over. It feels like an antidote to films about millennial artists who live in sprawling Williamsburg lofts without any indication as to how; Frances Ha says in capital letters that wealth (especially inherited wealth) is often pivotal to pursuing the arts.

Gerwig’s films look the question of money right in the face and show how the flow of the narrative—i.e. the life of the protagonist—is dammed and directed by how much of it they have. These heroines are certainly not altogether devoid of privilege, but Gerwig still points to how class is an architect in each of their lives. Frances, Lady Bird, and Jo are situated in a complicated network of financial volatility that proves critically generative. They can afford to go to college or to live in New York, but just barely, and not with the callous entitlement and blasé attitude of those around them. It is this positioning that registers so strongly, wherein Gerwig’s protagonists are on the outside looking in, fortunate enough to brush up against rich friends or benefactors, but never really to join them; consequently, with the audience positioned outside too, we see just how contingent the conditions of every character are on their economic circumstances—and how ignorant so many of them are to their advantages.

Much of Gerwig’s early work, particularly with Baumbach and Joe Swanberg, was of the indie mumblecore variety, a genre that attracted upper-middle class art house fans who like to pretend that their problems are universal; though Gerwig was one of the faces of this scene, her own projects have tended to make the same privileged millennial artists that she worked with into objects of scrutiny. In Little Women, Amy asks her wealthy neighbor Laurie what he intends to do with his life, to which he titters about writing an opera in which he would also be the central figure. Laurie is not dissimilar to Chalamet’s Kyle in Lady Bird, who “is trying not to participate in the economy” because he “doesn’t like money,” a stance he can only afford to take because of how rich his family is.

Anyone who has spent time in the art world has met this particular breed of entitled cool dude—Gerwig has likely worked with a lot of them, too (and most recently, lost a much deserved Best Director nomination to them). As her films demonstrate, these are the types of young artists who get a leg up and become industry leaders—actors, writers, and directors who saturate storytelling with their own view of the world, where money and class are not inhibiting factors, or even factors at all. By contrast, money is an actor in all of Gerwig’s projects, just as it is in reality, making for smart and complicated musings on everything from marriage to art, and friendship or gender roles. As Virginia Woolf wrote in A Room of One’s Own, “Intellectual freedom depends on material things”—one can say that this is likely true of all freedoms, whether for a modern dancer in New York, a teenager in Sacramento, or a young writer in the 1860s—and Greta Gerwig knows this. 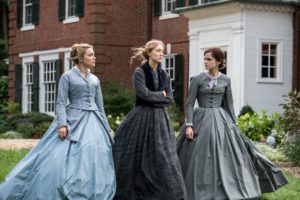