The mentee of Marina Abramović on his debut show and making art in solidarity with his fellow Gen-Z 'apocalypse babes.'

Great art meets you where you are. It is an invitation to delve as deep as you wish into the realm where mind, body, and soul mingle and merge. Its true value lies far beyond its commercial worth; perhaps this is why performance remains one of the most radical manifestations of the form. What is art liberated from commodity but a force of nature all its own?

Installation artist and performance art director Miles Greenberg explores this question in every facet of his work. At the tender age of 22, Greenberg made his New York solo debut in HAEMOTHERAPY (I) at Reena Spaulings Fine Art with a seven-hour performance on December 18. As a snow squall swept the city, Greenberg stood naked on a rock, adorned in white body paint and an 18-carat gold codpiece designed by Chris Habana.

Inside the second-floor gallery, a seductive mixture of dragon’s blood resin and copal perfumed the room, while the low rumblings of bass frequencies erased the tensions of the outside world, welcoming all attendees including Greenberg’s mentor Marina Abramović to contemplate his body as though it were living sculpture. Atop a lush strip of raw meat, flowers, fruit, vegetables, and spice running down the center of the gallery, Greenberg held a lit candle in one hand while balancing a large glass vase on his head like a crown. A water hose ran above him, releasing single drops here and there, while his body involuntarily undulated under the weight of holding the pose as long as it could tolerate. 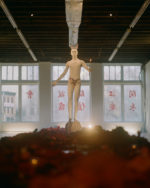 “I look at it as a laboratory,” Greenberg says the following afternoon over tea in his Chinatown loft, which is filled with models, drawings, and notes written in Cyrillic—just one of the many languages the polyglot uses in his discovery for self. “Identity is something I am going to be struggling with for the rest of my life and that’s a given,” says Greenberg, a Black and Slavic French Canadian genderfluid queer man whose self-awareness is a testament to the strength and grace of Generation Z.

“I’ve learned and loved the idea of living in a constant state of in between: that’s what defines my generation right now, especially young people of color and queer people living and thriving in the depths of the unknown,” Greenberg says. “There is no doubt in my mind those are the people who are going to save the world. These Apocalypse babes—I am amazed by us. Giving us agency and allowing us to occupy space, like I did yesterday and intend to continue to do, is vital for our survival.”

For Greenberg, this begins with the body and using it as a channel to meet and master the challenges of living with clinical obsessive-compulsive disorder. “I had a picture in my head. A lot of these figures come from my OCD and anxiety. They tend to be inspired by sleep paralysis demons I have had since I was a child. I am dressing up as my nightmares. They’re not scary or intimidating, they are just there. They are my role models that I learn from. As soon as they become aesthetic, it is more manageable, marketable, and useful. Aha,” he says with a snap. “Now it’s art!” 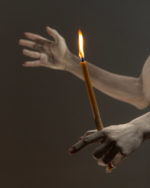 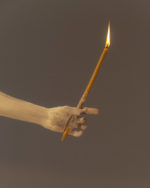 Every Greenberg performance starts from a script, and is performed only once, with no practice whatsoever; it is an act of faith in the self. HAEMOTHERAPY (I) began with an image of carnage, allowing Greenberg to push himself to the edge of catastrophe as possible. “A huge tension, maybe masochistic, was built by having this body precariously perched and if that body were to lose balance and touch these beetroots, paprika, and oil laid out, it will be stained. It’s like drinking a glass of red wine in a white bed, but a more hellish extreme,’ he says. “When you get extreme, you see a lot about who you are because certain things are required: breathing, rest, food, water, homeostasis. There’s no better way to confront that than to hold it as long as possible and see what happens.”

In confronting the essence of survival, Greenberg invites us to respond and reflect, to engage with his being as an object of art itself. Eschewing tradition, the artist dispenses with the idea of performance having a beginning, middle, and end, thereby giving the audience agency to engage with the work on their terms. By wearing blinding contact lenses that allow him to see shapes but not faces, Greenberg established a simple barrier between himself and the audience, allowing them to feel less observed. 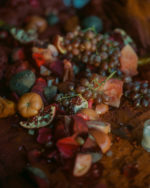 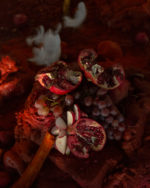 “The biggest offering I can make is to allow people to consume my medium —my body—in some way, on their own time, and with their own faculties,” he says. “The audience can interact exactly as they need to: to stand up here, go back there, take a picture, scream—it can all happen like [they were standing before] a painting.”

Greenberg’s relationship to art began in childhood, traveling the world with his mother. “I was fortunate to have an education in art early on because of my mom’s involvement in the arts. I went to every Venice Biennale that happened within my lifetime including when she was pregnant,” he says. “She had a life in the theater for over a decade. I grew up not in daycare, but on a tour bus with Russian clowns—which explains a lot.”

At the age of 17, Greenberg recognized he wasn’t compatible with academia and took leave of school to embark upon a four-year independent research project that has taken him around the globe, with residencies at École Jacques Lecoq and Palais de Tokyo in Paris, Red Gate Gallery in Beijing, and The Watermill Center in Long Island, New York. Along the way, he began investigating his identity as a queer Black man. 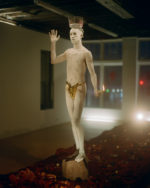 “I grew up around white people, Slavic people, which I am half—but didn’t really have any context for myself physically. I’m here in New York in part to be able to get closer to some sense of my diasporic placement because when I am making art about Blackness, it’s Blackness in a void,” he says. “I had a lot of ideas about what this piece would be about. Haemotherapy: regarding blood, blood relations, squeamishness, being queer, HIV—and I was like, ‘How do I make this Black?’ I realized that every gesture I make is a Black gesture, every experience is a Black experience and a valid one.”

For Greenberg, who recently completed an engagement in Jeremy O. Harris’ new play, Black Exhibition, doing the work is what it’s all about. Looking at the documentation for HAEMOTHERAPY (I) earlier that day, Greenberg realized an element of absurdist glamour he hadn’t consciously planned. “I made a red carpet! And I have got these people flashing photographs on both sides of me, he says with joy. “People think my work is heavy and spooky but it’s not about a dark mood. This is me reflecting what is going on. At the end of the day, art is supposed to be fun.” 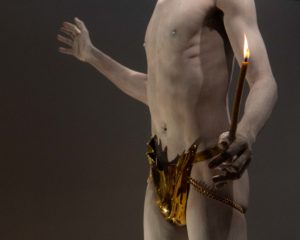 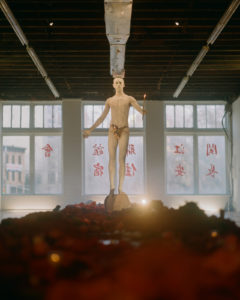 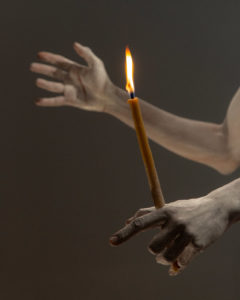 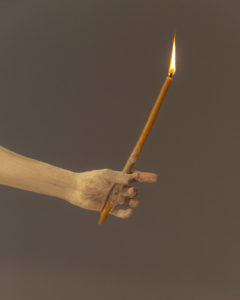 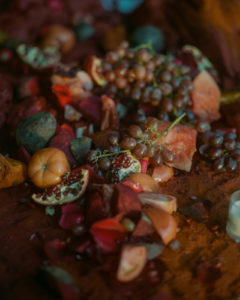 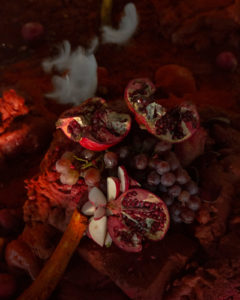 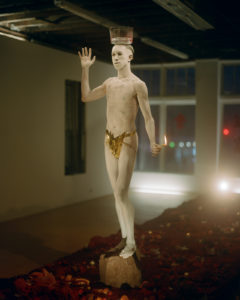 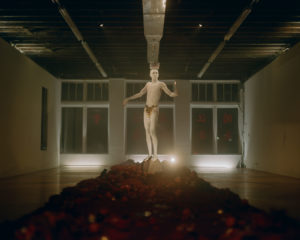