Document visited the artist's Bushwick studio, where Al Qasimi opened up about culture shock, the gendered nature of exorcisms, and why she's done being pigeonholed as an Emirati artist.

Farah Al Qasimi observes commerce with an astute eye, whether it’s pastel-hued chicks at an Emirati bird market—”It’s really I think it’s really sad because they end up dying as a result of the chemicals and the dye” —or the mix of organic goods and electric-colored beverages at New York City’s bodegas. Al Qasimi thinks that there’s a lot to learn from watching consumer habits. Her photographs show so much more, capturing a vibrant sort of beauty from both everyday and staged scenarios. Her photographic and film practice goes back and forth between reportage—The New York Times recently published her images from a road trip meant to document present-day America—to fashion and fine art—she has an exhibition at The Third Line in Dubai through November 23.

The half-Lebanese, half-Emerati photographer was born and raised in Abu Dhabi, before moving to the United States to attend Yale University, where she received both her undergraduate degree and her MFA. In her fine art images, faces are often obscured, and intricate patterns are highlighted. What stands out most is the saturation of color in Al Qasimi’s work; in The New York Times series, a turquoise table provides a bold backdrop for plates of pies and cake, and in her Third Line show, the red of a watermelon pops against the soft white of a woman’s hijab. While her Emirati identity plays a large role in her work—her first feature film tells the story of Jinn, a supernatural creature in Middle Eastern mythology—Al Qasimi doesn’t want to be pigeonholed as someone who only portrays life in the Emirates. Document visited Al Qasimi’s studio in Bushwick, Brooklyn, where the photographer discussed the culture shock she felt when she moved to the United States, her Third Line exhibition, and why you’ll see her photographs across New York City bus shelters this winter.

Ann Binlot—When did you come to the States?

Farah Al Qasimi—I came here for college when I was 17. My mom’s family are Lebanese Americans who immigrated to the East Coast, so I spent summers around them. I’ve always had a relationship to the US, but I grew up in the Emirates.

Ann—Did you have culture shock when you first moved here?

Farah—Yeah, but it was mostly in the form of shock at the fact that people my age had opinions that they felt comfortable expressing.

Farah—Yeah, it’s really weird; I went to Yale and a lot of the people who went there were prep school kids or had gone to really prestigious schools and were expressing their opinions freely in seminars, and I’d sit there thinking, What? I’ve always been told to shut up. I went to a really awful school in Abu Dhabi that basically told everyone to sit down, shut up, memorize, and God help us if we do anything more or less. 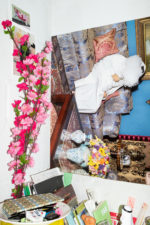 Ann—How did you adjust? Did you feel the need to be outspoken? Were you shy at first?

Farah—I was really shy in classes. I was afraid to express an opinion. I didn’t know we could disagree with our readings. When I first started taking art classes, it was a really big transformation because I felt more able to express the parts of myself that were a little bit more critical, silly and curious. So I started to feel more at home when I was able to do that. And then to meet people who were just as weird and felt as out of place as I did.

Ann—When did you move to the studio?

Farah—Almost a year ago. I just needed somewhere, anywhere, that wasn’t my kitchen.

Ann—How did you find this space?

Farah—The Listings Project. I saw the space and thought it would be a really great interim studio until I could afford something bigger. It has no windows. I’ve actually liked it so much I haven’t wanted to move. I feel like it’s forced me to be inventive about how I use space. It goes through a lot of transformations as a tiny space. Because I’ve been mostly Installing or printing the last couple of months, it’s now in print and draft mode, but before that it was in filming mode. So I had a big green screen up over in the corner, now it’s all scrunched up, and the camera and lights are packed away. 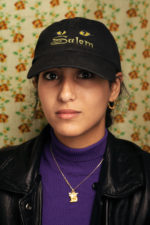 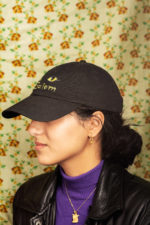 Farah—I have always been classically trained on the piano, and I still write a lot of music. I write all the music for my own films.

Farah—That’s a photograph that I printed out to use as a backdrop for a shoot I did with 10 Magazine. It was a fashion story, a collaboration with Stella Greenspan, who’s a stylist. We did a reinterpretation of the fabulous 80s auntie—you know, the one with an enviable closet who uses power clashing. This is a book I made to compile the research that went into my film Um Al Naar. There were different ways to find information about exorcisms and possessions in the Emirates. You know, exorcisms have recently been outlawed. So I had to have secret meetings with people or deep dive on Instagram, trying to find more information about these things that still happen, even though they’re not talked about. And there’s writing, too, just my broader thoughts and observations on hysteria, possession and gender.

Farah—I discovered a lot of practical advice about what to do if you think you’re possessed. I also discovered, when talking to an exorcist, that I am possessed. He told me that the reason why I was 28 and not married with kids is because I had a jinn possessing me. It was legitimately scary because he started shaking. He was a really charismatic guy, very powerful and commanding, but he started shaking. He said, this project that you’re doing isn’t the reason why you’re here. So I’m kind of looking at these alternative spiritual histories and thinking about how they might relate to ideas of modernity, progress, nation building, and gender as well, because the history of exorcism is very gendered and men and women are affected in different ways. They’re told different stories that are supposed to have specific moral teachings.

Ann—What about the photographs in the exhibition at The Third Line?

Farah—Part of the show is this film called Um Al Naar, which is about a jinn, a ghost character I made up. It’s in the format of a reality TV show, and she is narrating her own vision of how the country has changed since she has occupied it as an ancient specter. She is basically the narrative structure I use to talk about the colonial and imperialist history of the region, which was occupied by Portuguese troops in the 1500s, and then later by British troops until the 1970s. It was technically labeled a British protectorate as opposed to a colony, but obviously the motives have nothing to do with “protection.” It’s a legacy that lingers, especially as the country moves to define itself outside of Western influence. Um Al Naar goes on this journey where she realizes that she’s losing her ancient power, and that nobody believes in her anymore. And then at the end, she decides to do something that will give her her power back and reclaim her position as an important entity in culture and society. And that will also encourage people to get more in touch with their more with their spiritual sides or their hysterical sides.

Ann—What kinds of things draw you to photograph them? There’s a certain type of energy in your imagery.

Farah—I’m out all the time when I’m home. I think that I’m always going places just trying to learn more about what people are buying, what people are doing. You know, I feel like there’s a lot that we can learn about people by understanding shopping and commerce. In the Emirates, malls are such an important public space, as well as shopping centers or souks. Apart from parks, they’re the only accessible public space, in a city that was not built for pedestrian navigation and has to contend with desert heat. You can go to a mall and not spend money. You can just be there and loiter, especially in the summer when it’s so hot outside and you wouldn’t go to a park. When I’m home, a lot of the work is just being outside and paying attention, and also allowing myself to have that same moment of seduction or desire that a shopper might have, but with watching people and enjoying space.

Ann—How do the Emirates play a role in your work?

Farah—I’m interested in it both as an insider and an outsider. I think as a nation-building project, it presents a lot of really interesting questions about identity and belonging, and it’s been interesting to watch it craft a sense of autonomy after coming out from under the shadow of British imperialism. It’s a place that’s got a lot of eyes on it right now.

Ann—What are some of the misconceptions that you hear?

Ann—How does your own identity being an insider and an outsider?

Farah—I’m an insider because I have an Emirati passport. I’m an outsider because I’m only half Emirati, and I have family here in the US. I’m also a woman, you know, and that has its own indignities both here and there. Practically, there are certain spaces that I can never enter like mosques or social clubs, card games, hangouts—there are social worlds that are not accessible to me. So yeah, I think everybody’s identity informs their work in different ways. Identity is of course complicated. And I think it’s really impossible to silo different things off from each other like gender, sexuality, ethnicity. etc. So I try not to think about it in a prescriptive way.

Ann—We’re in an interesting time right now, because identity politics plays such a large role in art at the moment.

Farah—I get really frustrated with American identity politics as somebody who did not grow up here. I think that I’m constantly being asked to talk about identity in a way that’s not interesting to me. I fell into a trap. When I first got here, I felt like I had to make work that was Arab, or about being Arab. And I think that I’ve since moved away from that and become a lot more interested in things that are informed by my identity, but not about it.

Ann—What are you working on right now?

Farah—I just finished a film about the perfume factories of Sharjah for the Sharjah Art Foundation that I’m really excited about. I developed two scents made by combining a perfume company’s most popular scents for men and women. I have a project with a Public Art Fund where I’m producing a new body of photographs that will be on bus shelters. 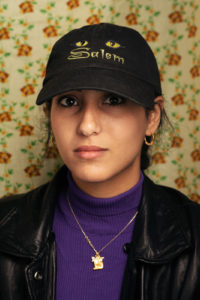 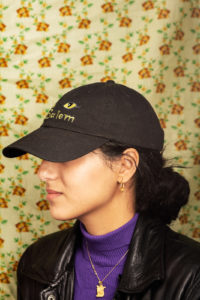 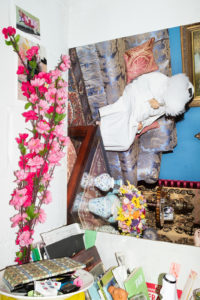 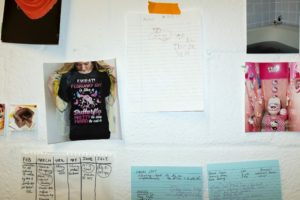 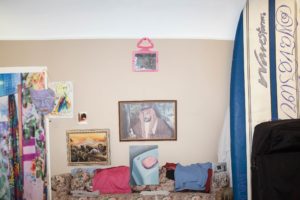 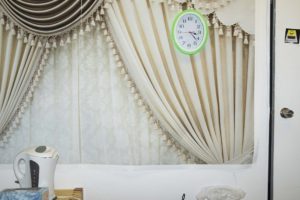 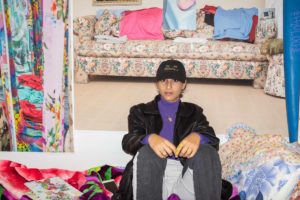