German painter, sculptor, designer, choreographer, and Bauhaus teacher Oskar Schlemmer looked at the human body as though it were an architectural form, rife with possibility. Performers in Schlemmer’s pieces looked as though they were moving parts in a surrealist or abstract work. His most famous piece, the Triadisches Ballet (Triadic Ballet), made its debut in Stuttgart in September 1922. Dancers were costumed in geometric formations, appearing as if they were sculptures spinning about minimal sets composed of grids, swirls, and shapes. Schlemmer’s theatrical presentations were like kinetic works of art, the dancers acting as moving components within a set that was also a work of art in itself. Schlemmer’s vision was seen as too avant-garde for the time, even for a school that took pride in innovation.

Schlemmer’s legacy is receiving renewed attention a century later thanks to the 100th anniversary of the Bauhaus. For Frieze London last October, Galerie Thaddaeus Ropac and Bühnen Archiv Oskar Schlemmer worked together to perform a new iteration of his Bauhaustänze (Bauhaus Dances), created between 1925 to 1929 in his Stage Workshop at the Bauhaus. Last week, Schlemmer’s oeuvre was the source of inspiration for the gala celebrating the performance art biennial Performa at SIR Stage37 in New York.

All images courtesy of BFA.

“The Bauhaus was the first art and architecture school to feature a performance department as part of its curriculum,” said Performa founder and director RoseLee Goldberg. “It is fitting that we celebrate the legacy of Oskar Schlemmer, who insisted on play, and ‘the stage’ as a critical education tool and as the catalyst for creativity.”

The gala dinner was an experimental performance imbued with the spirit of the Bauhaus. Tables were divided like the seven workshops of the Bauhaus as guests were encouraged to exercise their own creativity through drawing exercises and painting on their plates with food-based paint. There were movement instructions by Morgan Bassichis as well as a giant interactive loom by Textile Arts Center that paid homage to the school’s Weaving Workshop. Yale dance scholar and choreographer Emily Coates and costume designers Reid & Harriet collaborated on a series of performances that paid tribute to Schlemmer throughout the evening. Dancers in primary-colored uniforms hid behind white panels that they moved about the stage, before they emerged to form a synchronized dance performance.

“Schlemmer talks endlessly about the relationship between disciplines, working across disciplines. He is an extraordinary model for us at Performa, because this is one of the essential ideas that drive our conversations,” said Goldberg, who wore a Schlemmer-inspired dress designed by threeASFOUR. “Walter Gropius talked about the need to build a community of artists of all disciplines united in constructing a new and better world, and that is why everyone is here in this room tonight.” 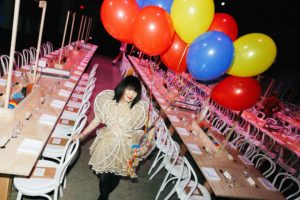 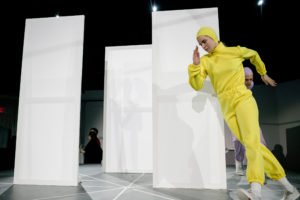 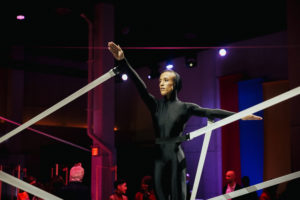