The artist spoke to Document about how she balances 8-hour sets, co-owning a label, and raving with her grandma ahead of the New York Time Warp event.

In just a few years, Amelie Lens has become one of the world’s most in-demand techno DJs, and she shows no sign of slowing. Ahead of Time Warp’s 2019 New York City edition, she tells Document why it’s all about friendship, fans, and family.

Amelie Lens is one of the most phenomenal techno DJs and producers to have emerged in the past decade. She’s also one of the nicest. Somewhere between releasing her debut EP in 2016, launching a club night named for its tour de force titular track “Exhale,” founding her own label imprint Lenske, and sending thousands of sweaty fans into other dimensions with her relentless live sets, the Belgian wunderkind always makes time for the fans. Scroll through the effusive comments on her Instagram and you’ll find many are from Amelie herself; maybe sent from an altitude of 36,000-feet, en route to pilot another all-night techno odyssey at London’s Fabric or Hasselt’s Labyrinth Club. For Amelie, sending emoji-studded messages to fans isn’t a conscious attempt to dispersing the aura of mystery that has traditionally surrounded techno artists. Rather, it’s a natural extension of what she does during a set—and a reminder that, despite her prolific discography, she’s only 29 years old.

“I’m still a relatively young artist so I am not really sure how different it was back in the days,” Amelie says. “For me, it has always been important to feel a connection to the crowd, by talking to them online before and after my gigs, [and] to feel connected during my set. I’m really focused on the crowd during all of my sets.” After all, Amelie was a fan first, spending her teen years traveling solo to festivals like Belgium’s Dour Festival and Barcelona’s Sonar, where she saw Maya Jane Coles play at the age of 16, before buying her own equipment. This weekend (November 22-23) Amelie will play the 25th anniversary of Time Warp when the legendary techno festival comes to NYC—along with Richie Hawtin, Pan-Pot, Nina Kraviz, Joseph Capriati, Sven Vath, and Sonja Mooner, to name a few—after being inducted into the Time Warp family earlier this year with a mind-blowing set in its hometown of Manheim. Ahead of the show, Document talked to Amelie about staying grounded while blowing up, building her own family with the Lenske label, and what her most loyal fan—her 82-year-old grandma—taught her about DJ etiquette.

Hannah Ongley—How do you see your role in the music industry evolving as co-owner of the Lenske record label? Is there a shift in power dynamics from DJ to label owner? Does this allow you to experiment more as an artist? What are you looking for in terms of emerging talent and tracks to support?

Amelie Lens—We are trying to build a family with Lenske; this is really important to me. We don’t want Lenske to just be one of the labels in which artists can sign their music. We are five artists right now; we play together often so there is a special friendship growing, which I think is amazing. I take our role in this seriously because we are the new generation, and this comes with a big responsibility for the future of our scene. It’s a long process from hearing a track for the first time until releasing it on the label. There are some tracks that I’ve been playing for months before I decided to release them on Lenske. It can take up to a year to work towards an EP, to get the right tracks together and test them.

Hannah—You recently played a special eight-hour set for 4,000 people in your hometown! Describe what is going through your mind during these extended sets. What are you thinking and feeling?

Amelie—This was a very emotional night for me! Antwerp is a small town, so when my agent asked me if I’d be up to do this all-nighter I was not sure and felt nervous. But as soon as we announced people got so excited, and it sold out fast. When I arrived at the venue I could not believe how big it was; the production looked insane, kind of like a festival. I usually do my allnighters at more intimate venues like Rex in Paris, Shelter in Amsterdam or Fabric in London, so this was completely new for me too. But it went by so fast; the first two hours felt a bit uncomfortable because I had to build up my set, and it just feels weird to play so deep and slow for such a big crowd and having to hold back. But after two hours I started playing my regular stuff, and I was having so much fun. The crowd was full of energy! I felt like I was in this flow of constantly mixing without watching the time and suddenly it was almost 6am and I had to stop. The venue was still totally packed, and it was somehow heartbreaking to have to stop. I might be up for a 10-hour set next year!

Hannah—What does your day look like after an all-night set like that? What time do you wake up? How do you prepare for doing it all over again? Do you ever bring a snack into the DJ booth?

Amelie—The day of my all-nighter I tried to sleep as long as possible. After my set I had to go to the airport. I slept at the airport hotel because I had an early flight to Scotland the next day where I played at a festival at noon. I had coffee during my set; after that I ran to the airport again to catch my flight to Barcelona where I played at night. For sure next year I won’t agree to play two gigs after an all-nighter. It’s really intense to play for so long, especially because I give so much of myself during my sets; I’m constantly focussed and mixing. My agent and my tour manager actually remind me to drink water during my sets, because I’m always too busy. Would be great to have a calmer weekend when I play all night next year, maybe even don’t do any other gigs besides this one.

Hannah—You started off going to raves alone when you were younger. Where is the best venue or party night in Antwerp for a solo traveler to go clubbing alone?

Amelie—That’s hard to answer for me since I have not been going out in the last five years; I’ve been making music and touring non-stop. When Farrago (from Lenske) was playing at Ampere I went dancing in the crowd by myself. That was lots of fun!

Hannah—Silence can be as important as noise in techno. Where you go to find moments of tranquility or inspiration in Antwerp?

Amelie—Home! My home is everything to me. It’s where I have my studio and my cats! I just moved from a house to a small apartment which is completely renovated and made exactly how I wanted it to be. I’m trying to live minimally, I only have the things that I need, there is nothing on the walls, it’s very calm, clean, and not too big.

Hannah—Can you share a photo from an early clubbing experience that was life-altering for you?

Amelie—There were not so many pictures taken back then, also phones did not have good cameras, so we barely made pictures at night. I certainly never made any pictures myself.

Hannah—What is your favorite record store in your hometown?

Amelie—To be honest, I always buy my records online because it’s less time consuming and easier. But we have a great record store called Wally’s Groove World; I believe it’s more house-oriented though.

Hannah—I am obsessed with this video of your Grandma raving alongside you at Pukkelpop. How does she rate your skills? Does she have a favorite track of yours?

Amelie— I’m obsessed with it too! I moved [in with] her when I was 11 and she raised me as her daughter so she means the world to me. She does not really understand my music so well; to her my tracks all sound the same so she has no favorite one. She never traveled a lot, so I got her a tablet so she can see my travels and see where I am and what I’m doing. She’s now super active on Instagram and always checking my videos and Instagram stories. She finds my music a bit repetitive but sometimes she calls me to say that I played ‘a beautiful track full of melodies.’ She is very involved in everything that I do, she likes to share her opinion and advice. If I would listen to her I would wear very colorful dresses with flowers or glitter and have a microphone during my set because she says it’s rude that I don’t even say hello or thanks to the crowd after my sets.

Hannah—What can we expect from your set at Time Warp in NYC? Are there any artists you are particularly excited to be on the lineup with?

Amelie—Time Warp is one of the best events in the world so I’m always looking forward to play for them. Lineups are great, production is always on point. I’m happy to play alongside many friends like Pan-Pot, Richie Hawtin, and Joseph Capriati! 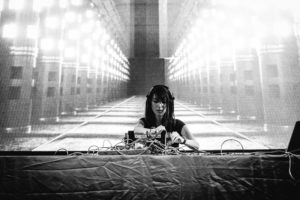 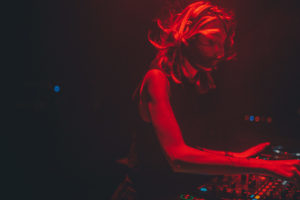 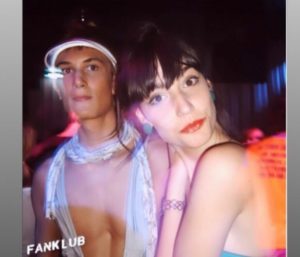 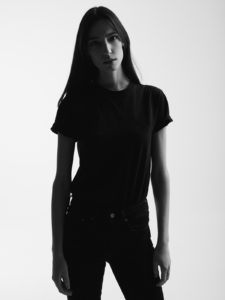 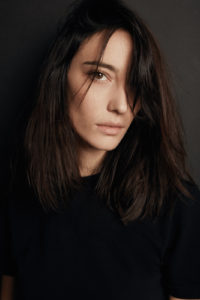