‘The Golden Girls of punk’: 43 years after taking up instruments against the patriarchy, Backstage Pass releases their first album.

They say time flies when you are having fun, and for the women of Backstage Pass that couldn’t be more true. Founded in 1976, the mostly-all female band was one of Los Angeles’s first punk acts, and their origin story is the stuff of legend. After seeing the Runaways debut at the Whisky a Go Go on the Sunset Strip, Teen magazine writer Marina Muhlfriedel was disgusted by the soft-porn male fantasy that manager Kim Fowley overlaid on the girl band fronted by Joan Jett.

Muhlfriedel hightailed it to the Rainbow Bar & Grill, gathered up her girlfriends, and announced, “We can do better!” As fate would have it, Rodney Bingenheimer, DJ for KROQ-FM known for breaking new acts, was just passing by their table. Muhlfriedel grabbed him and said, “Hey Rodney. I’m in a new girl band.” He asked the name and Muhlfriedel made it up on the spot. The following week, Bingenheimer was spreading word of the coolest new band, Backstage Pass—even though they had not so much as rehearsed yet.

Backstage Pass quickly got down to brass tacks, scoring practice space at the famed Cherokee Studios where luminaries like Alice Cooper and David Bowie would watch them rehearse through a one-way mirror. But they needed a more substantial, deeper connection in the scene, and a chance encounter sent them to meet with Brendan Mullen, owner of the Masque, which would quickly become the center of the punk scene in Hollywood.

During their brief career, Backstage Pass would perform alongside acts like Devo, Elvis Costello, the Nuns, the Mumps, and the Screamers, enjoying the thrill of it all. Now, 40 years after disbanding in 1979, they have just released their very first album: Backstage Pass 77 (Semi-Pro Records). In an exclusive interview with Document Journal, Muhlfriedel (Marina Del Rey), Genny Schorr (GennyBody), and Joanna “Spock” Dean speak about how they have become the Golden Girls of Punk. 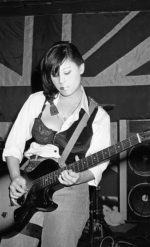 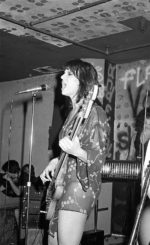 Genny Schorr—I was a real runaway [laughs]. I came from the Valley and ran away to Hollywood when my mother died. I went to see Dr. Feelgood at the Starwood, and they had an after party at the Continental Hyatt House. I met the girls there that night.

Joanna “Spock” Dean—Marina asked if I wanted to join the band and I said, ‘What would I do?’ She said, ‘You can be the bass player.’ I said, ‘I’ll do it if I can learn to play bass,’ and I did.

Genny—I was extremely struck by meeting Jake Riviera [founder of Stiff Records and Elvis Costello’s manager] and having never experienced that punk energy before. I was playing guitar in the Valley. People thought, ‘Oh girl playing electric guitar—no!’ And I was like, ‘Yes!’ They didn’t want to teach me but I was going to learn it anyway.

Joanna—I had no formal musical training. All this music we listened to non-stop that was our training. We taught ourselves and did what we felt. I co-wrote and co-sang a lot of songs with Genny. We were of the moment. That’s how we wrote.

Genny—I was 18, and boys were on my mind. We had a front-row seat to all rock stars, and I took advantage of it. We wrote songs about Dave Vanian (The Damned), a song about Clive Langer (Deaf School), Paul Gray (Eddie and the Hot Rods). I would live for bands to come to town. It was before AIDS, and we had a lot of fun.

Joanna—We knew Elvis Costello was coming to the Whisky, so I called up Jake and said, ‘We want to open for Elvis.’ He said, ‘Are you ready?’ I said, ‘Yes!’ They already had another opening band booked, but they gave us a chance. Jake had just gotten Elvis signed to Columbia Records, where I happened to be a secretary at the time. It was a showcase, to the place was packed with industry people. It was a little different than when we went to San Francisco and played in front of people we had never met.

Marina—We took to it naturally for a bunch of people who never played live before. Maybe it was from having been on the scene, hanging out with other bands, standing in the wings, or being backstage, I felt like we already knew how to do it before we actually played. We were comfortable and stepped into our own power. We thrived on the energy.

Genny—In the early days, we inspired other women to pick up instruments and run with it—people like the Go-Go’s who became even more successful.

Genny—It definitely wasn’t slick. I don’t think we knew what we were doing but we did it anyway.

Joanna—We never thought, ‘Oh we are going to form a band, get signed, and go on tour.’ It was like, ‘We’re going to live for the day and have fun.’

Genny—Even now when we play, the audience loves it. We got offered a reunion show at the Bootleg called ‘Radio Free Hollywood’ We made it short and sweet, and we pulled it off. In January, we’re playing a punk rock bowling league.

Marina—We are the Golden Girls of Punk. Being out there and doing this at our age is truly the most punk thing we have ever done. These old ladies are kicking ass! 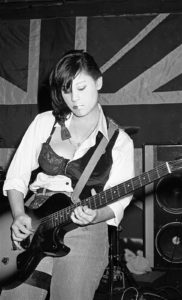 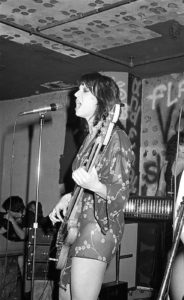 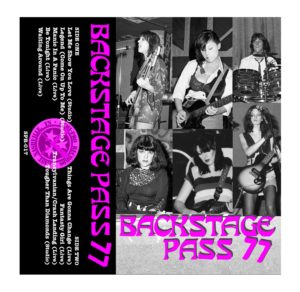 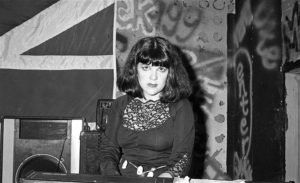 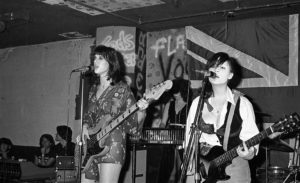