The National Youth Poet Laureate discussed corporate sustainability with representatives from the United Nations, MIT, and more at Prada’s Shaping a Future conference

One of the youngest and most dynamic speakers of the symposium was the Los Angeles born-and-bred 21-year-old poet and activist Amanda Gorman. Gorman made history when she was named the first National Youth Poet Laureate in 2017, joining the ranks of Robert Frost, Rita Dove, and Maxine Kumin. The Harvard sociology major, who is in her senior year, has already recited her poetry for the Obamas, Lin-Manuel Miranda, Hillary Clinton, and Malala Yousafzai. Viking recently signed Gorman on for a two-book deal after a bidding war between eight publishers.

Gorman treated the audience to one of her poems at the insistence of Riotta before she spoke about freedom, inclusivity, and consumer choice. She began by explaining her connection to Prada through their Re-Nylon project, Prada’s upcycling initiative that involves repurposing discarded materials such as fishing line. Gorman traveled to Slovenia to visit the production plant of textile yarn producer Aquafil, which produces the fibers used in the Re-Nylon line. “When I went there, the most striking thing that I realized when I was trying to understand the science behind this phenomenal project, is that envisioning a sustainable world requires such amalgamous imagination, it requires the courage to take up circular systems that have never been tried before and had never been developed before.”

While this trip to Slovenia helped her envision how companies can adopt innovations to promote sustainability, it also helped clarify her role as an individual. “We all have a claim in the stake in fighting for the world that we believe in. And I think each of us brings our own talent to that,” she commented. “So for example, when I looked at Prada I was like, My job is not to be the smartest person in the room, because that science is very complex. My job is not necessarily to invent these types of systems, which I’m only beginning to understand. My job, that I try to personally bring to the world, is to use my words to have an impact on the future I believe we all deserve.”

As the lone representative of Gen Z on the panel, she spoke for her generation when asked what they are fighting for. “Freedom is not necessarily just the economic freedom of what I’m going to purchase,” she clarified. “When young people talk about the liberation of the world, which is completely revolutionary, it’s not just, I want freedom for myself, it’s I want the freedom for my neighbor. I want freedom for people who look different from me or who speak a different culture…“To break from the chains of the past is what’s going to make the most transformative change.” 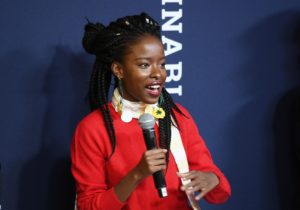