“It was the idea of returning to the basics, the fundamentals, to be ‘naked’ in the way that we should start from square one,” explains Satoshi Kondo via translator, in the bustling Issey Miyake Paris showroom a few days after his first presentation for the Japanese fashion house. After a 13-year tenure in the design rooms of Pleats Please Issey Miyake and Homme Plissé Issey Miyake, Kondo was announced design director in September, just a few weeks shy of Paris Fashion Week, in a changing of the guards. (Former womenswear head designer Yoshiyuki Miyamae will stay at the house to focus on new projects.)

Held in Paris’s Le Centquatre, a sprawling, light-filled warehouse hub for cultural and artistic activity in the city’s 19th arrondissement, the presentation was a dynamic kinesis of acrobatic ballerinas, skateboarding models, bopping and bouncing dancers, and parachute gowns that descended from the ceiling directly onto the body, all set to the live sound creations of French artist DeLaurentis. That his presentation was centred around movement makes sense for Kondo’s designs, observed in their fullest with air and bodies moving within them.

In keeping with the design philosophy that Issey Miyake himself practiced for the better part of a half-century, Kondo designs clothes that speak to ma, a Japanese term that describes the space between two entities, in this case, body and garment. “In the first series of the collection, Draw and Connect, there’s always the relationship of our bodies with the clothes. I started with the idea of our bodies facing a piece of fabric and the dialogue between the cloth and the body,” says Kondo. “Mr. Miyake always starts his designs with a square piece of cloth, which uses clean, minimal cutting, sewing, and waste—that concept has never changed. So this is the idea of our body being naked but we cover ourselves with a square piece of cloth, to feel the warmth. And then from here, people start feeling joy and start moving.”

The materials in the Draw and Connect story are washi, a UNESCO-protected Japanese paper craft, a basic calico-like cloth. Printed on this cloth is a hand-painted print in skin and earth tones, the pattern primitive, the gestures of the brush strokes instinctive, an abstract of two people in embrace, “Something that is happening in conversation,” says Kondo.

In the remaining series, Overlap and Dye, Swing and Extend, and Move and Bounce, the garments evolve through the addition of sashiko, a method of embroidery dating back to the Edo period [1615 to 1868], and itajime, where the fabric is hand-pleated and clamped between two boards before being submerged into dye, creating an organic tie-dye-like pattern. Through Swing and Extend, oversized woven nylon cagoules blew up like parachutes were worn by skateboarding models and in Move and Bounce, horizontally striped dresses were cut, assembled, and then pleated to create maximum springiness against the wearer as she jumped around.

For his first collection, Kondo described wanting to fully embrace the spirit of the house, despite being given full autonomy from Miyake, who has stepped back from designing but still oversees the company. “We talk almost everyday,” explains Kondo. “But the conversation has always been something about an attitude or an approach; Thinking about making something new that is innovative, that moves people, that touches people. It’s more the sensibility, the mindset.” Sometimes, however, the discussion is simply friendly, perhaps about the Rugby World Cup recently held in Japan, or a specific brand of apple that Mr. Miyake would like to recommend to Kondo.

Looking ahead, Kondo intends to continue to honor the house DNA while imbuing collections with the same grin-inducing capabilities as of his presentation. “Our brand has a long history of, well—the original concept of Mr. Miyake’s piece of cloth, as well as incorporating traditional Japanese techniques in a modern way, so this is something I will always try to keep in mind. We are also always trying to engage with the idea of monotsukuri, the process of creation. So there’s always this focus and commitment to really using a piece of fabric to its full potential. It might sound grand but it will always be a part of the house’s philosophy,” says Kondo. “What I would like to bring is a sense of humor, I always want to make people happy. I hope that when people wear the clothes, they genuinely feel joy.” 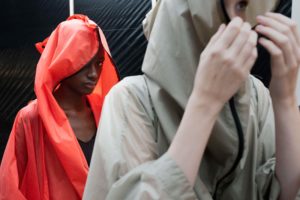 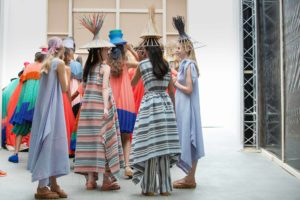