A glimpse into Scandinavian fashion's subversive future in Oslo, where street-level concerts, and even a ‘sustainable art rave’ mark the cultural shift away from the traditional closed-door model.

Increasingly, if you’re not in Milan or Paris, the very concept of a runway show feels outdated. At least it’s probably not the greatest idea. It’s all about presentations in Chinatown restaurants, sweaty mosh-pits in Irving Plaza, or screening parties in Bushwick, where Telfar’s VIPs ate White Castle burgers and watched a short film scripted by Jeremy O. Harris. The new guard of designers often operates more like an art collective—and the women behind a buzzy new fashion venture in Oslo are taking note. Two weeks ago in the Norwegian capital mostly known for midnight sun and oil money, the inaugural edition of Fushion festival was launched by Hilde Pettersen Reljin (CEO, Collective Oslo Fashion Art Festival) and Ditte Kristensen (CEO, Oslo Runway). From August 28-30, Norwegian fashion designers collaborated with local and international artists to hold presentations, street-level concerts, and even a ‘sustainable art rave,’ marking a cultural shift away from the traditional closed-door model.

“For the younger generation, they live through their phone. Everything is mixed,” said Hilde, who spent 18 years in New York working for art world behemoths like Gagosian and Jeffrey Deitch. “You don’t just follow fashion, you don’t just follow art, it’s everything that you gain inspiration from,” Ditte added. On the last night before the shows, we were all sitting in a roomy booth in Youngs, a spacious pizza restaurant that had been converted into the festival’s main hub, as crates of champagne glasses were being hauled in for the following night’s Epson Award party. The award would end up going to Michael Olestad, the ex-Acne Studios designer whose three-year-old namesake label offers a conceptual, subversive spin on Scandinavian femininity. (In Youngs’s basement two days later, Olestad’s new campaign photos by Jakob Landvik were installed by a moody procession of models in sunglasses and business suits.) Hilde and Ditte had somehow convinced the restaurant to sanction a basement rave by an artist known as KlimaKunst, who had Oslo’s top DJs spinning until 3am. “It’s basically rave parties with art,” Hilde explained. “All their art is sustainable. [KlimaKunst creator Truls Berg-Hansen] didn’t even want to print on our paper because we use Epson.” 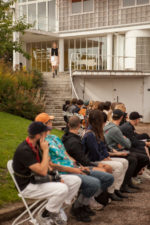 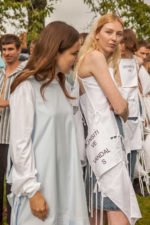 Being Fushion’s first year, the festival showcased a tighter edit of artists than Hilde has previously curated for the ambitious Collective Oslo Fashion Art Festival. In recent years, Collective has hosted some of the most visionary fashion and art photographers working today, including Campbell Addy, Pierre-Ange Carlotti, Coco Capitan, Sharna Osborne, and Johnny Dufort—who all eagerly flew economy class to Oslo to take part in the event. Hilde also invited bigger Norwegian artists like Bjarne Melgaard, who had been collaborating on a number of sculptures with hairstylist Bob Recine. Hilde and Bob had worked together under Vanessa Beecroft for four years in early 2000.

“I like to scout for people that have an agenda,” Hilde says, citing the art emerging from activist movements like Black Lives Matter, as well as Pierre-Ange Carlotti’s honest depiction of underground Parisian youth. On the eve of Fushion, she was looking forward to a new video composition by artist Frederik Heyman of ‘virtual embalming’ fame, who has recently been commissioned by Nowness, Nike, and Y/Project. She also had high praise for a performance by Norwegian/Sudanese artist Ahmed Umar, who sculpts clay statuettes to replace the family that disowned him when he came out as gay. “When I met him and he started talking about [his performance] I started crying,” Hilde remembered. More commercially minded exhibits on the Fushion schedule included photographer Richie Talboy’s work for the new issue of V magazine, featuring Norwegian musicians Okay Kaya, Anna of the North, and Astrid S. Oslo-based photographer Duy Nguyen, AKA Vitaboy, revealed a small exhibition of personal work—including a hypnotizing portrait series starring celebrity photographer-slash-male muse Olav Stubberud.

Before Ditte founded Oslo Runway, a more traditional platform geared towards buyers and press, there was no fashion week in Oslo. But there was plenty of money, a growing community of local influencers, and an ongoing obsession with Scandinavian design generally. Oslo Runway grew faster than anyone had anticipated, and Ditte decided to cancel Oslo Runway’s February outing, as the project was entering its eighth year. Scandinavia already has fashion weeks in Copenhagen and Stockholm—it’s not big enough to warrant a third in Oslo. “The thing is that we still need an arena here,” Ditte says, adding that moving to Copenhagen is too expensive for most young designers, making it nearly impossible for them to grow. “We still need somebody who collects all the creatives, both in art and fashion. They gather, they mingle, they grow with each other and by themselves.” In April, she sat down for a coffee with Hilde, and they decided to band together.

Fushion designers are still welcome to do runway shows, but most wanted to collaborate with artists to grow their DNA, and vice versa. One of the few runways on the schedule was by Avenue, founded in Oslo by Ingvild Abrahamsen, Gustaf Gyllenhammar, and Espen Follestadlook. The brand’s grunge-influenced collection utilized effortless natural textiles, expertly patchworked and paneled denim, and collaborative pieces by local artist Are Blytt. The show took place at Villa Stenersen, designed from 1937 to 1939 by the architect Arne Korsmo, a fitting symbol of Norwegian functionalism. One of the most quietly ambitious presentations was by Mardou & Dean Souterrain, a denim-anchored brand also comprising more avant-garde custom pieces. Creative director Ingrid Bernholt had collaborated with multimedia artist Victor Nicolai on a series of 35mm ‘fashion’ photographs scanned with real butterflies—“No animals got harmed during this!”—and accompanied by a short film about intimacy and social media. Bredholt is firmly opposed to the market demand for huge seasonal collections, instead designing small runs of garments released over long periods of time. 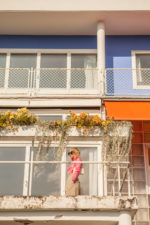 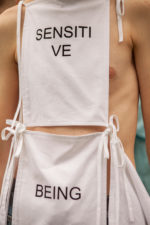 “I remember I was a little shocked the first time I understood people, not working in fashion, don’t know that every garment you buy is sewn by a person,” Bredholt said. Her collaboration with Nicolai was a way to scale back and document only a feeling, separating merchandise and product from art and vision. “We must find a better balance between art, a designer’s vision, and culture in juxtaposition with commercial sales,” she said. Trans-seasonal may now be the default setting, as both designers and customers grow tired of the relentless seasonal fashion calendar. Take the aptly named, anti-seasonal Fall Winter Spring Summer, known for tie-dye shirts that blend Oslo ease with a psychedelic streetwear edge, and which recently collaborated with Cala Jade on 100% silk handbags hand-dyed with turmeric.

At the same time, a minimalist Scandinavian aesthetic can feel limiting for designers and artists who venture far outside of it. Anne Karine Thorbjørnsen’s debauched-luxe satin gowns and artfully deconstructed suits have caught the eye of Dover Street Market, though she’s had zero interest from local stockists. Duy Nguyen’s photography explores a maximalist aesthetic inspired by the Asian countries he’s lived and traveled in, and he says this can prove an obstacle in a city where few young photographers are given the chance to shoot big campaigns. “Being a Norwegian third culture kid of Asian heritage, and spending years living and traveling in Asia, this has definitely affected my reference for photography and image-making,” he says. “This doesn’t seem to translate that well after moving back to Norway. But I do feel that, with consistency and patience, I will eventually be able to reach people willing to explore my aesthetics and ideas.”

There’s a strong familial vibe to Oslo’s creative scene that makes young talent determined to flourish at home. And as brands are increasingly built from community—even in a cutthroat city like New York, fashion is mutually supportive—rivalry might be an outdated notion anyway. Anne Karine Thorbjørnsen likely shares customers with Michael Olestad, who collaborated with Jakob Landvik, whose sister Sofie Landvik is the star of Thorbjørnsen’s campaign. It’s normal to see one designer at another’s afterparty, if not wearing another’s clothes. “People always ask me, ‘Is there something unique with Norwegian design,’” says Ditte. “I’m like, ‘It’s Norwegian.’ The whole DNA now is the whole DNA, it’s the whole lifestyle.” 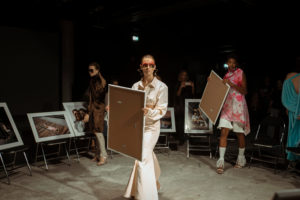 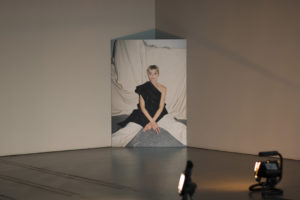 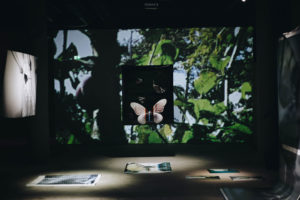 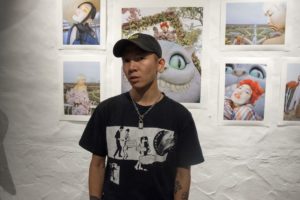 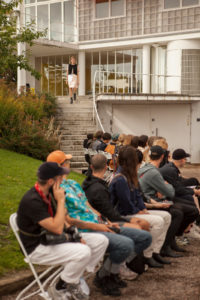 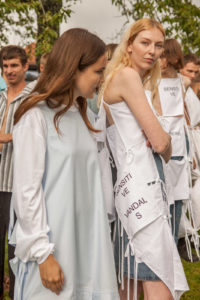 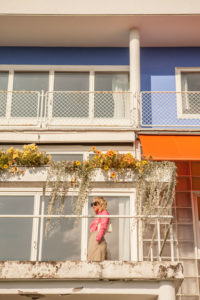 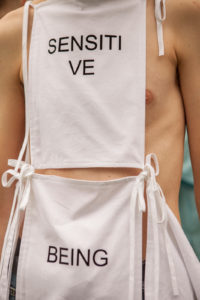 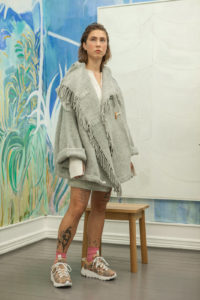 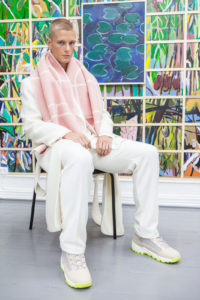 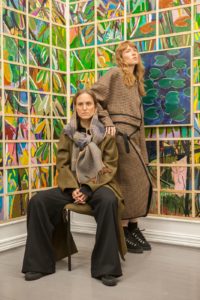 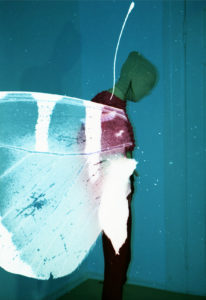 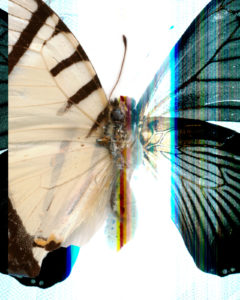 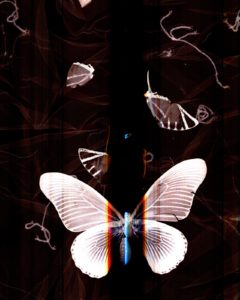 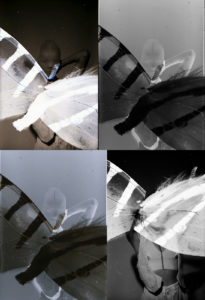 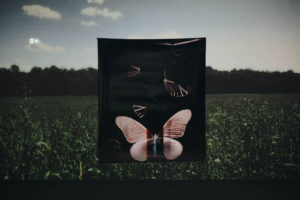