We often get so caught up in the daily flow of life we forget that what we create is more than just a source of income. We get lost in the hustle to survive, forgetting that the fruits which we bear are healthier and more wholesome when left to fertilize naturally, without artificial pressures like deadlines and expectations. Our studios and offices often become factories in which to facilitate concepts and ideas quick enough to keep up with the pace of survival, rather than being sacred spaces to mentally undress and be inspired.

Creating such a space of sacrality was the intention of art consultant Lena Evstafieva, her musician spouse Jerome Hadey, and Parisian nightclub owner Lionel Bensemoun when they launched Villa Lena—an ‘agritourism’ experience—in 2013. When Evstafieva’s family purchased a 19th century villa in 2007, the property was in ruins—having been passed through several owners and generations during its previous incarnation as a hunting lodge—but it still held historical significance. Drawing on their combined experience across art, music, entertainment, film, and fashion, the trio decided to turn the villa into a sort of escape; an agricultural, creative, and cultural utopia.

“We wanted to give back to the artistic industries, and create a space where nature, culture, and community combine,” explained Evstafieva. Today, the villa houses new artistic talent every six weeks as part of its residency program, which runs from April through November. Since 2013, the program has created short-term sacred spaces for over 150 artists across fields including photography, journalism, and music. The residency runs alongside the Villa Lena’s hotel, which houses guests from all across the world and operates throughout the year. Workshops and exhibitions are put on by the artists to involve the hotel guests, exposing stayers to a variety of art forms and cultural perspectives.

“With each roster we’ve been aiming to cast our nets wider during the selection process,” Julia Scott, the foundation’s director, explains. She admits that “this particular group is not very culturally diverse as a result of a few last minute dropouts we had,” an issue that plagues many artist residency programs, particularly those in remote locations. “It’s something that Lena and I are really thinking about a lot more in trying to ensure that everyone from all over is involved.”

Nevertheless, the melange of talent found in this most recent roster of artists was vast, including photographers, journalists, musicians, and sculptors working across several different genres. Document sat down with four of the artists on site—Sam Rock, Jody Rogac, Freddy Tuppen, and Lucinda Chua—to discuss their personal experiences and the importance of sacred spaces. 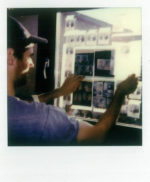 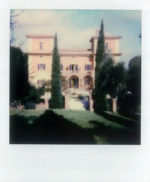 What genre would you best use to describe your work, would you consider it fashion or art?

Anything can be art, but I respect the people that actually do art, so I personally wouldn’t describe my work as such. It’s observation, it’s obsessiveness, it’s therapy, it’s a desire to collect, a desire to make, it’s finding self worth. It’s about all these things, centred around the motive, ‘What can I make that actually makes me feel good, and makes others feel good?’

What were you expecting from Villa Lena? And did the space meet your expectations?

Yes , well I’ve been here for a weekend before so I was already aware of what the space was, so when I actually got here I felt at home straight away. It also came at a perfect time where I needed a break, I needed to go and sit in peace and think about things and just doodle, make other things and experiment with film development techniques (as I’ve been doing lately). Just to kind of take a step back and re-evaluate everything. Also, there’s nothing better than being around other artists from different disciplines, to learn and just to talk and discuss. The concept of an ongoing community encourages you to constantly find interesting things to talk about.

What’s your sacred space in London?

London is actually still new to me, as I only moved back two years ago. My life pretty much revolves around being in the studio and being in the lab, which is what I would describe as my sacred space. The lab itself is comprised of around 100 different photographers, and after all being in the same space in different darkrooms developing for some time, we kind of all know each other in some way. I also try to go to galleries and stuff like that—I just always want to ensure I’m feeding myself creatively.

What will you take away from this experience?

I was saying the other day, I feel like I’ve had a blood transfusion—I’ve just cleaned my blood. Being here for so many weeks, of course you still go through the lows and highs, but you have to find ways to push yourself through these moments. Even if I don’t use anything I’ve physically created from here, I just feel mentally filtered. I’ve seen the cycle in fashion…one year becomes the next becomes the next, and through it all, the passion begins to die and the business person takes over. I just think it’s so important to break that timer and do other things. It’s important to constantly find new experiences to inspire yourself, and create your own references. 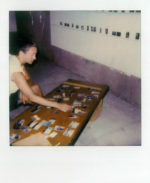 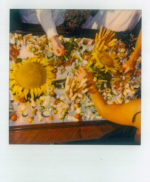 In NYC, apart from your house and your studio, what’s your sacred space?

I really think it’s just my studio. I really do enjoy being there, as it’s a communal space with other artists. I love the space that I’ve made there for myself—I can choose not to work while I’m there, and just relax, or on the other end of the spectrum, things can also get really intense work-wise. If I had to choose somewhere that wasn’t my studio, I would say I really enjoy going to the Met.

In coming to this residency, did you have any expectations? If so, what were they, and were they met?

I’ve never done a residency before so I didn’t really know what to expect. I have friends who’ve done many, and it’s something I’ve always been interested in doing…I originally thought that I was gonna come here and make a ton of work, like, ‘Shoot, shoot, shoot.’ And when I arrived, for the first few days, I noticed that I had brought this New York hustle mentality with me, so I had everything planned out in my head. It felt so bad, I was just stressing myself out, and it took me a good couple of weeks to realize that was exactly what I was doing—bringing my NYC mindset to this place. I just needed to let that go, and once I realized that, I started having a much better time.

What have you been working on while here?

I’ve been working on this book edit. I’ve wanted to make a book for a long time. For this book I started going through all my old negatives from when I first moved to New York 10 years ago. After editing down the images from the initial 1000 I had selected, and making the prints, I was just trying to find what works for me. I was looking for a world that makes sense to me, a thread that I could pull out that wasn’t necessarily what everyone sees all the time, like fashion and portraits and commercial work. Instead, I wanted to move towards something more intuitive. I brought all those prints here with me so I could spend the time to re-create and sharpen my vision, and it took around six weeks to get to this point.

What will you take from this experience?

To remember to slow down, and spend more time with my friends, and to nurture that as much as I do my work. And to have a well-rounded life and remembering that it’s completely okay to do nothing, and also learning to say no more. 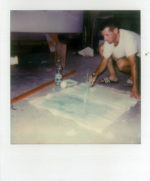 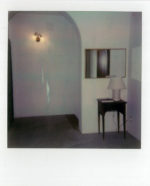 What were your expectations coming here and were they met?

I’ve ended up doing things that I didn’t expect to do. For example, I have never worked with paint before, but being here I wanted to do something entirely new. Most of my work is quite concept-driven and influenced by some of the constraints of architecture or led by a specific idea or research. Coming here, I wanted to try something totally new and just be completely intuitive with the creation process without being critical with myself.

What’s your sacred space in London?

I would surely say my studio.

What will you miss the most about Villa Lena?

The people. Having the opportunity to have someone around when you need that extra eye or perspective has definitely helped. Also, the lack of distraction, the simplicity of the day-to-day existence. Having fewer choices, and being in some ways isolated, has for sure helped me. 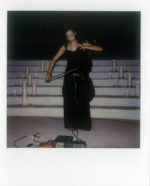 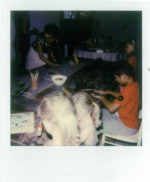 As a performer, what’s your process before and during your stage time?

When performing, I have an improvised cello set, without any set songs or tracks. A lot of it is responding to the energy of the room and in a way allowing my audience to lead me. I think of it as kind of like DJing, responding to the feels of the audience, and making it into something that we all create together. However, I’m constantly aspiring to get to the state where my mind is completely blank, to the point where I can get so deep inside the music that I don’t think about what the notes are. I’ve done, like, one or two shows where I’ve kind of forgotten that I was in the room, and I’ve just let the music flow through me. That’s pretty much the state I’m aiming to always be in—to be so present that I’m no longer self-conscious.

At the moment it’s really varied. Sometimes I do shows, other times I do scoring work, at times I’m collaborating with other artists. It really depends on the period.

What did you expect from this residency?

This is my fourth residency. I actually had a visual artist friend who had come before and he seemed like he had a really good time. But I tried not to think too much about what it would be like. Being here as part of NTS— which is the partner program for musicians—one of the things we need to create during our stay was a show that would be an hour-long broadcast on NTS. I actually decided to create an hour’s worth of original music that I’ve written and recorded. It’s been a lot of work but my process has changed compared to if I’d been in the studio back in London. I’ve been a bit bolder with the moves that I’ve made each day.

What will you take from this experience?

I think it’s just really good to get out of your habits. Coming into a different place with completely new people—who you eat with, laugh with, and have a chat with—gives us moments where we feel really grounded, but it’s also up to you to use the time however serves you best as an artist. From this, I’ve definitely pushed myself much more. 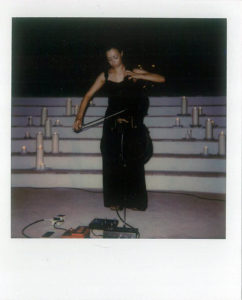 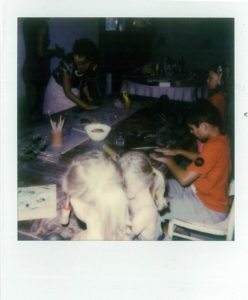 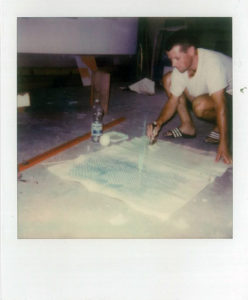 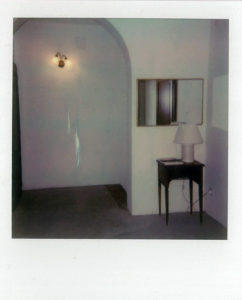 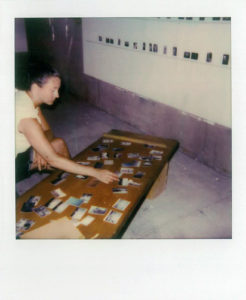 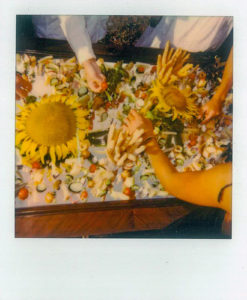 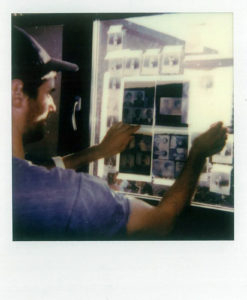 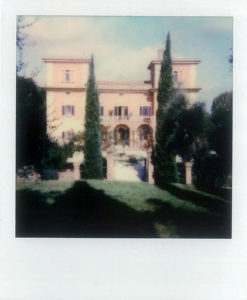