Margaret Chardiet, aka Pharmakon, can’t stop society from falling apart, but her experimental music is a reminder that you’re not the only one who knows that something's wrong.

Margaret Chardiet’s new album opens with the sound of a factory hammering bodies and brains into jelly. Pulsing industrial digital groans throb like aneurysms amid cascades of feedback before Chardiet’s distorted voice begins to shriek tormented koans. “How many vacant spaces / Can be filled with empty words?” The track, titled “Homeostasis,” is only four minutes, but listening to it is like being trapped in an exquisitely crafted, claustrophobic eternity.

New York-based Chardiet, who performs under the name Pharmakon, has been creating brutal soundscapes for more than a decade. One of the most well known and respected experimental noise artists working today, she’s perhaps most famous for her 2014 album Bestial Burden, which centered around a bout with illness and included the sounds of rasping, hacking, and spitting turned up to an unbearable volume. Her latest album, Devour, on her longtime label Sacred Bones, is similarly fascinated with the grotesquerie of the body, but from a more directly political perspective. Its lyrics use self-cannibalization as an allegory for human self-destruction, both personal and global.

“We have an all-consuming hunger for self-destruction,” Chardiet tells me by phone. “And when we think of self-destruction, we tend to think about it on a personal level, like drug and alcohol use. But it’s also things like the nuclear arms races, like climate change. Like how we get rid of our human brothers and sisters.”

We’re in a bleak moment, politically and environmentally, and part of Devour’s brilliance is that it captures that sense of inescapable futility, without trying to pretty it up, or to offer false sunshine and hope. The track “Self Regulating System,” for example, sounds like a machine grinding in endless repetition, soldering together some dripping, belching nightmare. “Running circles like frightened cattle / In a frenzied stampede,” Chardiet cries. It’s an ode to hapless self-slaughter.

“I think that there’s proof that Homo sapiens have been fairly self destructive as a species as a whole, throughout our evolution. And it’s hard to say whether that is innate within ourselves, or whether this is a choice,” Chardiet says. “But for some reason, societies have consistently developed over the course of human history to subjugate some, and to bring a very small number of people into power.”

That’s not a very cheerful insight, and listening to Devour is in part an exercise in misery and self-annihilation; it tears you apart with its teeth, and then steps on whatever bits remain.

But even as the music embraces sadness and self-loathing, Pharmakon’s carefully curated ugliness also serves as a kind of resistance. Chardiet notes that she was attracted to noise music in part because unlike pop, or rock, or country, or hip-hop, it is “music that doesn’t have much of a risk of becoming commercialized.” Power electronics and noise are so loud and misshapen and wrong that they can’t be used to lie and reassure you that the world is right. “It’s not that you failed to fit into a working order,” Chardiet yowls on the track “Spit It Out.” “It’s that the order was devised to fail you.”

Chardiet does think our culture and politics are meant to fail and torment people. “I think that capitalism is absolutely designed, by its very nature, to make sure that there are consumers who value consumption over all other things. And it encourages people to keep buying and keep giving their money to the systems that keep people subjugated and out of power.”

That vision of capitalist self-devouring calls to mind horror movies like The Day of the Dead, in which the undead wander through a shopping mall, stumbling over escalators and into fountains and feasting on the flesh of the living. But Chardiet says she was deliberately trying to avoid zombie imagery. The cover is the least gruesome of all her albums. Rather than showing maggots swarming over her, like the cover of 2013’s Abandon, Devour depicts Chardiet placing her mouth on a clean plaster cast of a face. It’s cannibalism that almost looks like a kiss.

Cannibalization doesn’t just mean blood and gore and tearing hunks of flesh off with your teeth, Chardiet says. “If you think about the word cannibalization, it can also refer to pulling from within something in order to sustain itself. A writer might cannibalize their past books to come up with their next plot.” Self-cannibalization can be about using yourself as a resource, or surviving on nothing. It means turning bloated, diseased flesh into life—or at least into fuel.

“I found myself in a position where I was surrounded by self destruction, and making Devour was my way of not falling into that trap,” Chardiet explains. “This is my way of fighting against it and offering myself, and hopefully others, an alternative.” Devour feeds on its own anger and rage and despair and excretes a beautiful monstrosity. Chardiet can’t stop humanity from eating itself. But her bleak noise is a reminder that you’re not the only one who knows that the world is wrong. 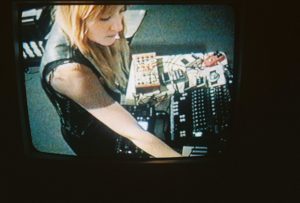 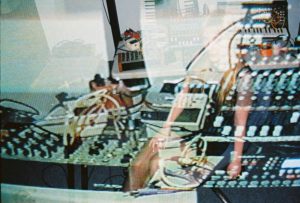