The artist explains why he built a giant motorway overpass in the Tate Britain—and why you shouldn't fuck with fairies.

In London’s Tate Britain there currently sits a to-scale model of a motorway bridge underpass. Created by the British artist Mark Leckey, the snippet of highway is identical to a real underpass on the outskirts of Liverpool, except this one houses a medley of British folklore and Snapchat style video clips. It’s the foundation of Leckey’s new exhibition, titled O’ Magic Power of Bleakness, and is the most recent incarnation of the artist’s enduring fascination with memory and the working-class culture of his youth.

“I don’t know how you talk about class now without falling into a cliché,” Leckey told me five months prior to the opening of his new show. Sitting at his kitchen table at his flat in North London, he’s trying to tease out the link between his forthcoming work and 1999’s Fiorucci Made Me Hardcore, Leckey’s ecstatic found footage opus spanning three decades of British club culture, that propeled the artist to cult status 20 years ago. Explaining the vision in his head for the latest work, which at the time was still in progress, he chuckles “Basically it’s about fairies and scallys.”

O’ Magic Power of Bleakness is Leckey’s first time back at the Tate Britain since he won the Turner Prize at the museum in 2008. Three pieces of video work play on loop, on the hour every hour, housed in the dark underpass. The new work, On Under Under In, is a 16-minute audiovisual play split across portrait screens resembling phones, the shadowy drama unfolding like if The Blair Witch Project were being live-streamed. (The other two videos are Fiorucci and 2015’s Dream English Kid 1964-1999 AD.)

Elsa Coustou, the co-curator of Leckey’s exhibition, describes the bridge as a motif in Leckey’s art; also appearing in his mid-career retrospective at MoMA PS1 three years ago, and now becoming a stage for the rest of his work. Leckey says it’s based on a vision he had as a child, in which he saw a fairy appear in an underpass.

“When I started to think about it again, I looked into folklore about fairies,” Leckey says. “It’s unnerving how close to all the reported stories about how fairies behave were to my vision.” When I ask him to explain what they were like, he says, “Fairies are more than just mischievous. Basically, you don’t fuck with them.”

Running through the Wirral in the North West of England, the M53 motorway is an unlikely setting for artistic inspiration. But it was under the flyover closest to his childhood home that Leckey’s obsession with storytelling and nostalgia was born. Lecky didn’t think about the vision of the fairy until he was 19. He had gone back to school to get his O Levels, and was asked during an English lesson to write about a childhood memory, which resurfaced the vision. “I’d always thought it something that genuinely happened to me,” Leckey explains. “As I wrote, I rationalized my enchanted childhood mind, and kind of broke its spell.” He says he’s been repeatedly trying to break that spell ever since.

For On Under Under In, Lecky designed Adidas tracksuits, which are worn in the video by boys who contort and jolt as if possessed. (Coustou told me the artist had modified everyday garments to look like medieval hoods and cloaks). The fashion of football hooligans, known as casuals, and scallys has been a hallmark of the scouser’s work since Fiorucci. Predating Youtube, the anthology of U.K. nightlife took an abstract approach to video mashups before they flooded the internet, using archival footage of northern soul nights and acid house raves. Fiorucci’s midway chant of brands like Fila, Head, Kappa, Ellesse, Sergio Tacchini, Burberry, and Diadora live on in Jamie xx’s “All Under One Roof Raving,” illustrating the spell ‘90s rave culture holds even over those who never experienced it. But you can’t accuse Leckey of misty-eyed nostalgia. “I have this problem now,” he says of his famous work, “where I show Fiorucci and it’s full of casuals. I’m very ambivalent about casual culture now.”

Culture in general has completely changed in the 20 years since Fiorucci was made, with the most obvious influence being the internet. “It’s made everything more complex,” according to Leckey. “There was a sort of analysis that you can bring to 20th century subcultures that no longer fits.” Leckey struggles to find the words, but says it’s not that culture is more polarized now—even that isn’t strictly true because poles shift and can even horseshoe)—it’s that they intersect in a new way: “Look at Bronies. They can be into My Little Pony and the alt-right and somehow accommodate the two.”

Just as Fiorucci was born of nostalgia, in his new work, Leckey is trying to find a new language to talk about working-class culture that isn’t trite or complacent. And he’s found that language by telling honest stories of the moments that shaped him. Underpasses are only designed for people to travel through them, but in the wave of British post-war urban planning, they became destinations entrenched into the seams of adolescence. Too young or poor to go out to pubs and clubs, kids spent hours, days, and weeks concealed in these public spaces, away from prying eyes of parents.

This is where Leckey says the pixie encounter happened, but the dark allure of motorway flyovers shares more than mythology with his other work. I suggest his world of underpasses is a little like club culture, left to grow outside of the watchful gaze of wider society. “There’s this cheesy line,” he replies, “Club culture is like mushrooms, it grows where it’s dark and damp. Hidden spaces can create a culture in themselves. In the ‘70s, you had a Clockwork Orange kind of culture, and now you have all that roadman shit.” Culture is an ecology; when ignored, it can transform into something new. Leckey cites northern soul as a classic example: “It mutated in this splendid baroque way that just became more and more complex.”

Leckey believes today’s youth is the most radical generation since he was barely out of his teens: “It’s their desire for conflict and for not adapting. They seem more determined, radical, and their way of thinking is a lot more fluid. It’s like they’re cybernetic—they can adapt, transform, and attack. It makes me look at my generation and think, ‘We were just Thatcherites is some way.’” Looking back on his generation, the main question posed was, ‘Why can’t we have fun?’”

I ask him what he thinks about the current club culture in London. “You’re asking a 55-year-old dad,” he warns me. “Please don’t ask me about it.” As we talk about raving and culture, Leckey goes back and forth on his stance, but is unwavering in his view that art is definitely changing: “The art I was schooled in and enculturated in, that seems to be on its way out.” Leckey says the art world that grew out of the 1980s is breaking up. “That period is over. It’s properly done,” he says. “Frieze ten years ago could have had someone like Jeff Koons while promoting some sort of radical gesture but I don’t think it could contain both now.” When Leckey went to art school, he was boundless and free to make anything. He could be transgressive and an anti-social, self-made artist. Now, he sees that mindset as archaic. “Maybe it always was, and I got seduced by it. And I could because I’m a white man. It became a symbol of neoliberalism, the ultimate individual.”

Fiorucci and the bridge installation are about more than Leckey himself they’re about his working class roots. After Leckey left art school, he didn’t make any work for ten years, because he was turned off by all the art world language—it left him wondering if he was clever enough to be a part of that world. But now he knows art isn’t purely academic. “Because art’s a bit supernatural itself,” he explains. “If you approach it rationally, it collapses fairly quickly.” 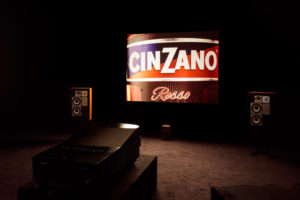 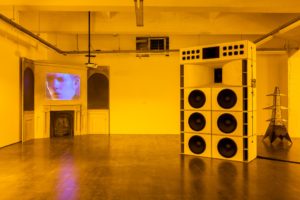 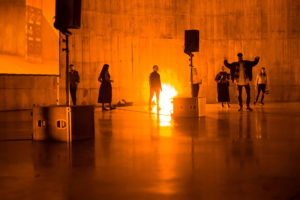 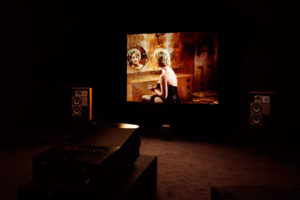 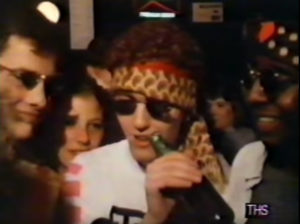 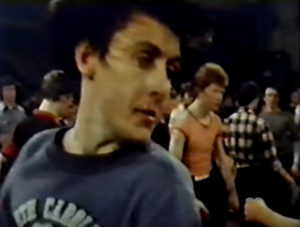 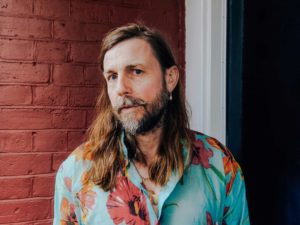