Peaches wants people to be comfortable in their own bodies. That’s the message the queer electropunk icon is trying to send with her new, transgressive exhibition, Whose Jizz Is This, at the Kunstverein in Hamburg, Germany through October 20, 2019. The Canadian, Berlin-based performer broke out in the late ՚90s and early aughts after urging people to “Fuck the Pain Away” with pounding synth beats and provocative lyrics that ended up in shows like The L Word and Ugly Betty, as well as films like Lost in Translation and Mean Girls. Although the exhibition marks the artist’s 20th anniversary since launching her career, Peaches wanted to forgo the traditional retrospective format for something entirely new—and that includes larger-than-life replicas of a strange sex toy known as a Double Masturbator, which has two kinds of “lips” on it. Peaches called the sculptures “Fleshies,” creating a “living” organism that allows people to venture into her mind through lights, sculptures, and sound.

Ann Binlot—Let’s start with the genesis of your exhibition at the Kunstverein in Hamburg. How did the idea for that start?

Peaches—It was going to be more like a retrospective exhibition. Then I couldn’t wrap my head around why, if I’m the artist, would I be doing a retrospective on my own art. Then I was like, ‘No, I want to make new stuff. I want to go head on into it.’ So that’s how the genesis of making stuff came. And then I came across this very disturbing video of this dude giving a review on something called a Double Masturbator. I’m not opposed to people using aids. First of all, the look of this thing—it was a tube with two holes. It was obviously a gendered woman’s mouth with lipstick, and the other side was a vagina. It disturbed me that it had just been reduced to holes in a tube. What does that mean? It made me think of chickens, and how they’re bred to feed mass, mass amounts of people. Some of them that they breed inhumanely don’t have beaks anymore, and they have extra wings, and they have this design of whatever is useful for consumption. So it disturbed me that way. Then I thought, ‘What if these Double Masturbators realize that they have the tools to pleasure themselves without humans and they want to emancipate themselves sexually and independently?’

Ann—Why do you want to reject words like “sex toy” and “masturbator”?

Peaches—I don’t want to. The Fleshies do because they’re rewriting their narratives. So I respect them. I respect them wanting to have their own, new name.

Peaches—They just came up with it. They came up with something that sort of gives this sort of tactile and active name to themselves.

Ann—What do you want people to realize when they’re looking at these sculptures?

Peaches—Besides it being a sculpture, it’s very important to realize that it’s framed within a 14-channel sound installation and a 14-channel light installation. All the architecture is part of the art too. There are no podiums used; there are no art walls. The stage is framed in stage design. So every podium or every wall is made out of stage design, made out of stage risers. All of that relates to my experience with emancipation and being on stage and how I emancipated myself through performance, so I’m giving them this [platform] to help them emancipate themselves through stage.

Ann—How does it differ from creating conceptualizing a stage performance?

Peaches— It’s not from one angle; this is more of an immersive installation, not unlike something like Sleep No More, where every time you go through, or whichever way you want to go, it will be different. There will be different lighting, different sound, different moods, and they can change at any time.

Ann—How did art influence your exhibition?

Peaches—I’ve always been very fond of people like Paul McCarthy, Sarah Lucas, obviously Yoko Ono, and younger artists—Anna Uddenberg. You know, people who have a sense of sexuality and a sense of humor. Cindy Sherman, people like that.

Ann—How have attitudes towards sexuality and gender evolved from two decades ago?

Peaches—Well, they’ve exponentially grown in every direction, let’s say that. There’s been way more media attention. There has been way more acceptance, especially younger people. The way they see themselves as non-binary, and the way they’re open is super incredible. But we can’t forget that there are more trans murders than ever before. And there’s more LGBTQ hate than ever before. with all the freedom has also come the realization that hate will come out more. So that’s sad, but it doesn’t mean that we can’t stop. 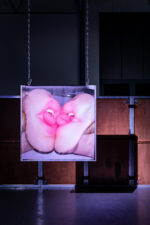 Ann—Do you think that the lack of 24-hour surveillance social media platforms allowed for more creative freedom when you were coming of age in the early aughts?

Peaches—Yes and no. In terms of me and my development and me having the privilege to have my own platform and people engaging in my platform allowed me, especially with my video work to be far more progressive than I’ve ever been able to be. Because in other ways, I would be making videos, and there would be no platform for them. There would be times when the only platform is, like MuchMusic or MTV or things like that. So that didn’t matter anymore. From my last album [2015’s Rub], I was so over the moon that I was able to make videos the way I really wanted to. I always did anyway, which is why I was never really featured on those stations, but I lost. I never saw them as music videos. I saw them as extensions—video works on their own that express the music, but I really got to make what I wanted. So in that way, I think it was really good for me.

In terms of my seminal song, “Fuck the Pain Away,” that was a bizarre thing anyway, because it was 2000. There’s no YouTube; there’s internet, but we’re not all obsessed. The way that that became an underground-overground weaving hit without ever being on the radio, without ever having a video, was super interesting. How it got to people of influence, how it got to clubs everywhere, that was super interesting and probably one of the last times something like that could happen.

Ann—Does the advice to “fuck the pain away” still holds true?

Ann—Do you have any new “Teaches of Peaches?”

Ann—How do you how do you weigh the criticism for your work being overtly sexual? How do you deal with that?

Peaches—What’s to deal with? I feel like that’s people’s own perception and their own problem. What I’ve enjoyed at these exhibitions is when kids are there with their parents.

Peaches—I always talk to them. Kids know what’s too much for them. Earlier cultures really understood that the body is important to understand. Now we’ve learned to shame our body and to cover it. My main goal is to let people feel comfortable in their own body.

Ann—What can we do to do that?

Ann—How did we become so uncomfortable in our own bodies in the first place?

Peaches—I think a lot of patriarchal ways. On an extreme sense, look at A Handmaid’s Tale, you know, you can probably say it all. Power, power moves, political moves, and insecurities. My lighting designer’s daughter came to the live show, one that I’ve just done with a cast of 40. Her parents are cool and everything. After the show, she said, ‘I get Peaches. Everybody should love their body.’ Then the next day, she just got on the stage, she started going, ‘I, U, she together,’ putting on the vagina costume. She got it. If we give people, give kids a chance, then we can discuss things with them on a more detailed, intellectual, and emotional level instead of just cutting it off. You know?

Ann—Yeah. Because I think it’s because we are so repressed that like all these crimes and negative attitudes happen.

Ann—And are we going to be seeing more Peaches institutional exhibitions?

Peaches—Yes, exhibitions and more live shows and connections between the two and making new connections. Let’s see what else comes up? 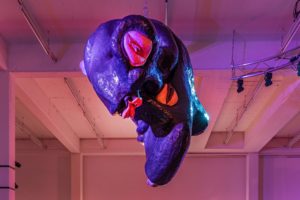 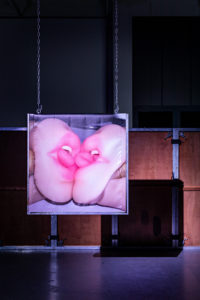 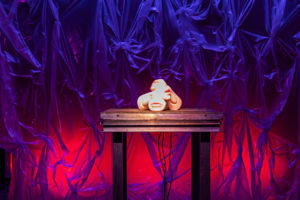 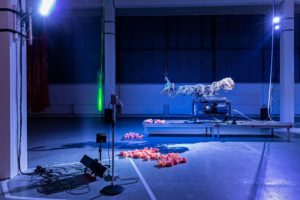