Last month, space travel enthusiasts, history buffs, and conspiracy theorists all observed the 50th anniversary of the Apollo 11 moon landing. So, more surprisingly, did sneakerheads. A sneaker auction hosted by Sotheby’s and Stadium Goods in July was highlighted by the 1972 Nike Waffle Racing Flat “Moon Shoe,” designed by Nike co-founder Bill Bowerman, which created footprints resembling those left on the moon by American astronauts in 1969. The Moon Shoe was eventually purchased by Canadian businessman Miles Nadal for a mind-boggling $437,500, shattering the record for the most expensive pair of sneakers ever to enter the market. In fact space travel has served as inspiration for a number of Nike’s most coveted sneakers over the years, including Tom Sachs’s Mars Yard 2.0, for which the artist created an elaborate “space camp” obstacle course. To celebrate the heroes of America’s space program—and propose some on-theme sneaker options for the 1.5 million extraterrestrial enthusiasts storming Area 51 next month—here are five sneakers with an astronomical inspiration.

Nike Area 72 Pack [above]
If you’re looking for new kicks for the upcoming Area 51 storming, look no further than the 2013 Nike “Area 72” pack. Released for the 2013 NBA All-Star game, this collection features the Blazer Mid, Vandal High, Lunar Force 1, Barkley Posite Max, and the Air Force Max, all fashioned with extraterrestrial colorways and a friendly-looking alien patched onto the tongue. We’re not sure how friendly the Area 51 aliens will be, but they will certainly appreciate that you tried.

Nike Air Max Lunar90 SP “Moon Landing”
In 2014, Nike celebrated the 45th anniversary of the moon landing with its now classic “Moon Landing” Lunar90s. Nike updated the Air Max 90 silhouette with a Lunarlon midsole, an American flag branding on the heel, and an all-over print of the moon’s surface. A fully reflective 3M upper causes light to bounce off the surface, reminiscent of a bright full moon. This futuristic Nike runner was released in extremely limited quantities, and finding a pair now is almost as difficult as reaching the moon.

Nike x Tom Sachs “Mars Yard” 2.0
In 2017, Tom Sachs decided to host his own space camp on New York’s Governor’s Island. It had been five years since he had released the first iteration of the Mars Yard, inspired by NASA’s Mars rover, and Sachs wanted to ensure that the shoes were being used for their original purpose—that is, being worn. Sachs made the “students” of his space camp work for their chance to purchase the shoe; climbing ropes and flying RC helicopters. While sneakerheads weren’t really expecting to undergo astronaut training, it’s a nice reminder that, at the end of the day, sneakers are meant to be functional.

Nike 6.0 x Buzz Aldrin “Rocket Hero” Mavrk Mid 2
10 years ago, for the 40th anniversary of the Apollo 11 moon landing, Nike honored one of the unsung heroes of space travel—Buzz Aldrin. The second man to walk on the moon partnered with Nike for his signature shoe, the “Rocket Hero” Mavrk Mid 2, a skate shoe adorned with a two-tone swoosh emblematic of the dark and light side of the moon. It also featured hand-drawn rocket diagrams on the inner fabric, and photographs of the moon which Aldrin had taken while orbiting Earth. Neil Armstrong might have been the first person to walk on the moon, but he doesn’t have his own Nike sneaker.

Nike Air Foamposite 1 “Galaxy”
The Foamposite was originally released as a signature model for NBA superstar Penny Hardaway but has since become one of the most unique and coveted models in the Nike Basketball catalogue. In February of 2012 the Galaxy Foamposite became synonymous with hyped sneakers. Sneakerheads camped in cars, tents, and on the open street for up to two weeks before the release for their chance to purchase a pair. The Foamposites’ upper shines in a galaxy print and the outsole glows in the dark. If we’re now at the peak of sneaker-hype, the 2012 Galaxy Foamposite was the tipping point that brought us here. 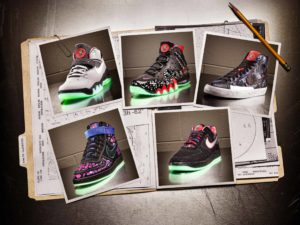 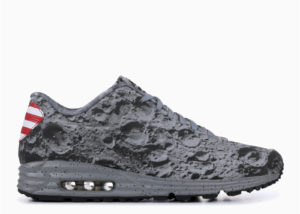 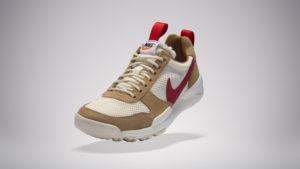 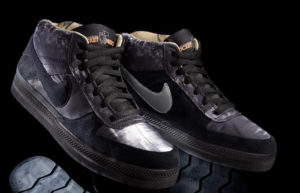 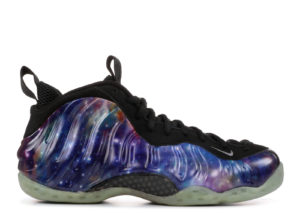