When Tom Ford joined Gucci in 1990, a new era was born: one that brought luxury goods to the forefront of popular culture. As the return of the double Gs took the globe by storm, in 1997, LVMH’s Bernard Arnault appointed Marc Jacobs as Creative Director of Louis Vuitton to design the company’s first ready-to-wear clothing line.

“Vuitton’s past campaigns were focused on travel. This was a big departure for them,” Peacock says. “They were conservative and traditional. Wealthy people would buy Vuitton but it wasn’t a fashion statement. They wanted to be hip.”

By the mid-90s, Guzman had achieved recognition creating unconventional advertising campaigns for companies like KOOKAÏ and Tag Heuer as well as shooting album covers artists like Janet Jackson, Jody Watley, and Total. But, as Hansen explains, “We were outside the fashion box. We weren’t reverential. We didn’t understand the respect of the couture. We were working in hip hop culture, and went with what we knew.” 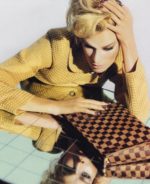 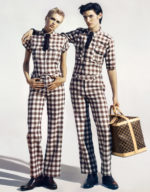 For the campaign, Guzman brought together a team that included fashion stylist Basia Zamorska, hairstylist Danilo Dixo, and make-up artist Mathu Andersen, who worked with Ru-Paul and Susanne Bartsch. They also recruited manicurist Bernadette Thompson—who recently had her “money nails,” designed for Lil’ Kim, exhibited at the Museum of Modern Art.

“It was very eccentric,” Hansen says. “They let us do whatever we wanted. This is not what fashion was doing then, but it is now. We brought hip hop to Vuitton.”

Inspired by the work of Dapper Dan, Peacock remembers showing a photograph of the Harlem haberdasher’s custom two-piece leather skirt suit and matching fez, which appeared on the cover of The Real Roxanne’s 1988 self-titled album. “I think hip hop glommed onto brands like Vuitton because it was a status symbol,” Peacock says. “They made it hip.”

Although the ad agency passed on recreating the Dapper Dan-inspired look, they loved Guzman’s idea to cast hip hop pioneer Grandmaster Flash for the shoot, his Monogram record case designed by Helmut Lang.

To style the shoot, Basia Zamorska remembers the challenges of having to request clothing from designers. “I was in between a rock and a hard place where I had to say, ‘This is going to be a huge worldwide celebratory campaign and I need to borrow and outfit but I can’t tell you what it’s for,’” she recalls.

For the Grandmaster Flash shoot, Zamorska followed the legendary DJ to Macy’s, where he chose a woolen plaid shirt made by either Carhartt or Woolrich, a pair of black Dockers, a pair of classic Timberlands, and a white Kangol hat. Zamorska remembers asking if Flash wanted to pay; he graciously declined the offer to foot the bill, informing her, “My funds are otherwise occupied.”

The campaign for the Centennial Collection was a resounding success, bringing Vuitton to the forefront of fashion before Marc Jacobs had introduced a single design. Guzman was hired to photograph four more Vuitton campaigns between 1996 and 1997. 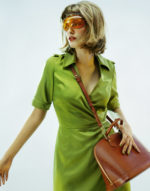 Given total freedom, the team made waves when they created custom checked clothing exclusively for the shoot, to match the classic checkerboard print for the Damier Collection. “We approached our work like an art project,” Hansen says. “We weren’t thinking about selling anything. We weren’t serious.”

Peacock agrees: “In the ‘90s, you could actually make fun of fashion to sell fashion. You can’t do that anymore.”

Zamorska remembers the moment fondly: “We were given a shitload of money to create something that stimulates all of us and push people’s buttons, rattle some cages, dig out some obscure beauty, and make ourselves laugh—and we did all of those things.”

The process for coming up with design concepts was very loose. Zamorska recalls sitting one morning, having coffee with Hansen and Peacock, wondering what to do about a bag they found a bit dull. They paged through a book of German Expressionist painting and found their answer in Otto Dix’s Portrait of the Journalist Sylvia von Harden from 1926.

“We pounced on it!” Zamorska says. “We wanted the girl to wear a monocle. Connie or Russell said, ‘They are never going to go for that,’ and we said, ‘Well let’s get one anyway.’ We shot it how we wanted it too look and then we shot it how we thought they would let us get away with it.”

Though the final ad did not feature a monocle, Zamorska’s original designs were highly in-demand, as people began calling the Vuitton store asking where they could purchase one of her amazing creations. 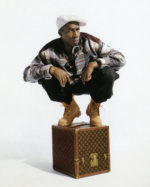 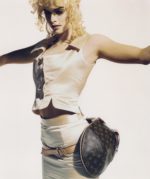 “It was so satisfying when it came together. It was only stressful because we were up against the clock,” Zamorska says. “I remember one of the dresses, the dressmaker was up all night and we literally finished sewing it on Kylie Bax. Then to make it flap in the breeze, I attached invisible thread because it was too fragile use a wind machine.”

Their ingenuity did not go unnoticed inside or outside the fashion world. Zamorska’s twin safari suits, inspired by British designer Antony Price, were designed for a pair of androgynous male and female models who favored each other. The absurdity of the image was not lost on American painter Georganne Deen, who used it as the inspiration for her 1997 painting, aptly titled, We Must’ve Been Out of Our Minds.

For Guzman’s final Vuitton campaign, they hired Thierry Colson, who was working with Martin Sitbon, to style the ads for the landmark Epi Leather Collection. “I arrived in New York with tiny little luggage, and they were a bit scared because they were used to famous fashion editors with tons of assistants bringing 10 racks full of clothes and shoes,” Colson says.

Picking up on the vivid color schemes, Colson and Guzman created technicolor fantasies that are still fresh some two decades after they were made. “I picked whatever I felt was great for the image and it all worked perfectly well,” Colson says, “but it’s a bit like working like an acrobat without a net!” 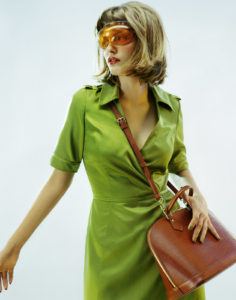 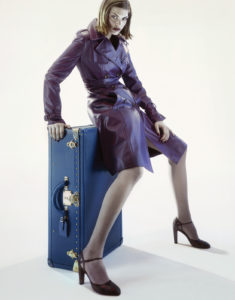 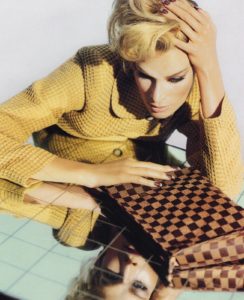 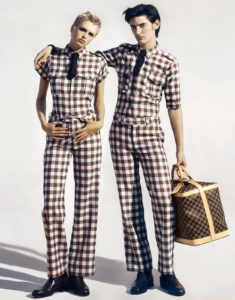 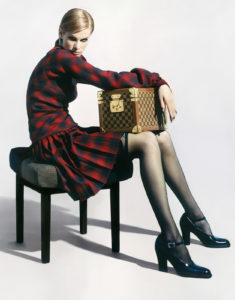 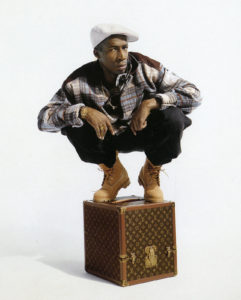 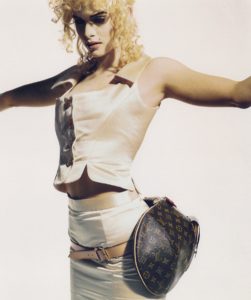 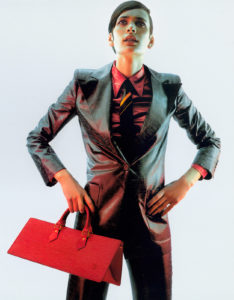 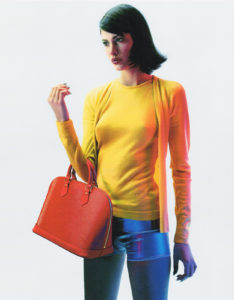