Is it possible to reinvent haute couture, the art of making custom garments for wealthy women that can be traced as far back as the 17th century? Japanese fashion designer Yuima Nakazato thinks so. Nakazato, a graduate of the prestigious fashion program at the Royal Academy in Antwerp, took it upon himself to present a couture collection on June 30 that introduced three new sustainable techniques to the industry: TYPE-1, a clasp system that eliminates the need for a needle and thread, and is produced from 99 percent plant-derived materials; Brewed Protein, a material made in collaboration with Japanese biotech firm Spiber, which involves a cocktail of designed genes and fermented microbes; and Biosmocking, a digital fabrication method of achieving three-dimensional textures on Brewed Protein. Welcome to the world of biocouture.

First, Nakazato demonstrated the TYPE-1 technique on a simple, long-sleeved, a-line dress made from a patchwork of various shades of Brewed Protein. Clothing made with a needle and thread isn’t exactly bad for the environment, so I questioned Nakazato about the benefits of TYPE-1. “It’s able to be customized or repaired very quickly,” said the designer. “That type of garment lasts much longer than before.” If there’s a hole, all one has to do is replace the piece of a material with another and reattach it to the dress using the clasps. If it’s hot out and one wants a sleeveless dress, simply detach the sleeves. If one wants to add a peekaboo detail on the shoulder, just unbutton the clasps. Want to go from a maxi dress to a minidress? Just pull off the bottom of the skirt. 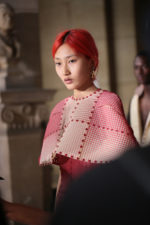 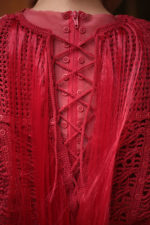 I closely examined the Brewed Protein material, which came in a few iterations—one felt like a soft combed cotton, another felt like hair, and the third was yarn that was crocheted. Still confused by the process, I asked Spiber spokesperson Tomokazu Nagai how it’s made. “Brewed is, you know—like beer,” he explained. “You can associate with beer, right? So after designing our amino sequence to make a protein, we use microbes for the fermentation process, which is the same process [used to make] the beer. After we double-double-double the protein we get, we create threads or film responding to any kind of format of the materials.” A little lost by the science speak, I asked if they could replicate the traditional couture accoutrements, like feathers or sequins, which are usually made from plastic. “Yeah, it might be in the future, possibly,” he responded.

Nakazato then showed me the textured grid of raised squares, made through a process he calls Biosmocking, on the mozzetta-like (the short cape worn by popes) part of a gown he designed. “This material has a super contraction when it’s put in water,” said Nakazato. “When it’s printed, we control [the percentage that] is going to change the shape…So these three-dimensional textures are made from this super contraction.”

Nakazato explained the inspiration for the collection, which he titled ‘Birth.’ “The materials are close to human skin, so it’s not a second skin, it’s going to be part of your skin,” he said. “I carefully chose [a natural skin color to cover every ethnicity], so there are different types of color, and also a very primitive and futuristic infusion. Also, crochet and hand-craftsmanship, together with digital technologies, are fused in the collection, so there are always two elements combining in the collection.” The foundation, meanwhile, is based on the Japanese kimono method. “Kimono is made from the rectangle shape, and you can change the sleeves or lengths very easily, so the traditional Japanese method is our philosophy, but [it’s] also from French Haute Couture methods, so we’re fusing two cultures,” he said.

With the complicated science speak and vague descriptions of the possibilities of Brewed Protein, I wondered if this could be the future of fashion. It’s quite possible—after all, everything involved biodegradable materials. “For thinking about the future of humans, it’s very important,” emphasized Nakazato. 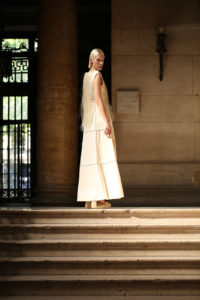 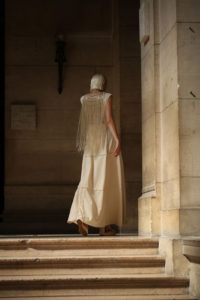 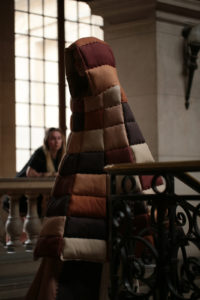 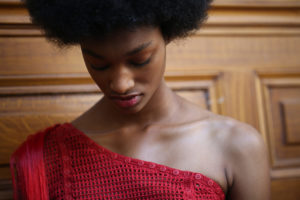 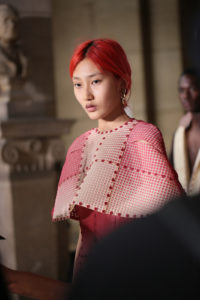 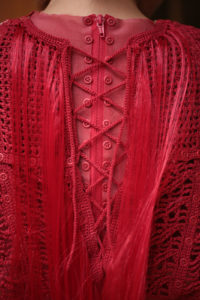 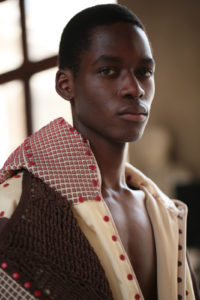 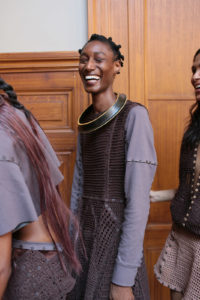