“I want people back home to know that people here have their back...we don’t only have Algerian people, we have New Yorkers from all walks of life that care and support us too.”

In Algeria, the words “government” and “mafia” are used interchangeably. Since 1999, the country has had the same president. In 2013, President Bouteflika suffered from a stroke, and has not been able to move or speak since. Essentially vegetative, Bouteflika is a mere figurehead for a corrupt regime of men, predominantly over 70 years old, who have been ruling the country. These men operate like gangsters, embezzling the majority of Algeria’s wealth as the fifth largest producer of natural gas in the world. An exodus of jaded youth, as young as 14 years old, have been fleeing the country on makeshift rafts in search of opportunity.

Following protests for political justice ignited by students at the University of Algiers in February 2019, President Bouteflika resigned on April 3rd. Since then, a 90 day mandate was issued for his affiliate Abdelkader Bensalah to serve as the interim President. Earlier this month, Bensalah’s interim mandate expired. Worldwide, protests have persisted in demanding the resignation of Algeria’s entire government, which has robbed the country of color, room to aspire for success, or dream of development.

For every Friday that there is a protest in Algiers, there are subsequent protests the following Sunday in different cities around the world. In New York, Union Square Park has been the site of protests in solidarity of Algeria’s fight for political justice.

For the 9th Sunday in a row, the park is occupied with about 200 protesters. Arms wrapped around each other’s shoulders, the protesters form a circle at the center of the crowd. Little kids dance around in the middle of the circle. Women dressed in traditional Berber clothing shake tambourines, smiling while dancing. Three young girls have a table set up with traditional, homemade Algerian cookies and cake. On one cheek of their faces is a small painted Algerian flag, on the other cheek is a painted American flag. This protest is a friendly celebration of the Algerian community and it’s supporters in New York.

Swaying from side to side, the crowd cheers “One, two, three, Viva L’Algerie!” First coined during Algeria’s fight for liberation from France in 1962, this revolutionary chant electrifies USP on this quiet Sunday afternoon. Document spoke to five attendees, here’s what they had to say: 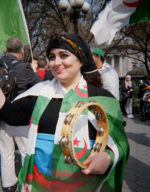 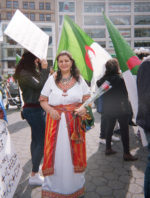 Omar Challal, Organizer of the Union Square Protests
“We are in the city of the United Nations, so in that sense, these New York City protests are more effective than any other U.S. city. We must stress: we don’t want a change in the regime, we want a full change of the regime. Everyone who has been in office from 1962 [the year Algeria won its independence from France] must go. We freed the country in 1962 but we haven’t freed the people yet. That’s an issue, we still have. We need entirely and exclusively the new generation to take control.”

Youcef Oussama Bounab, 23-year-old Algerian Immigrant studying Journalism
“Statistically, Algerians are an isolated community in the U.S. Mainly 80% of our family is back home, while only 20% of our family here. This means most of your heart is still there. Whatever our family feels back home, we feel that pain here too. I want people back home to know that people here have their back. We’re far away, but we still care. That’s why I’m speaking to people and gathering quotes. I’ll try to publish something in French for my family and friends back home to read. They should know that here today we don’t only have Algerian people, we have New Yorkers from all walks of life that care and support us too.”

Angel Valentino, American
“Algeria…I’m in my 60s, and Algeria will always hold a special place in my heart. And I’m not Algerian, I’m African American. Even though I didn’t go there, I always knew that I could. That they would welcome me as refuge. Since the ’70s Algerians have been taking us in. So many of the Black Panthers found refuge in Algeria. And everybody knew it too. Everybody knew that when you got to Algeria, Algeria opened their arms and they said “welcome.” Algeria knew we were coming with nothing and they helped. They put people up. And that’s wonderful. If you can do that for people that you don’t know but people that are oppressed, then you can do that for yourself. People are powerful. Alhamdulillah and power to the people.”

Anonymous, Algerian-American teenager
“The reason why a Syrian or Egyptian scenario will not be repeated is because it is not tolerated. Algeria upholds a democracy for the people. The ’90s when the government abused its power over the people will not be repeated, nor will the 20 year reign of the Bouteflika regime. Now, the people are united together. There are millions of people all over the world protesting against this regime, trying to bring forth justice and a true democracy. The people all for one are empowering change in Algeria, and this movement will not give up, despite the difficulty of the government giving up.”

Robert J Webb, American
“I was initially coming over to the park for the Free Lula Protest, but I heard about the Algeria protest every Sunday through word of mouth. So I decided to come on over and support both. Let’s keep ourselves educated on these global issues and find the time to come out and support them. Most importantly, let’s keep documenting it. I thank you for documenting this protest. If we don’t document history, somebody else will document a mystery.” 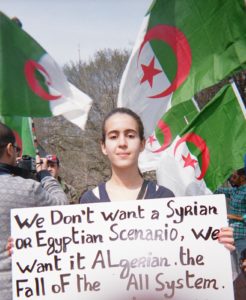 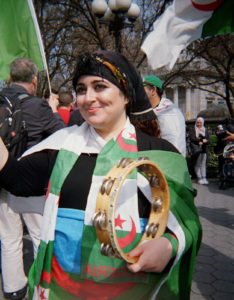 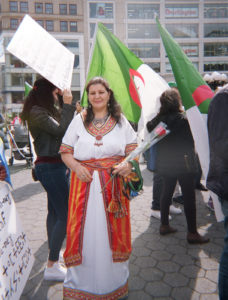