His Brooklyn Museum exhibition ‘Future Fashion’ opens on the 50th anniversary of the first moon landing.

It’s no coincidence that Pierre Cardin’s Future Fashion exhibition—on view at the Brooklyn Museum through January 5, 2020—opens the same day as the 50th anniversary of the Apollo 11 moon landing. The 97-year-old fashion designer was ahead of his time when he created the “Cosmocorps” collection in 1964. The fashion-forward line broke all the rules of the era, forgoing the prim-and-proper look of the previous decade. Bodysuits, jumpsuits, and unitards replaced stiff, white, collared shirts as primary layers; worn beneath vests and skirts, accessorized with codpieces, jewelry, or asymmetrical zippers. The color was bold, the shapes graphic and geometric—Cardin’s vision of what people would wear when they could finally travel to outer space. They were inspired by scenes he watched on television, and in films like Georges Mélié’s groundbreaking 1902 sci-fi film Le voyage dans la lune (A Trip to the Moon) and in William Cameron Menzies’s 1936 H.G. Wells adaptation Things to Come.

When people ventured from Earth to outer space, their uniforms had to acclimate to the change in atmosphere. ILC Dover created the A7L; making it loose, white-and-silver, equipped with a bulky backpack to hold the equipment necessary for breathing and ventilation, and completed with a large domed glass helmet. The uniform would become NASA’s most iconic when Neil Armstrong and Buzz Aldrin first walked on the moon on July 16, 1969. Cardin actually traveled to NASA headquarters in Houston that October for an inspiration trip, becoming the only civilian to wear the Apollo 11 pressure suit. Cardin’s space-inspired designs took a more scientific approach following the visit, becoming more influenced by reality than fantasy. 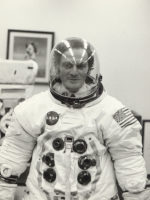 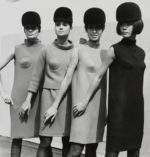 Matthew Yokobosky, senior curator of fashion and material culture at the Brooklyn Museum, noted that Cardin had a different perspective from the fashion designers of his time, who often looked at foreign cultures for inspiration. “He was looking for new inspiration,” said Yokobosky. “He was looking at science, and he was looking at the space race. He was very much interested in computer design, so he did the computer coat, with fins in the back. His interest in investigation was much different from other fashion designers, and it resulted in a much more unique design approach.”

Cardin’s futuristic aesthetic became synonymous with the style of the time. Fashionable men like Truman Capote, Salvador Dalí, Alain Delon, and Rudi Gernreich all wore Cardin’s “Cosmocorps” suits, and his illuminated ones with flashing lights even made a cameo on Jane Jetson in a 1963 episode of The Jetsons. In 1965 Cardin worked with a milliner to fashion velvet and fur hats after space helmets. As the television series Star Trek envisioned an inclusive intergalactic world in 1966, it dressed its characters in body-hugging uniforms that resembled Cardin’s otherworldly creations. The designer embellished his eveningwear with rhinestones, sequins, and crystals, famously saying, “I prefer to imagine an evening dress for a world that does not exist yet. I imagined dresses made of crystals and flashing lights.”

The Brooklyn Museum exhibition even shows Cardin’s visions of the future after 2010, which features a magenta neoprene minidress with rays darting out from the chest, red vinyl pants, and a silver cocktail dress with a “Parabolic” hem, suggesting a shift from when he first started designing for the future in the ‘50s. “Back in the ‘50s and ‘60s, there were all these male scientists that were designing rocket ships,” said Yokobosky. “And today we have the young women from Stanford that are 23, 24 years old, and they’re designing the rockets that are going to the moon, so we’ve had a big cultural shift in the past 50 years.”

To this day, the 97-year-old’s fascination with outer space and the future remains strong, and Cardin still goes to the office daily to dream up spacewear for the future. “In 2069 we will all walk on the moon or Mars wearing my ‘Cosmocorps’ ensembles,” he said. “Women will wear Plexiglas cloche hats and tube clothing, men will wear elliptical pants and kinetic tunics.” 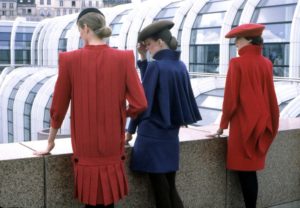 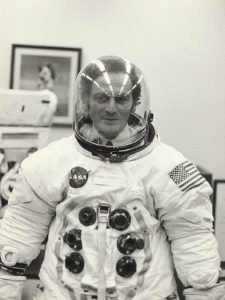 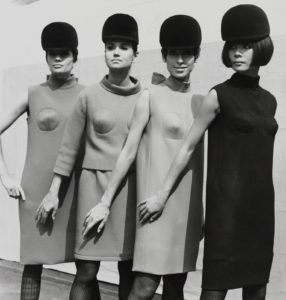 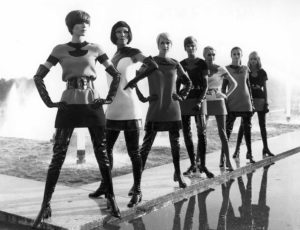 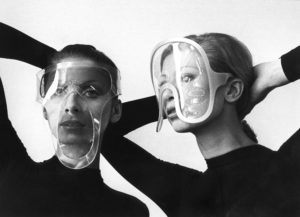