It’s a hot, bright summer afternoon in Amagansett Square—a grassy knoll behind the Hamptons town’s Main Street, where boho mommy chic boutiques like Ulla Johnson intermingle with a natural skincare apothecary purveying serums, dry brushes, and jade rollers. There is a yoga studio too, that Paul McCartney is rumored to frequent, with a book selection that features the writings of presidential hopeful and Oprah’s spiritual advisor, Marianne Williamson. Something is palpably in the air here- it might be the palo santo, but could I be at the frontier of luxury wellness?

I catch artist Ilana Harris-Babou post-yoga, eating dosas with artist Virginia Lee Montgomery. I wonder if she is in deep cover, or just living her life. I assumed it’s a bit of both. Harris-Babou explains that she and Montgomery are doing a summer residency nearby, and extends an invitation to stop by.

It wouldn’t be far off to call the Brooklyn-born, multi-disciplinary artist a cultural anthropologist of sorts. After all, her art practice requires experiential research through fieldwork. The first time we met, Harris-Babou made me her emissary as we infiltrated Restoration Hardware’s flagship in New York. The artist used the ritzy furniture store (or ‘gallery’ as the company self-identifies), as source material for a video featured in this year’s Whitney Biennial. The film, Human Design even begins in Restoration Hardware. “I got obsessed with the African wood carving that I saw in there,” Harris-Babou said, “When I asked a salesperson about them, I was told: ‘we send team members out across the globe to find these one-of-a-kind objects.’” The masks, Harris-Babou incredulously explains, weren’t even for sale, but represent the desire to curate a neat aesthetic world, filtered through a gaze of white modernity, where difference is often something brought in for cultural cache. In Human Design, Harris-Babou dons a wide brim hat and transforms into a design explorer traveling through Senegal. Her character seeks and uncovers ‘exotic’ objects. The piece is bitingly funny—the artist has spoken about employing humor as a Trojan Horse to get to deeper and more painful subject matter.

Harris-Babou is fascinated by the aspirational narratives we tell ourselves. The Hamptons is a playground for the artist, where these fantasies play out in real time. When I arrive at the artfully undone garage that Harris-Babou uses as a studio space during her residency at home of Crush Curatorial gallerist Karen Hesse Flatow, I have the distinct feeling of stepping into a Ralph Lauren advertisement. In the garage, is a long table full of miniature sculptures, and the walls are covered in collage inspired by Harris-Babou’s experiences of moving through this Hamptons tourist lifestyle. “I feel like I’ve been doing really embodied research of wellness culture,” the artist jokes, “by putting on face creams in a stores in Amagansett Square and going to exercise classes.”

Harris-Babou attended the Hamptons pop-up of The Class—Taryn Toomey’s cult workout experience that encourages emotional catharsis. It was followed by a “Wild Rose Brunch,” where a selection of vegetables and tonics were served alongside a day of activities. Harris-Babou made her own floral arrangement using only locally grown flowers, and sat through workshops hosted by a skincare expert from Weleda, explaining how to touch your face. Toomey herself spoke about the necessity of expelling the toxins within using a tone Harris-Babou described as surprisingly dark— “There was this sincere need to let go in this perfectist femme space,” says Harris-Babou. “Like a valve that needed to be opened.”

The bizarrely enlightening experience gave Harris-Babou a lot of material to work with- “I’ve been thinking about this obsession with natural materials and buying local, so I’ve been casting soaps shaped like Yoni eggs or face rollers, but also filling the soap moulds with the local Hamptons flowers and sand. I’ve been thinking about how these objects that I’m making can come full circle—like one day we might be nostalgia for synthetic stuff—like a bar of soap made out of Cheetos.” Amongst the artist’s soap sculptures is indeed a bar filled with highlighter orange Cheeto puffs.

Goop-fueled wellness trends are on the minds of Harris-Babou’s contemporaries- though their work is often more anxious and fatalistic. At MoMA this summer, as part of New Order: Art and Technology in the 21st Century artist Josh Kline takes on the culture of luxury juicing with Skittles: an industrial refrigerator identical to those found in bougie juiceries. Kline’s ‘juices’ list ingredients well beyond kale and spirulina, with the ‘Williamsburg’ tincture contains cut up credit cards, and ‘Condo’ flavor featuring bits of fluorescent purple yoga mats. Harris-Babou understands the cynicism that Kline so darkly and hilariously taps into. She operates from a different vantage point though, perhaps one more generous than we deserve. 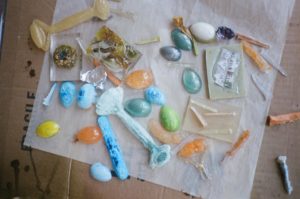 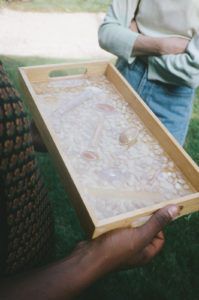