Every year on the first weekend of June, in the sleepy seaside town of Arles in the South of France, photographers, curators, and collectors gather to celebrate the opening of Rencontres d’Arles. The photography festival is a pitstop on the art fair world tour, with multiple blue chip exhibitions and boozy cocktail parties, but there is one event that looks towards new and unseen points of view—Dior Makeup’s Photography Award for Young Talent.

Dior’s committee—this year made up of photographers Dominique Issermann and Sonia Sieff; Simon Baker, the director of the Maison Européenne de la Photographie; Dior Makeup Creative and Image Director Peter Philips; President and Founder of Luma Arles Maja Hoffman; and Claude Martinez, the President and CEO of Christian Dior Parfums—selects 10 exciting new talents from 10 of the world’s top art schools to exhibit in Arles. Artists were asked to submit work around the themes of beauty, femininity and faces, and color. The winner receives a 10,000 euro prize and a creative commission. Last year’s winner went on to have a solo show at MAP in Paris.

“We are not expecting the finished deal as an artist. They’re just starting. So, you are looking for promise, for someone who has an original way of thinking, and also, for work that is technically good,” said Baker the day of the award’s ceremony. “I am nearly 50. I don’t know what a 20-year-old woman from China thinks about identity and women and beauty. So, it’s interesting to think about it from that point of view. That this is the next generation coming up. How are those artists thinking creatively about these ideas?”

This year’s winning artists include a South Korean photographer exploring the relationship between North and South Korea, a Johannesburg-based artist who examines how war affects identity, and a young Japanese creative who shot a playfully irreverent short film, all in one take, portraying the day in the life of a woman her age.

“One thing that struck everybody was that the new generation is entirely women except one,” continued Baker. “If this prize was running 40 years ago, you would probably have one woman and nine men. It’s just a changing generation.”

Below, we spotlight five of our favorite artists from Dior Makeup’s Young Talent prize. 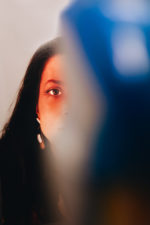 Photography by Elsa Leydier. Authorized for use by Christian Dior Parfums.

When you glance at Elsa Leydier’s photographs, it takes a minute to identify what is obscuring the model’s faces. “It is a plastic bag,” said Leydier, whose work deals largely with breaking down perceptions of places—the postcard image versus what you see when you actually live in a city. “For this work, when we heard that the theme was femininity, beauty, and color, I really thought, what is femininity and beauty in our society? And femininity and beauty for me were something that you can buy,” said Leydier. “I placed the plastic bags between my lens and my models. I wanted to show that those plastic bags are a symbol of the conceptions of society. Part of what makes them beautiful: they look like accessories, but at the same time they mask [the models]. I like paradoxes.”

Leydier, who studied at ENSP in Arles and now lives in Rio, says she doesn’t criticize the system that we live in. “Because I am a part of it,” she said. That said, “nothing can be told from one point of view.”

Photography by Ana Pinto. Authorized for use by Christian Dior Parfums.

Ana Pinto’s rich, moody images are cinematic: They could be from the 1940s or ‘50s, they could be pulled from a film, and there is something dramatic about them, even when she portrays a woman simply flipping her hair or glancing at the camera. The London-based artist is interested in exploring the relationship between technology and personal happiness. She says her photos for Dior are a mini-series within this ongoing project. “I’m thinking about what [technology] can do for us—what its purpose is to help us. I really think that we get close to it and I really think it’s supposed to make us feel happier,” said Pinto.

Pinto’s interest in photography wasn’t immediate. “I started photographing years after my BA, when I was living in China,” she said. “I think China is experiencing such tremendous development and you can really see it. Everything changes every day, and the past and the future are always overlapping. The country did something to me and I started having all these ideas.” 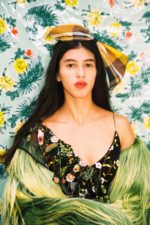 Photography by Ana Blumenkron. Authorized for use by Christian Dior Parfums.

Growing up and shooting film photography in and around Mexico City, Ana Blumenkron never considered herself to be a fashion or a beauty photographer. “I always feel that I’m a journalist,” reflected Blumenkron in front of her colorful, brightly feminine portraits.

The portfolio Blumenkron submitted reflects this subtle and psychologically sensitive approach to photojournalism. Her model, Fernanda Alverez, cast from a local agency which books only indigenous Mexican women, stands behind typical plastic tablecloths—the ones found on in “really cheap restaurants through the whole city and mostly through the whole country,” says Blumenkron. In one image, Alverez appears strong, almost militant; in another deeply playful; more vulnerable in yet another; and intrigued, almost seductive, in a fourth.

“I think the most the most important thing in my pictures is the backdrop—and that’s an unusual thing in beauty photography or fashion photography,” mused Blumenkron. “I wanted to represent the backdrop through the fashion, through the makeup and through the character. So, I started to build up these different personas. We’re not only single things. Sometimes, we have to be soldiers. And sometimes we have to be really sweet. Sometimes, we are playful. I think that all those things live within every woman.” 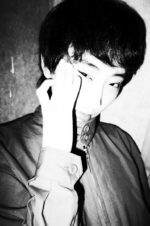 Photography by Yurina Okada. Authorized for use by Christian Dior Parfums.

Speaking through her teacher and translator, Japanese photographer Yurina Okada explained that her work—striking, intimate black and white photos of women she knows deeply—is meant to show the sides you don’t often see of women. It is by a woman, and about women. “I want my work to be direct,” she explained. “I only use friends for models, and I take a lot of time to talk to them every time I shoot. I still feel as though there are questions unanswered [about these women]. I want to change the perception of what a model is. They are the creators.”

That her work involved no color didn’t matter to the committee. “It was just so good,” said Baker. “And she is very humble. She’s very, very surprised that anyone would think it was good.”

Photography by Magdalena J. Wiitchen. Authorized for use by Christian Dior Parfums.

When Magdalena Wiitchen immigrated from Poland to the UK, she began life on her own. “I pretty much lived by myself since I was 15,” explained the artist. “And it was hard, of course, but I grew up very quickly.” Now a recent MA graduate of London’s Royal College of Art, Wiitchen examines the ways in which people move through, and walk unexamined through, the streets.

“I use photography kind of against itself,” said the artist in Arles. “I shoot in a low light situation. I also shoot outside on the streets at night or after the sun goes down. I don’t use models. I’ve tried. I want to photograph people who don’t know that I’m photographing them. I focus on a color, on a movement, on the dynamics of the street, and on this idea that in any outside setting, people really focus on getting from A to B. We all kind of get very isolated.”

The result is distant, but striking, bringing about the emotions of disconnect and loneliness within the viewer. “I think I’m not finished with the urban and the street and with the strangers,” said Wiitchen. 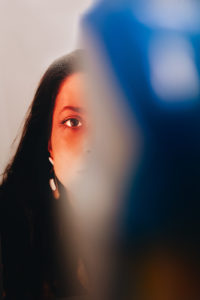 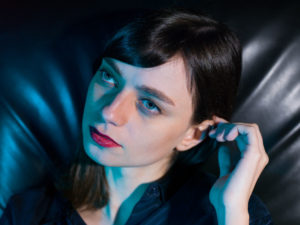 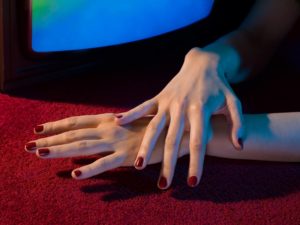 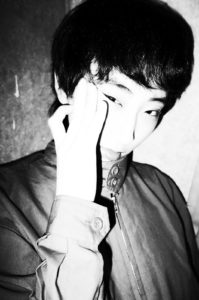 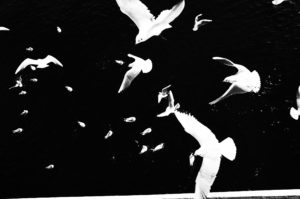 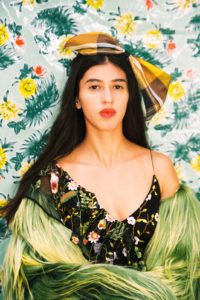 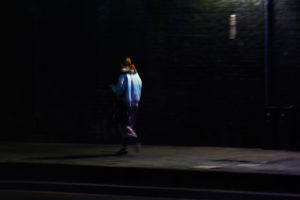