Austria just got its first female chancellor—Here's how The Viennese Democratic Women's Association laid the groundwork.

A scandal has plagued Austria over the last few weeks, involving vice-chancellor Heinz-Christian Strache, whose secret meeting with the supposed daughter of a Russian Oligarch was taped. During the meeting, Strache offered the woman political favors in exchange for money. Sebastian Kurz, Austria’s 32-year-old wunderkind chancellor, was ousted by parliament in a no-confidence vote, and Brigitte Bierlein, Austria’s first female chancellor, was sworn in on June 3. For now, Bierlien’s term is temporary, until elections take place in September.

Bierlien’s appointment signals a win for women in the small European nation of 8.77 million people, but over a century ago things were very different. In 1848 the region, then known as the Austrian Empire, saw a series of revolutions that sought independence for the Germans, Hungarians, Slovenes, Poles, Czechs, Slovaks, Ruthenians, Romanians, Croats, Venetians, and Serbs. On August 21, 1848 a large reduction in women’s salaries in the public sector spawned protests that ended with 18 people dying and 282 injured. Karoline von Perin-Gradenstein, who lived in Vienna, the capital, got fed up with the fact that women earned lower wages than men, didn’t have the right to vote, and didn’t have access to equal education. The Viennese Democratic Women’s Association (Wiener demokratische Frauenverein)was founded a week later on August 28, 1848, to protest for women’s rights. Von Perin-Gradenstein would become its president, helping pave the way for Bierlien.

The Viennese Democratic Women’s Association is having a moment in the spotlight once again thanks to Chilean artist Voluspa Jarpa, who spotlighted the women’s political organization in the Chile Pavilion at this year’s Venice Biennale, which is on view through November 24, 2019. Jarpa created the Hegemonic Museum, which seeks to explore various examples of hegemony and “leadership or dominance, especially by one country or social group over others” through the lens of art. Jarpa focused on European males’ need for dominance, including the exhibiting of tribal people like zoo animals at world fairs, the CIA being in cahoots with the United Fruit Company to overthrow governments, or the case of the Viennese Democratic Women’s Association. Jarpa explained the idea of white male hegemony: “There’s a tendency for classification,” she said. “It doesn’t acknowledge other ways of thinking, and it has the tendency to want everything to be the same.”

“Vienna, for example—there is the case about the democratic political party by women in Vienna where women tried to create a political party and it was forbidden for them,” said Jarpa. October 17, 1848 saw a demonstration organized by the Viennese Democratic Women’s Association, which also brought a petition with 1,000 signatures that demanded fair labor rights, more equality, and the right to an education. Men turned their noses at the demonstration, making a mockery of the movement through humiliating cartoons that depicted offensive sexual images and other scenes of submission. Jarpa turned these images into a series of five lightbox dioramas.

The Viennese Democratic Women’s Association only lasted a little under two decades until 1867, when the Law on Assembly and Association was passed. Women were banned from political participation for the most part, unless it concerned charitable and children’s associations. Men celebrated and sneered. But that’s not to say that no progress followed; the Imperial Elementary School Law of 1869 allowed girls to attend school at a secondary level. Subsequently, the first girls’ elementary schools sprouted in 1892, and five years later in 1897, the first women were allowed to enroll in the University of Vienna. Women’s suffrage, however, didn’t occur until more than two decades later in 1918, when women finally won their right to vote. If only Karoline von Perin-Gradenstein could basque in the glory of Brigitte Bierlein’s appointment now. 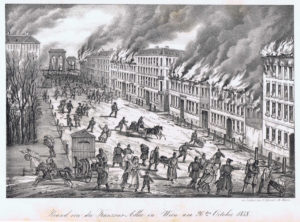 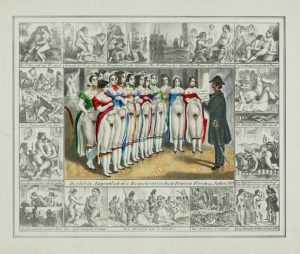