Skengdo, AM, and Drillminister pair up with artist Andrei Molodkin to take on Britain's political establishment.

Drill artists Skengdo and Drillminister have been at the forefront of a censorship row that’s been brewing in the UK since Skengdo and his music partner AM were handed an injunction last year, prohibiting them from performing lyrics which called out rival gang members. Now the artists have teamed up with the Russian artist Andrei Molodkin to spread their message further.

On Friday, against a backdrop of blood pumping through lyrics from banned or censored works, Drillminister, Skengdo, and AM premiered a new video for “The Media” at a charity event hosted by London’s Saatchi Gallery. The event raised money for Brixton Wings, an organization helping young people from disadvantaged backgrounds forge careers in music. The artwork by Molodkin, who also directed the video, takes blood donated by volunteers and pumps it through 3D sculptures of censored lyrics, before projecting the dispersed bodily fluid on a wall behind.

It’s an unlikely meeting of minds; Drillminister and Skengdo grew up in London before making uncomfortable music about the violent reality of life in the capital, while Molodkin spent his formative years in north-western Russia before serving in the Soviet army, going on to make controversial art about conflict using oil and blood. When Skengdo’s manager floated the idea of a collaboration with Molodkin, the rapper was initially wary of working with a Russian artist famed for his use of cells and plasma. “The first thing I thought was [about] sacrifice,” Skengdo laughs. “And then I thought, ‘Nobody’s done this before.’ I was excited to do it.” Drillminister had a similar reaction. “To be honest, I was thinking, ‘What? Is this guy a vampire or something? Are they going to clone me in Russia?’ But then I realized, ‘Nah, this guy is, like, the Banksy of Russia,’” he explained, adding that it was the power of the project that made him excited. “Taking it to the extreme to get a reaction and make a change is what I’m all about.”

Drillminister, who is running for Mayor of London in 2020, explained how Molodkin first came across drill’s battle with UK police after a segment aired on Russia Today (RT). “He saw me on RT doing an interview and speaking out on certain things that I felt passionate about and that kind of went viral,” Drillminister recalled. “He said it was a massive interview in Russia, like, a lot of people in Russia have seen that interview.” Molodkin confirmed that he learned of the drill debate from the Russian television network, then by reading The Guardian and watching videos on YouTube. “The music is not glamorous,” Molodkin said. “They rap about real life and their surroundings. It’s a window into a part of society that should be taken seriously and understood.” When asked what he made of the rappers’ first visit to his studio in Paris, Molodkin was quick to sing their praises: “They are intelligent guys and are working on similar things as I am, both in different worlds.”

Despite Russia having its own internal issues with rap artists—last December, Putin said the government should take control of the genre and its influence on young people, after the rapper Husky was arrested for performing on the roof of a car and jailed for 12 days—Molodkin hinted that Russia feels more positively about drill music potentially disrupting the UK’s political landscape. “Putin would be very happy if Drillminister became London Mayor in 2020. The communication would be much easier than it is [with London’s current Mayor Sadiq Khan],” Molodkin revealed, before suggesting, perhaps jokingly, a potential campaign collaboration between Drillminister and the Russian president: “Drilly has his London Mayor campaign coming up—blood and oil can help [him] get votes.”

Asked about his own plans for making political waves, Skengdo just laughed: “I’ll leave that to Drillminister.”

The partnership isn’t a political crusade—it’s about shining a light on censorship’s heavy hand. “We’re bringing the installation to London, and drill is the most contemporary example of how the UK government is censoring a certain section of youth culture,” Molodkin clarified. Skengdo, who never wanted to become a political figure, has found himself fighting for freedom of speech through circumstance: “We’re talking about real life things and what’s actually happening in the world,” he told me. “We’re letting people know our problems and voicing [them], and now we’re being silenced for that. Yeah, there are crimes and there are problems, but to say they we’re [Skengdo and AM] doing that single-handedly, that’s a joke.” His main objective is to raise awareness. “I want people not to be scared or feel threatened. I want them to have that freedom of speech, because that’s what’s being taken away from us young people right now.”

Skengdo explained how drill music has changed his own life: “We’re trying to make something of our lives, and you can see it happening. People going on holidays, people moving their mums into different houses—all from drill. What drill music has done for me personally is crazy.” 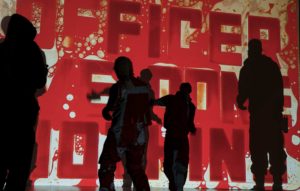