“Good Milanos used to say, politics is like entertainment, but for ugly people,” said artist Francesco Vezzoli at the MAXXI Museum in Rome during a conversation with British architect and curator Joseph Grima at the IST. FEST. ROME Arts and Culture Festival. The first edition of the weekend-long IST. Festival, founded by creative director Demet Müftüoğlu Eseli and filmmaker Alphan Eseli, was held outside of Istanbul in collaboration with Delfina Delettrez Fendi and artist Nico Vascellari. The Italian offshoot began with a cocktail at the Turkish Embassy in Rome, saw a lavish gala dinner at the storied Villa Borghese, and ended with a day in the country and an al fresco performance by Arto Lindsey at I Casali del Pino.

Vezzoli and Grima were at IST. FEST. ROME to discuss Vezzoli’s current exhibition, Party Politics, at the Fondazione Giuliani in Rome through July 19, and the theme of the festival: Self-Expression in the Post-Truth World. “It was an interesting chance to study, and to try to explore, the rules of the entanglement between politics and entertainment,” said Vezzoli. For the exhibition, the artist culled together a selection of photographs of politicians with celebrities, producing them large scale and placing them in ornate frames. He had asked an employee of one of Italy’s largest photo agencies to find as many photos of Italian politicians with celebrities as he could.

Party Politics features a number of politicians and celebrities. There’s a 1986 Getty photograph from by Vittoriano Rastelli of Joan Collins at the height of her Dynasty era, in all her big-haired, glamorous ՚80s glory, standing alongside former Italian prime minister Silvio Berlusconi. In another photo from the ՚80s, the frail, pail, and bald Italian communist politician Giancarlo Pajetta gives a beaming Sophia Loren a peck on the cheek. Former United States First Lady Nancy Reagan; Italian socialite Marella Agnelli; and Maria Pia Fanfani, humanitarian and the wife of former Italian prime minister Amintore Fanfani sit at a corner table together smiling in another image. Vezzoli also looks at celebrities turned politicians with a photo of Ilona “Cicciolina” Staller, a porn star and singer who served in the Italian parliament from 1981 to 1991. 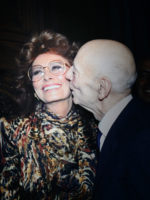 Vezzoli had interesting commentary about the blurred line between politics and entertainment. “If the politician becomes too much of an entertainer at some point, he will lose his credibility, whether the artist is criticizing him or not,” said the artist, who continued, “This was my little gift for Roma, and I guess it fits the post-truth or pre-lie topic that we discussed in this symposium.” 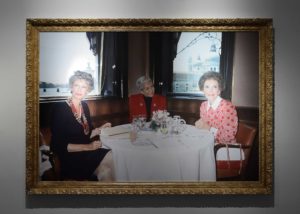 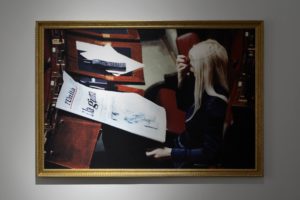 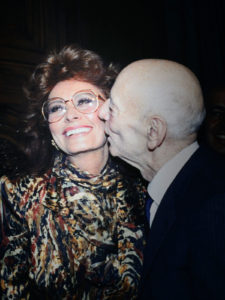