Barbara Wagner and Benjamin de Burca bring Swingueira to an international stage at the Venice Biennale.

Swingueira—the Brazilian music genre and dance form that’s a tinge of twerk mixed with a dash of hip hop and an injection of samba—recently made its international art world debut at the Venice Biennale. Artists Barbara Wagner and Benjamin de Burca presented Swingueira at the Brazilian Pavilion through a series of stills and a two-channel video piece titled Swinguerra, which is on view through November 24. Wagner and De Burca changed the spelling of Swingueira to Swinguerra, “guerra” being the Portuguese word meaning war. The artists did extensive research, working collaboratively for a period of three years with three dance groups: Cia. Extremo, Grupo La Mafia, and Bonde do Passinho/As do Passinho S.A. to show three distinct dance styles that hail from the periphery of Recife: swingueira, brega funk, and passinho de maloca. The groups work together to choreograph routines, which are often performed in dance competitions. The film serves as a portrait of contemporary Brazilian culture, touching on topics like identity, conflict, race, and gender. The dancers, the majority of whom are black, often use dance as a form of escape and empowerment. Document spoke to the De Burca about the project.

Benjamin de Burca—We discovered Swingueira in 2014 while researching dance forms as a cultural expression specific to the Northeast of Brazil, and in particular, from the State of Pernambuco where we are based. Our research at the time was for our first film called Faz que vai, which was about Frevo, a music and dance from Pernambuco borne from Capoeira and intrinsic to the Brazilian expression of Carnival. We went to our first dance competition of Swingueira to meet Bhrunno Henrique, who then introduced us to Eduarda Lemos, who is the main dancer of Swinguerra. Both took part in our first film as dancers who traverse freely the worlds of Frevo, Quadrilha, and Swingueira.

Ann—How would you describe it to somebody who doesn’t know what it is?

Benjamin—Swingueira is both the name of a music, also known as Pagode Baiano—Pagode from the state of Bahia—and a dance expression. Although the music and dance originated from Bahia, it has come to take on a different, higher octane style in Pernambuco, and its contemporary expression is often infused with elements influenced by global pop,or at least North American,styles. In the state of Pernambuco it is an expression mainly performed by groups of up to 60 plus young people, ranging between 15 and 24, who perform synchronized choreographies for a jury in annual competitions.

Ann—What are the sociopolitical aspects of the dance?

Benjamin—As an expression that differs from its origins in Bahia, in Recife—as a competitive enterprise—it takes on elements from Quadrilha [a large synchronised dance group] and varying formations based on binary formats between male and female dancers. These aspects of binary definitions are complex and often interchangeable—’male’ and ‘female’ roles with non-binary or transgender variations.

Secondly, also taking elements from the Samba schools in Rio, the competition of Swingueira in Recife has become thematic in presentation. The groups must present in writing the theme they will present before they dance. These themes are strongly socio-political and are centered around economic urgencies, complexities of daily life, social acceptance, and the vanquishing of prejudices as an expression for a better future. The dance presentations by groups who enter the competition are 15 minutes long and performed in three acts, judged for expertise, choice of music, expression, imagination, synchronicity, presentation—[including] banners and costumes—and, in general, how urgent and how well they express the themes they brought to the competition.

Ann—What types of backgrounds did the dancers come from?

Benjamin—The dancers in the film Swinguerra are from areas surrounding the city of Recife. Recife, which is a sprawling city of around four million people, allows for many types of ambients, in terms of neighborhoods. And though the dancers in the film come from many peripheral neighborhoods, already predetermining a class divided from ‘the centre,’ the culture surrounding dance and music in Brazil is mainly connected to the peripheries. Therefore when it comes to the most potent forms of cultural expression in Brazil, the periphery is the center.

Ann—What was it like working with the dancers for three years?

Benjamin—We researched swingueira groups since 2014, and followed Bhrunno and Eduarda through the different groups and competitions they took part in. Long before being invited to represent Brazil in Venice, we were planning to shoot something that would resemble a West Side Story in Recife, with different groups disputing visibility in the city. Many of the dancers who appear in this specific project we had known before, sometimes having encountered them in other previous groups. Together with them we started a very intensive casting in the beginning of November 2018, following the invitation to participate in the Biennale, which led us to work with the groups Extremo, La Mafia, and Passinho do Maloca, and their respective dance projects. It’s serendipity that we ended up making this work into the national representation in Venice, at this very moment in Brazil.

Ann—How did they pick their costumes?

Benjamin—For the swingueira group Extremo, they were practicing their choreography for a competition that took place in April. Since we filmed at the end of February, and [were] working with a cinema costume designer, the group decided on a costume that we would make for the film but that they would continue to use for their competitive presentation. It was crucial to us that how they are in the film is exactly how they wish to be seen in their presentations.

Benjamin—Recently the president-elect vetoed an advert about to go live, by the state-owned ‘Banco do Brasil.’ The TV advert [for a Brazilian bank] not only showed various groupings of people of color—for balance, in this categorization I include ‘white people’ here—having a good time together, since they presumably opened their own accounts and became economically viable members of society. There are some scenes which may be considered gender fluid, such as a fabulous-looking woman making a selfie, or checking her account, with a glitzy club background. This advert is no different from any North American ad for, say, Pepsi. Though it was quite banal, it was enough to contravene the conservative, right wing, supposedly family-oriented patriarchal agenda afoot in Brazil. The marketing director of the bank was even fired. Cases of violence against LGBT+ communities have spiked. Especially bad is violence against trans women. An allowance for intolerance and violence against these groups and women is coming straight from the highest powers of office, where misogyny, homophobia, transphobia, and even aporophobia—phobia of poverty and poor people—are not only the norm but are being encouraged through deeply corrupt and backward governance.

Ann—How does Swingueira serve as an escape for the dancers?

Benjamin—When the dancers have to spend up to three hours to make it to rehearsal, three times a week, you know that it is something urgent for them to do, and to be part of. It’s about identifying your place among others, community building, and about feeling safe, being respected, and after all that, it’s about having fun and being happy—an escape. In this sense it’s an escape from daily tribulations, dangers, precarity, and the opposite of why they travel so far, and show such extreme discipline to be part of the dance groups.

Ann—What do you hope people get out of seeing the exhibition?

Benjamin—Although the film is in a loop, its ‘beginning’ shows the main dancer, Eduarda Lemos, entering with her tank top declaring ‘Love love love’ along the bottom of the hem. We would like people to see their prejudices as socially conditioned and to begin dismantling the need to define themselves by what they are against, rather than learn how to love, admire, or at least respect all differences that make no direct threat to their personal well being. The film can be enjoyed for the professionalism of the dancers too, which is spectacular. 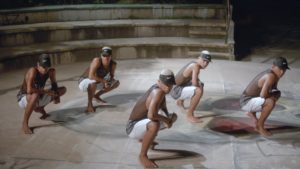