With his debut album “Nothing Great About Britain,” the rapper blends punk anarchy with the purity of Daniel Johnston.

“I’m fed up of politics,” British rapper Tyron Frampton, a.k.a. slowthai, tells me. It’s just over 48 hours until his debut album, Nothing Great About Britain, is released, and the 24-year-old has clearly been questioned about the title hundreds, if not thousands, of times. Still, he doesn’t resent the inquiry. “I think when you’re this outspoken you kind of have to explain yourself.”

Nothing Great About Britain (co-produced by co-produced by Kwes, who in the past has worked with Solange and Damian Albarn) is a burning portrait of a divided nation, gripped by Brexit and populism. It’s an eclectic record; incorporating the drive of punk, the menacing basslines of grime, and the sharp beats of ‘90s garage. Slow piano riffs morph into sharp samples, varnished with lyrics about skin tone, parental wisdom, boring ringtones, and social ills. Trying to get slowthai to label his sound is impossible—he prefers to describe the album as a “vibe,” a “headspace,” and “a blend,” adding that some people have confused it with a compilation, but it’s very much a “full body” of work.

The album art certainly speaks volumes. It shows slowthai with his head in wooden stocks—the backdrop a council estate—wearing nothing more than his signature cheeky grimace. On the first track, he calls the Queen of England a cunt, mimics an upper-class Englishman accent bordering on a Dick Van Dyke impersonation, and references the far-right group English Defense League.

Shirt and Shorts by Versace, Hat by Valentino.

Still, despite this brash and boisterous take on national identity, slowthai is adamant he isn’t in the game of stoking political fires. “I don’t really read into [politics] too much,” he tells me. “It’s something people need to pay more attention to, but at the same time, [it can’t] be their main fear.” When asked what might make Britain great, he cites individuals and families, so I wonder how he would define the country as if it was a person. “It would be loud and obnoxious but at the same time charming and, like, sarcastic, and not too witty,” he suggests. I can’t help but think he’s describing himself. “Hell yeah,” he confirms, “I’m a bit cocky like that.”

slowthai’s stage name comes from playground teases—other kids thinking he was slow, and pointing out his mixed heritage. On Instagram, he shouts at strangers to buy his new album and stuffs his grill-adorned mouth with cigarettes, but in reality, the rapper’s swagger is just shy of arrogance. Despite being named one to watch time and time again—earlier this year, the BBC named called him “the sound of 2019”—slowthai doesn’t seem too invested in the hype. His sell-out shows are known for their raw chaotic energy, a vibrancy he puts down, believably, to anxious energy. “I just want it done now,” he mockingly whines in anticipation of the album release date.

Growing up in Northampton surrounded by what he calls “certain people” expecting him to live up to “certain stereotypes,” slowthai didn’t always feel like he could be himself. “Going to hardcore shows and grubby-as-shit venues,” the rapper recounts of his teenage years. He reels off big British names from Dizzie Rascal to the Rolling Stones as influences, but his biggest icon still comes as a surprise. “I really like Daniel Johnston,” he says. “I just stumbled across him and his whole way of being just interested me. I just like the way he writes and songs. I don’t know, it just drew me to him; the way he re-recorded his first project thousands of times just so you can give out tapes to different people, and he hand drew all the covers—he’s, like, a true artist. He doesn’t do it for nothing else but his love of music.”

slowthai, too, has his art and his fans in the forefront of his mind. For his recent 99p Tour, he asked people to suggest venues. “I hate when we pre-plan a tour and then people just say, ‘I wish you’d come here,’” he explains. “Because I’ve lived in a place where no one ever goes, so I thought, ‘How can I give people something they want?’”

That place where he says no one wanted to go is his own hometown of Northampton. “It’s a small place,” he says when asked to describe it. “There’s not much going on. It’s a lot more close-minded than most places. It’s very grey and, I don’t know, you have to see it to believe it.” 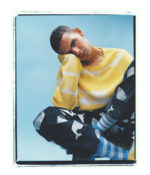 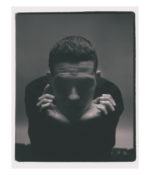 Left: Sweater by MSGM, Pants and socks by Thom Browne. Right: Jacket and Pants by Valentino.

At the moment, he’s living between there and London, but in the long term he sees himself settling down in his hometown. “I’ll stay where I am,” he insists. “I basically want to buy mad land and build on it and have all my family and everyone, so we have our own little hideaway.”

Family is clearly incredibly important. Previously, slowthai has spoken about how he was raised by his single mother after his dad walked out when he was three years old. The day we speak, it’s his mom’s birthday. At one point, our interview gets cut off as she leaves the house for dinner; in the background I can hear slowthai calling out, “Love you,” as she leaves. Mom may well be among the most grateful for slowthai’s chosen form of catharsis. “I used to be so angry because I felt certain ways,” he says, “but when I found my release, now I can just lay it out—then I’m calm.” 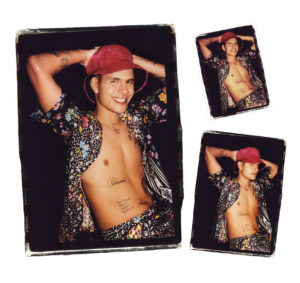 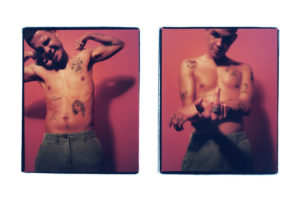 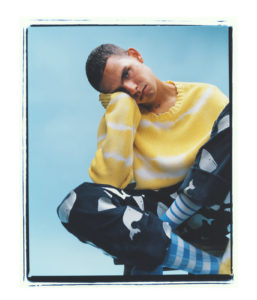 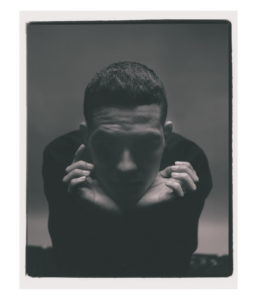