In 1989 four black men and one hispanic man—Raymond Santana, Kevin Richardson, Antron McCray, Yusef Salaam, and Korey Wise—from Harlem were accused of assaulting and raping a white female jogger named Trisha Meili in Central Park. The case became a media sensation, where Donald Trump took out an ad in four New York dailies calling for the state to bring back the death penalty. In 1989, New York City was rife with crime, and there were a lot fewer news sources for the public to get information from. Newspapers, magazines, and television dominated, and there certainly weren’t social media platforms like Twitter and Instagram to serve as public forums for debate. So from the beginning, the case of the Central Park Five was at an unfair disadvantage. The following year, a guilty verdict was ruled, and the innocent men were sentenced to five to 15 years in jail. It wasn’t until 2002 that Matias Reyes, an imprisoned rapist and murderer, confessed to the crime, and DNA evidence backed his claim, leading to the conviction of the five men to be vacated in 2002. The men sued the city in 2002, but it would take more than a decade for them to be awarded $41 million (in 2014).

Ava DuVernay’s latest film, When They See Us, which debuts on May 31 on Netflix, traces the harrowing experience of The Central Park Five through a four-part series told from the perspective of the men and their families. On April 26, DuVernay participated in a talk with professor and filmmaker Henry Louis Gates Jr. at Harvard for Sarah Lewis’s Vision & Justice Conference. DuVernay told the audience—which included civil rights lawyer Bryan Stevenson, Malia Obama, and patron Agnes Gund—about the first time she heard about the case, the tweets that moved her to create the film, why she chose to call the series When They See Us, and why she sees the project as a springboard to expose the blatant inequality and racism within the American criminal justice system. Here are the highlights of the conversation:

Ava DuVernay on her first time hearing about the Central Park 5:

“I was 17 and living in LA when it happened, and I remember really clearly because there was a slang term being used that I was watching on television and I didn’t know. So I called my cousin in New York, like, ‘What’s wilding? Why am I noticing this?’ And he said, ‘It’s not a word, I think they mean wilding. Like wilding out?’ And I’m like, ‘Wilin’ out, like hanging out?’ And he said, ‘I don’t know what wilding is, none of us know what wilding is.’ So it really crystallized for me there was a possibility that the news could be wrong. Dan Rather saying that word ‘wilding’ connected to wolf packs, to animals, criminals, and these boys—I kept watching these images, and I thought, God, if they got wilding wrong, maybe they got the rest wrong.”

On the genesis of “When They See Us”:

“I went online as people do. And I followed an account called The Central Park 5, which was run by one of the guys, and it was already following me. I started this online correspondence with one of the men, Raymond Santana, who a couple months later tweeted me and said, ‘What will your next movie be? Central Park 5?’ I started this exchange with Raymond Santana, and eventually found myself flying out to New York, sitting with him, meeting the men, sitting with their families, delving into their story, researching the story. Next thing you know, I’m writing the story. I’m casting the story, I’m growing the story, I’m location scouting…Raymond Santana called me, and said, ‘What are you doing?’ And I said, ‘What do you think? Your story!’ It really just snowballed. I don’t remember having that decision, like, ‘I’m going to tell the story.’”

On why “When They See Us” is the most difficult film she’s ever made:

“Before this, I made a film that’s $100 million, A Wrinkle in Time, that has six cast members and costumes and a lot of visual effects. But this was 117 speaking parts, boys that were supposed to be 14, 16—finding these unknown boys, a national search for the boys, multiple actors playing one character. I needed an actor when the man was a boy and then when he was an adult, managing all the families. I had a little bit of experience on Selma working with the real life families of people we were portraying, but this was a step deeper. Every man had his own story and his family story and his community story… everyone is a real person that has to be considered. It’s a four-hour film and and keeping all of that in order, with a cast that large and subject matter that muscular, and that horrifying… I thought several times, ‘Oh my goodness, why am I doing this?’”

Still from When They See Us. Courtesy of Netflix.

On why “When They See Us” is a story of love and triumph:

“It’s a love story. And it’s a triumph story. When you get to the end of the story, unbelievable things happen. People only know the story of the lies that were told, and their guilt. But the 15 years of what happened after that is really the triumph of black people against injustice in this criminal justice system.”

On changing the title from “Central Park 5” to “When They See Us”:

“I changed the name from Central Park 5 completely, it’s called When They See Us, and I wanted to rename it to reprioritize the men, and to prioritize their humanity, and not this political moniker that was given to them or this press phrase that has been thrown out. So it was a bit tough, you know. Netflix, thank you—thank God, there were some people over there who listen. Central Park Five has brand equity, people know, the president says it all the time. That’s all the more reason [not to] follow the fib. I want to talk about talk about renaming it and really trying to take this case and [being] allowed to speak for a broader range of issues that emanate from the criminal justice system.

On why the series is a springboard to highlight the problems with the American justice system:

The piece is not just about this case, this case is a springboard. And it’s designed for each part of the film to delve deeper into the different levers of the criminal justice system. The first part is about police aggression, arrest, interrogation. The second part is about courts, bail, trial. The third part is about post incarceration, juvenile detention. And the fourth part is about adult incarceration. And so by watching this series that focuses on one case, you’ll get the breadth.

On how distribution channels for film have improved access to visibility in recent years:

I say this all the time, but I couldn’t see Straight Outta Compton in Compton, because there’s no movie theater. So power with the freedom to connect is what’s new here. I made a film called Selma. I couldn’t show it in Selma because there’s no movie theaters. And so we look at our black communities around the country that don’t even have a place to meet to directly exhibit work to them. Now, we’re talking about a lack of freedom, lack of access to the image, or lack of reach into communities, in the ways that the film should be presented. And so I think that’s what’s different, we can reach them now.

Tags
Ava DuVernayCriminal JusticeFilmWhen They See Us
Tweet this quote 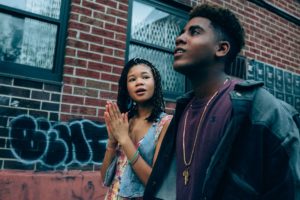