In ‘Still Life With Discontent,’ the South African sculptor draws parallels between bibles and encyclopedias—and exposes America’s own complicated history of Apartheid.

A solo exhibition and monograph debuted this month for South African artist Wim Botha at dual sites in Raleigh Durham, North Carolina. Still Life With Discontent is currently on view at 21c Museum Hotel and the North Carolina Museum of Art. Comprised of drawings, paintings, sculptures, and installation, ideologically, there is a heavy accent on dis-content. Botha is concerned with turning canonical works inside out, a priori for the purposes of exploration and interrogation; to make something new. However, his is also a materials-based process. Particular tropes, the heroic portrait bust, for example, are made often and with encyclopedias, a medium that is both unconventional and symbolically astute. In the catalog, curator Alice Gray Stites notes, “Repetitively interrogating the symbols and sources of religious, cultural, and political power, his works celebrate the anxiety of influence while resisting fixed interpretation.”

Below, we discuss my political reading of his use of those belief systems as they manifest in his work.

Wim Botha—I come to this without any agendas…I don’t have something to put across, so whatever you’re interested in.

Monique Long—I’m not really sure I can say the same, so let’s see how this goes [laughs].  I was really drawn to your drawings; the mark-making gestures of those works. It reminded me a bit of drawings you might find in caves, but I wanted to understand the relationship between those works and your sculpture.

Wim—I’ve never made the connection to compare the drawings to cave drawings. That’s interesting. That’s interesting because, at the time, I was thinking of these materials that are now spontaneous mark-making, spontaneous form. Part of that was…I was really quite close to not making art anymore. I didn’t feel like it had meaning, in a real sense. And then, during a long process, I started wondering, what is it that I am doing? Why do people do this? I thought back to the earliest expressions, and somebody pick[ing] up a piece of charcoal—at some point—and scratch[ing] it against stone and realizing that it left a trace. That it started there, that it was almost irrepressible, in some ways, the desire to leave marks. That helped me a great deal to come out of this academic, theoretical, conceptual vortex and find a way through it that involves fuller expression…in a form that I hope is quite pure.

Monique—At what point did the graphite drawings become part of your process?

Wim—That was around 2008. Those came into being, I think, very shortly before I abandoned the art historical imperative, so to speak. And I’ve returned to that [since]. But, yes, they came as a desire to separate loaded meaning and natural history, basically.  Because it’s devoid of academic interpretation.

Monique—What would you say your primary influences are? Some of it is evident in the work—the Pietas, for example—but there is always a beginning. What were they then and how have they changed?

Wim—As a kid, what was presented to me as an ideal was very much…not just Renaissance, but European high art. It was seen as the purest form of human artistic expression. As a kid, I idolized quite a lot of it, and I think that is partly why I am still working with it. I’m trying to unpack that history that was given to me, and how to make sense of it. Where I live, South Africa, is a very complicated place. In many ways, the US shares a lot of those complications, more than is generally acknowledged. We are a condensed version, almost a test-tube version. For me, it’s what things used to mean and what they now mean that is interesting. But also, in what ways people are negotiating that shift, between what was thought of as fact, what was believed as real truth, and the friction between that and lived experience. For example, [my] use of bibles and encyclopedias, as the two poles. In between them, there is a space for spiritual existence that is not really acknowledged in general texts.

Monique—I’m glad you brought this up—the encyclopedias in particular. Some sentimentalize Encyclopedia Britannica, having it in their home. It harkens back to a time before the internet. We had it in our home–

Wim— –And it was a treasure.

Monique—It was a treasure, something that was showcased. But the underside of that is wholesale indoctrination. This is a set of beliefs that we all believe, you buy into it, invest in it; it’s a part of your hearth and home and you adapt it, subscribe to it, learn from it, study it, refer to it when there are questions, and that’s it. How is it just contained to those volumes? To see you slash it and appropriate it and make it something entirely new—cut it—the violence of it to me was really satisfying.

Monique—For me, even as a child, there was something very alienating about not being able to find everything there, with respect to my own narrative.

Wim—That’s very real. The books were created by certain people based on their certain beliefs.  But they were presented as the universal truths, as the sum of human knowledge at this stage.  Except it’s not…it’s the sum of someone’s knowledge. And it is very satisfying to slash into it, it really is. It is somehow cathartic. I don’t share your narrative experience by default, so I can’t say in that way, but I do have the sense of oppression from what is presented as final truth. Especially when I grew up in a country where that [truth] was manipulated masterfully. A lot of people were directly indoctrinated. There are also a large group of people that were victim to that indoctrination and now have a very difficult psychological process to heal. It’s a complex place.  But in the cutting, in the opening, you find treasures of little snippets or diagrams. The older the books are, the more jarring they are. From a different time, from a different place. You also realize that producing a certain encyclopedia is a vast undertaking. Thousands of people… really, they had the best intentions at the time. There was no–

Wim—No, they really tried their level best. And it was the highlight of their career to be asked to write for the Britannica. It is also important to remember that…that a lot of it is in good faith.

Wim—[laughs]  I think it was. Maybe the editors didn’t always [operate in good faith]…and the publishers…and the powers. That is the important part—the powers are sinister, often. The people that affected those powers are not necessarily sinister, they just add effect.

Monique—It’s interesting to look at it as an archive, though.

Wim—It certainly is. Sometimes I lose days or hours…

Monique—So, you engage with it.

Wim—Certainly, there is something that is just so fascinating to read…the random bits.

Monique—And then you take a spike and impale it! 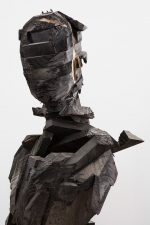 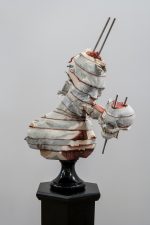 Monique—Going back to inspiration, and maybe I am making meaning where there is not, but it seems to me that a lot of the ideology about your work—and we’re talking about violence—I see a lot of Italian Futurism in your references. So, another kind of imperialistic narrative—the dynamism, the form, the speed, the materials. Were you thinking about the movement at all?

Wim—I had to start thinking about it when some of the forms I made resembled [Italian Futurism]. Especially, there was one moment when I realized that these large bronzes, they don’t describe the form—they describe an idea of movement, they describe the lived experience of the narrative instead of the physical orders of the form. I had to think of–I think it’s Boccioni, who said he sculpts the air around the object, not the object itself. The movement of air. Mine has none of the optimistic ideal, that almost inhuman…is it a supremacist idea?

Wim—It’s almost the counter of that. Yet it finds forms that are similar. For me, it’s truly the counter-white. In the same way as doing a mirror image of the Pietà, you can still use the form, but it creates the other side that was lacking, so the balance is kind of restored. I haven’t delved into it too deeply. I don’t want to get seduced by some of those forms, extraordinarily beautiful forms.

Monique—The subject of pathos came up during the curator’s tour. I began to reflect on it again when you were speaking at your artist’s talk about some of the abstract works, some of your works in color. We’ve spoken about the politics of South Africa and how they parallel a history—a troubled history—here in the United States. Do you think unconsciously or consciously you reference some of that troubled past in the work? I ask because you were talking about the painted abstract works, the mark-making again, and you said they were the “color of flesh” or “looks like fire.” Before you started working with saturated colors, you worked primarily with black and white. What are your impulses in your work with respect to the history of the country?

Wim—I’m very definitely conscious about it. But [the works] are personal explorations and I’m not intending to propose or propagandize. I really first want to understand it. I don’t want to publish that there is a social aspect, a social dynamic to this. Deep down, it’s not that revolutionary if it’s named; it loses a lot of its potency, or agency. I think things are much more powerful when they’re under the skin, so to speak. It gets behind your eyes without you having even realized.  I think that’s maybe part of what I enjoy seeing my works later on. Yes, it is fire and it is fire in the hills. Because things are burning, or should be. Yes, it is flesh and blood—in a landscape context. Because, this is probably our future. We didn’t have our cathartic revolution in South Africa. Which I’m thankful for, because me and my family might not be around, quite honestly. That means that there is a lot of deferred anger, a lot of unreleased hurt. But those landscapes are battlefields, and it is, to some degree at least, flesh and blood as flowers, as blooms. We still have the flowers because flowers bloom at spring, it’s a new life, a new beginning, after revolution, after change. 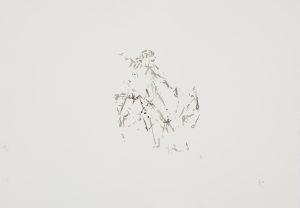 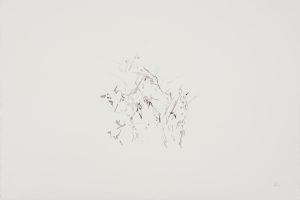 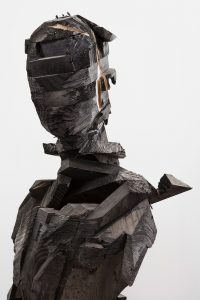 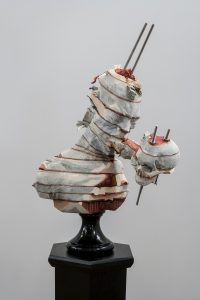