The legendary filmmaker's first New York exhibition, ‘Waiting for the Light,’ is on view at Marlborough Gallery through June 29, 2019.

Even a legendary filmmaker like Pedro Almodóvar gets imposter syndrome. “It’s weird for me to be in this incredible gallery,” admitted the director hours before his opening his first photography exhibition in New York at Marlborough Gallery. The Spanish director, producer, and screenwriter is known for countless films, like Women on the Verge of a Nervous Breakdown (1988), Talk to Her (1988), and, more recently, Julieta (2016), but he’s recently ventured into still life photography. Instead of a colorful cast of characters played by actors like Antonio Banderas, Penelope Cruz, and Rossy de Palma, his new protagonists are pieces of fruit, vases, and wilted flowers, set against vibrant, color-blocked backdrops. The exhibition, on view through June 29 and titled Waiting for the Light, is the result of a daily exercise that Almodóvar would do at his Madrid apartment, in which he would work at his computer until that exact moment that the light hit the composition of vases, colorful backgrounds, and flowers just right. Document sat down with the iconic filmmaker and artist—whose latest film Dolor y Gloria (Pain and Glory) comes out this fall—to chat about his artistic practice, his inspiration, and his ability to give life to a somber moment.

Ann Binlot—What made you take on the study of light?

Pedro Almodóvar—My work is by sunlight. Even night, you have to recreate by using lights and I’m very familiar with working with lights and I I adore working with lights. Fortunately I have a very open apartment that gives out onto an interior courtyard, so I have varying streams of light in the course of the day. It all started out of sheer boredom. It was it was Easter weekend [two years ago] in Madrid, and if you’re not a Catholic, the whole city grinds to a halt, there’s nothing to do. So I started working in the kitchen arranging small still lifes and that’s that’s how the whole project got started. It sounds perhaps naive, but it was a real discovery because I rediscovered the perfection of eggs, the perfection of apples, the perfection of certain types of flowers. Even a kiwi is photogenic. I’ve never thought about a kiwi.

Most of the pictures were taken in 2019 except the three ones with a large group of flowers taken in late 2018. Over time I started becoming more and more interested in the outcome of the process. Fortunately, I have a bunch of vases at home because I buy vases everywhere I go with the idea of using them as a decor for the films. Eventually I got bored of the vases. 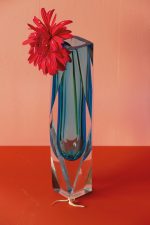 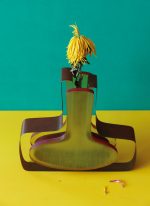 Ann—Where do you get the vases?

Pedro—Very different places. This, for example is from Venini, a very famous Italian—many of the Venini work, Ettore Sottsass, many Memphis style artists work for them. That one I bought in one small shop in SoHo, New York. This one is from Baccarat, a very old place that’s always doing things in glass. Once I had those kind of surfaces, I really started alternating playing with the background and surfaces, so this is the surface that’s on the table that the vase is sitting on and that’s the background so I really played around with many different variations of color. I really wanted to achieve a painterly effect.  I didn’t follow the steps of anything specific photographers I was I really wanted to wait for exactly the right light. I didn’t manipulate the light. I just waited for the light to fall in a certain way and really achieve that pictorial painterly effect what I was going for.

Ann—How did you know when the light was right?

Pedro—I was there. There is the small table with the vases. I have many vases and many flowers in different degrees of putrefaction. I discovered also that what I really love is when they are very dry, they are much more photogenic. I have a big window in CinemaScope, which is almost half of the wall, and in front of there, there is a big park. I have the direct light. I’m working on my computer, usually writing, but I’m paying attention to the light. The light changes, sometimes in one minute or two. It depends. Every day changes, and with the seasons of course. With the right light that I really love from 12 to four in the afternoon. The lights in the process of taking in the kitchen are reflected on the on the on the walls of an indoor courtyard, reflected light coming into the kitchen and I actually find it to be a very artisanal and nearly intimate exercise because I do it on my own, and I also do it when I’m working on other things, so for instance when I’m working on writing something. Here’s where I started working with more background panels, I started joining them up. I really wanted it to be a physical object, a physical piece, the background, because you can always tell when you’re photographing something physically, it’s different from adding it digitally. It’s a very different effect. It photographs differently than simply adding color digitally.  I started placing them and then eventually I started placing them obliquely I was just having a lot of fun. And it was it was it was a very unpretentious experience. I started getting constructivist and then I started placing the panels obliquely so they wouldn’t be lined up. Everything is simple, with no pretension, doing it in a very humble way.

Ann—I noticed that even though the flowers are dead or dying, they still look very much vibrant because of your use of color. You do the same thing in your films. It can be a really sad moment, or there’s an air of melancholy, yet because of the color of the sets, there’s this vibrancy.

Pedro—That’s a very actually a very good connection you established. Even though the flowers are wilting, they’re still very bright and alive, even though they’re actually dying out. And you can always tell a very dark story with a vibrancy and vitality. That’s certainly what I attempt to do. 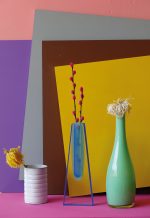 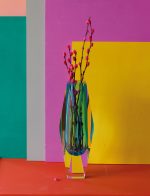 Ann—My last question has to do with your art influences—and your design influences, because you noted Ettore Sottsass and a lot of your films have a very Memphis look to them—and then one of the photos was an ode to Giorgio Morandi—

Pedro—The two references that I have, it was Morandi, absolutely, I mean with vases and bottles. I have many, many bottles. On the other hand, this division of the surface, reminds me of David Hockney. It’s very pop. If you remember a decision that he made two or three years ago, he has portraits of people sitting down, and the background, it was always one color for the floor, and one color for the wall. I thought about Hockney when I was doing this. There are many photographers that I love, but I never thought about any of them, while I was doing this. Really I was thinking about is to make a kind of photos that I can use in one of my movies in the wall of some of the characters.

Ann—Are there any on the walls of your newest film, Dolor y Gloria (Pain and Glory)?

Pedro—Yes, one or two, but not these. [Smiling] 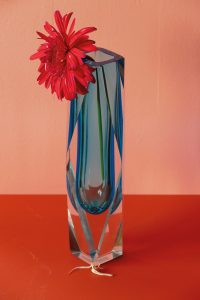 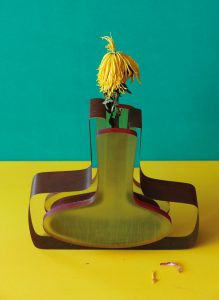 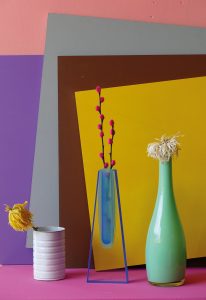 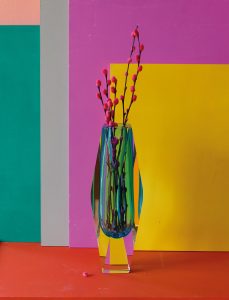