Created by Carly Mark and Ayla Argentina, the new fashion community looks to fuse art and fashion with a real New York twist

Carly Mark and Ayla Argentina’s new fashion community, PUPPETS AND PUPPETS, creates a narrative that plays at the intersection of art and fashion.

The two met when Mark, a New York-based artist whose practice has included painting, sculpture, and video, brought Argentina on to assist with costume construction. “We were always styling and making clothes for the characters in my video work,” explains Mark. “It was just never a cohesive collection.”

With Puppets and Puppets, which debuted yesterday with an intimate reception during New York Fashion Week, the two shifted their focus from fictional characters to modern New Yorkers. The wearable art pieces mix a ’90s DIY aesthetic with over-the-top harlequinesque costume. Mark and Argentina hope to create a new culture for friends and artists in the city, whom they hope will be confident and empowered when dressed in the collection.

Document caught up with Mark at her studio days before the presentation and went through the process behind its debut. 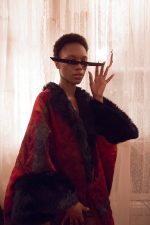 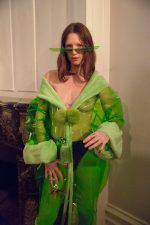 Paige Silveria—What was your intention with Puppets and Puppets?

Carly Mark—Making clothes was always a part of my sculpture practice. We’d create the characters and their clothes. Then we’d shoot them for the video and finally I’d make the sculpture version of the character. There was always a narrative. I think that happens in fashion too. In a collection, the designer is always telling some sort of story. Something that’s very distinct about Puppets and Puppets is that the storytelling aspect of it is strong.

Paige—Who are the characters in this story?

Carly—The Puppets and Puppets person is Ayla and me. It’s our friends. I’ve been wearing the t-shirts every day. The fantasy looks are very similar to the looks I was putting on the characters I was creating in my art practice. The collection is for a very modern New York person.

Paige—There’s a very handmade feeling to it.

Carly—It’s definitely anti-fast fashion. It’s about getting back to handmade things. We’re really merging the costume stuff with the actual person to fit that narrative. The collection is an intersection of art and sculpture, and it’s for a person that exists in a city, going out every day—wearing things that are art objects, but also that can move. [We’re] making wearable pieces for our friends and other artists; people that appreciate feeling empowered in what they wear. It’s a mix of what we wear and who we are. It’s really just crossing that barrier between what you make with your hands and how you carry yourself.

Paige—Tell me about the construction.

Carly—We’re really attracted to materials that don’t look like anything else or are confusing. We’ll get the deadstock of the unconventional stuff that people don’t know what to do with. Ayla went to FIT for pattern construction so she makes all of the patterns. She knows my style because we’ve worked together for a long time. For instance, I told her I wanted a suit that I could wear during the day, but also out at night. We were looking for light materials and we landed on a light wool. The structure of the final suit is boxy, but sexy. It moves and it’s cinched at the waist. It’s comfortable. We’re both super interested in all of the Japanese designers, like Yohji Yamamoto and Commes des Garçons—the Japanese designs that are androgynous and super wearable. 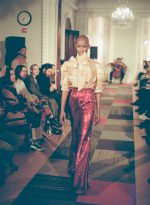 Paige—There are also some recycled elements?

Carly—We salvaged maybe 35% of the collection. I sourced a lot of items that are worn and slightly discolored in beautiful ways, from eBay and Salvation Army. I love when things have had this other life. We have some vintage shirts that we added the Puppets and Puppets logo to with jeweling. A lot of the pieces have originated in some of my sculptures or video work. We’ve just moved it forward. Like a pair shoes that I wore in a film I made, for instance. I crawled around in a basement in them for a film so they’re really beautifully worn and dirty. I really love that. I’ve always really loved things that look like they’ve lived. New Yorkers look like they’ve really lived.

Paige—There is quite a sliding scale of wearable to very dramatic, costume-like pieces.

Carly—Although the brand is a divergence from the fantasy sculptures that I was making in my studio, it was inevitable that we’d mix in some of that with the everyday pieces. Some of the fantasy stuff is very royal—I watch Game of Thrones constantly. But also it’s like Dior in the 2000s; the grandness that Galliano was doing. Obviously he went through his phases and right now this is ours.

Paige—Tell me about the casting.

Carly—Casting was really fun. It was part of the storytelling. I plan on making a film at some point in my life, so I’m really into things that are cinematic. Everyone we cast is someone that personality-wise or aesthetically embodied what we’re making and who we are. Some of the models have been here a few times over the last few days. We’re just hanging out with them. We were talking about Telfar and how strong his brand is. It’s not just clothing; they’re creating a culture. We’re interested in that same thing—New York culture. The people that engage with what we do, we want them to be confident with what they’re wearing.

Paige—And you worked with a lot of other creatives on this project, including Poppy Lissiman on the sunglasses and Margalit Cutler on the resin platform shoes. The collaborative aspect informs that culture significantly.

Carly—I love collaborating. I love that about fashion. It’s so much more about collaboration than strictly fine art. Even when you’ve put an outfit that you’ve made onto a model, you’re all of a sudden collaborating. The way that this suit functions on one person is different than how it will on someone else. It starts to become a whole other character and narrative. And styling is just another way of storytelling. I don’t think that’s too far of a departure from my Haribo paintings. 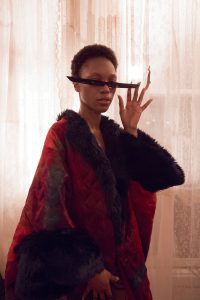 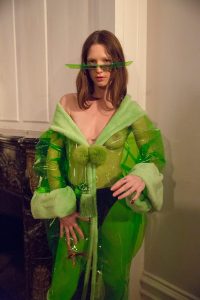 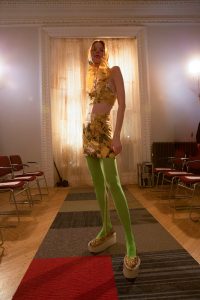 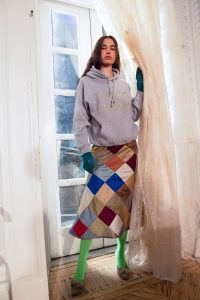 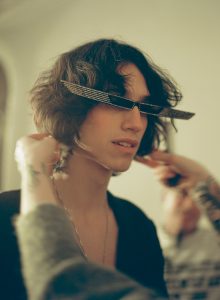 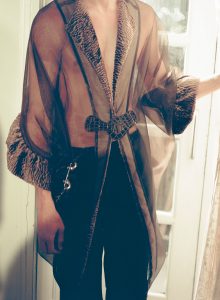 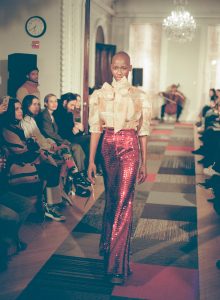 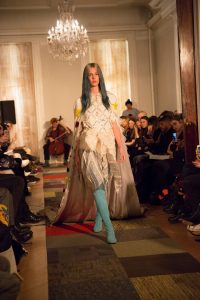 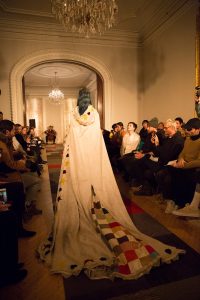 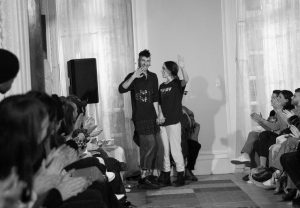