A new show at the Fashion Space Gallery in London surveys illustrators, photographers, and fashion designers redefining the world’s perception of Latin America from the inside out.

Fashion Space Gallery is tucked inside the London College of Fashion, just off London’s Oxford Circus. The gallery’s latest exhibition, Mundo Latinx, is essentially one room, but hung on the walls and from the ceilings are a myriad of works that go some way to exploring the full diversity of contemporary culture in Latin America. “The common thread throughout all the artists in the show is how they work with identity,” says co-curator and one half of the White Lines Projects Xenia Capacete Caballero.

From stereotypes to the role of the diaspora, the curators wanted to chart how contemporary identity is changing is the many countries that make up the region. “We looked at lots of different subtopics,” says the other curator and fellow White Lines Projects founder Fiona McKay. “[With] ethical fashion and working with indigenous communities, such as Carla Fernandez’s work, we wanted to look at it from many points of history and really dissect what Latin America means. We found it is a construct formed from the outside looking in, as opposed to them, themselves.” 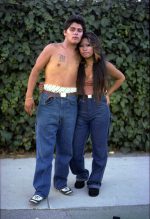 McKay goes on to compare it to Orientalism. “It’s the same construct where everything is lumped into one category,” she explains. It’s also where the title of the show comes from. ‘Mundo’ is Spanish and Portuguese for ‘world’ and Latinx is the neutral alternative to using gendered terms like Latina or Latino. “It’s a figurative way of saying there’s a whole world with many, many things inside it,” adds Capacete Caballero.

Diego Moreno, A type of Indulgence, from the series Los Panzudos Mercedarios (Guardians of Memory), 2016.

That ethos expands the exhibition; from the transgender community in Colombia’s coffee bean farms, captured by Lena Mucha, do to John Valadez’s street photography of the Chicano movement, the portraits are as diverse as they are warm. Although its primary focus has always seemed to be fashion, the Fashion Space Gallery is rarely restricted to garments alone. In fact, the only garment in the space is a dress by Lucia Cuba, a Peruvian fashion designer, campaigner, and scholar who treats each of her projects as a campaign, switching between fine art, lectures, documentaries, and fashion to unpack the issues at hand.

Also on display are three segments of Articulo 6—a design and activism project by Lucia Cuba that looks at the issue of forced sterilization of indigenous women in Peru between 1996-2000. Over 200,000 women were affected in one of the largest sterilization projects since Nazi Germany. Just last year, a request to pardon then-president Alberto Fujimori for his role in the sterilizations was overturned, and at the end of last month, he was returned to prison. “Cuba’s work is what we call fashion activism,” says Capacete Caballero. “It’s very political.” In La Espera/The Waiting, women’s faces are obscured by a long, thick plait of hair—emphasizing just how callously their identities and autonomy were eradicated; their one remaining characteristic being their indigenous heritage—which is why they were selected for the programs in the first place. 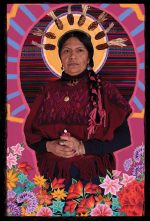 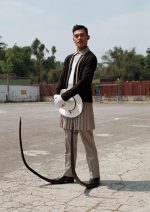 The other issue that exacerbated the sterilization scandal was how little the women understood what was happening to them. Inadequate guidance was given to the women; leaflets and other information were only provided in Spanish when they spoke a local dialect. At the time, 16% of the total population were non-Spanish speaking. In Mundo LatinX, emblazed across the women’s dresses are an assembly of words—from the women’s names to the local word for contraception.

Despite there being only one garment in the show, everything in Mundo LatinX harks back to fashion, just as exploration of identity does—especially one that’s had such a visceral impact on how the 625 million people who call Latin America home are perceived across the world. Mundo LantiX is a sharp attempt to undo that typecasting, one stereotype at a time. 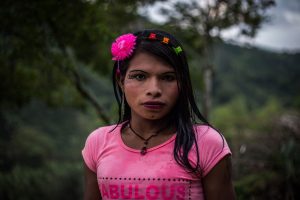 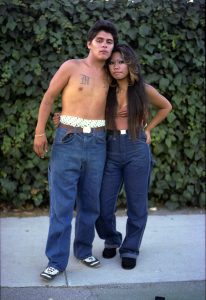 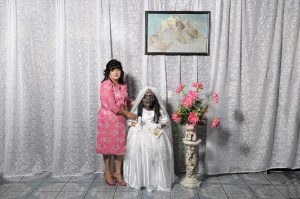 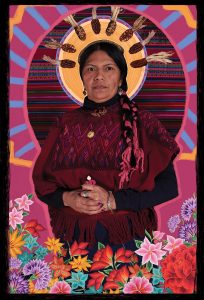 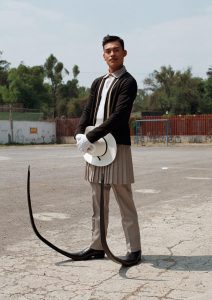