In her new project ‘Surface Tension,’ Tabitha Soren suggests our digital-era anxiety can actually bring us closer together.

We’re all at war with technology on a daily basis. We use Apple phones to rage-tweet about Silicon Valley surveillance, scroll past images of cute infant cousins interspersed with graphic news clips, consume information at a rate that makes fact-checking futile; a psychological blur of chaos all filtered through fingerprint-stained glass. It only takes the right light hitting your screen at the right angle to make you realize you’re squinting at layers of sweat, grime, and grease.

“It sort of looked like a poor man’s Franz Kline painting,” Tabitha Soren—fine art photographer and former MTV news reporter—recalls of reading a book on her iPad during a flight when she suddenly saw, in the screen, a mirror for our collective internal anxiety. That moment was the genesis of her latest project, Surface Tension. Screenshots and photographs—culled from her Facebook feed, text message archive, and relatives’ Dropbox folders of vacation photos—are obscured by fingerprints and swirls of grease, as beautiful as they are bacteria-ridden. The background images range from cats to climate change and social justice, the titles of each hypnotizing work a rudimentary copy-paste of the original source URL.

It’s not just machines that cause destruction. Human touch, Soren illustrates, can be dangerous too. Meanwhile, anxiety—which she also explored in a series of portraits of baseball players—can bring us together. “The more that people in the United States can look into the eyes of another person and see, ‘Oh, at the end of the day we’re basically the same’—that is something the United States really needs right now.”

Hannah Ongley—Your previous work has also explored states of intense anxiety. Is there something that naturally draws you to exploring that feeling?

Tabitha Soren—I wish I knew [laughs]. I wish it was only anxiety that I was haunted by. I’m making work in this urgent political situation and a lot of activists are making work that is very social justice-oriented. I feel like my anxiety and darkness is getting inside the work. I’m trying to present some sort of commonality between people. The politics of the United States are such that our differences are being used to divide us. I—as a human being—just try to function on a day-to-day basis. Obviously anxiety is not a great thing so you try to think of some positive aspects of these instinctual reactions to the world. For me, having a project about the fight-or-flight response, in the case of Running, or panic attacks, in the case of the oceanscapes in Panic Beach, makes people realize that we’re really just another version of each other.

Hannah—Do you think there’s something affirming and human in the fingerprints too?

Tabitha—Definitely. I think these screens are designed to be these amazingly perfect, shiny, oleophobic devices that are so the opposite of us as human beings. I’m looking at my hands and they have pen marks on them, I’m sure there’s bacteria I can’t see, I’m hairy, my fingertips are a little sweaty—we’re the opposite of the machine. To make these images intentionally beautiful, I think, is a great reminder that all of our imperfections are too. I think the machines really resist the essence of humanity. But I love them too—it’s not like I’m anti-technology.

Hannah—I think that’s the common struggle. You hear all these stories about the Amazon apocalypse then come home and order something on Prime. 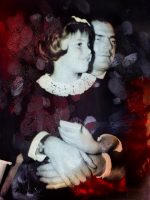 Tabitha—Oh god. We can go down that road, if you want! There’s also the damage to the environment. I’ll have to look it up, but I saw a fact the other day just about the amount of power we’re using to keep all our devices running. It’s shockingly depressing. There are landscapes [in Surface Tension], one of coral reefs that are bleached beyond repair, one of glaciers that are melting, and one in Greenland, which is actually shrinking due to human touch. Touch relates to each of the images, so the background images are about touch, and then you have the fingerprints on top.

Hannah—It’s funny because I’m looking at the images on my computer and I can’t tell which are my fingerprints and which are part of your work.

Tabitha—[Laughs] exactly! If you could get to Boston… Scale always affects the way viewers absorb the work, right? If I was able to send you a detail of one of the images, you would see how it’s incredibly juicy and shiny, and there are these rainbow prisms that happen with the sweat—especially if my son has been using my iPad. They made these jewel-like rainbows and bubbles, and the grime goes from incredibly ugly to really beautiful. Many of the pictures in the show are 5×8 feet. I’m certainly aware of Thomas Ruff’s work, and Penelope Umbrico’s work—using appropriated images from the internet—and those are brilliant in their sort of blowing up of the screen, and they’re very dissonant, and you get this over-pixelated image. My work, in this project, is not like that at all. It’s incredibly painterly, because I’m shooting with an 8×10” negative. The negative itself is larger than an iPad. So when you blow them up, the fingerprints are totally sharp and they’re bigger than your head.

Hannah—Why did you decide to include the full source URLs and Dropbox links for each image?

Tabitha—As somebody who takes images and doesn’t really like people to use them without permission, I felt like that was a way to give credit. But also, most of the time I’m just taking screenshots of moving videos or news stories. The ones that aren’t are friends from Instagram or Facebook, or things that have been texted directly to me. Those people, of course, I got permission from. I think [the image source] also gets to a more important idea about our lack of interest in distinguishing reality from authenticity. Being completely consumed in digital culture, and having virality being more important than veracity, is a real problem. I think that’s how Americans ended up with a president who feels entitled to make up his own facts. [The URLs] are a question of, ‘Oh, where did this come from?’ Shouldn’t we be asking that of everything that we look up on the internet?

Hannah—I also understood the URLs as emphasizing how removed we are from certain images—the contrast between the original source and the layers of fingerprints.

Tabitha—Absolutely. It’s just such a layered experience. The act of being productive on these devices is layered. How many times have you been on your computer trying to find the window that you need to be dealing with right now? You have an Amazon cart open, you’ve got an email that you didn’t finish writing, you have documents where you’re writing a piece as you’re trying to find stuff online that gives you evidence for what you’re writing—our brains are constantly going in 12 different directions, and that can’t help but create distance.

Hannah—It gives me anxiety to think about. I’m constantly causing my computer to crash because I have 500 tabs open.

Tabitha—[Laughs] I’m on the road right now on this tiny little laptop, and it’s just so different from my desktop, where I’m much more capable because there’s more surface area. I managed to pull up Raphael, so that’s good!

Hannah—Have you noticed newer platforms like YouTube change the way that your work is consumed? I’m thinking about those 90s MTV videos.

Tabitha—I don’t think about it too much in terms of the work that I do now. I’ve just accepted that my audience is a tiny portion of people who actually go to see art at galleries and museums. There’s really not even a television audience that can compare to the audience most of us had in the 90s. There are just too many outlets, right? I had a book come out with Aperture last year, so I had to do a bunch of interviews, and there were people who would stop because they had to tweet what I just said, before someone else did. It’s not like I’m Donald Trump or anything, I’m not making any news, I was just talking about the work. The idea of the hyperactivity and the impatience that I would imagine news directors have, I really do feel like it undermines the veracity of the subject we’re talking about. I don’t think that timelines allows for fact checking. When I think about what it must mean to be a reporter now, I’m not wistful about it at all.

“Tabitha Soren: Surface Tension” is on view at the Davis Museum in Wellesley, MA from February 7 through June 9, 2019, with a reception to be held February 7 at 6:30pm. Soren’s artist talk will be held at Wellesley College’s Collins Cinema on April 17 at 7pm. 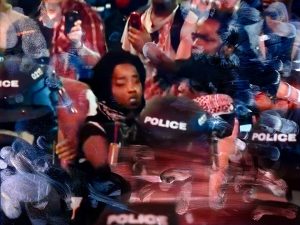 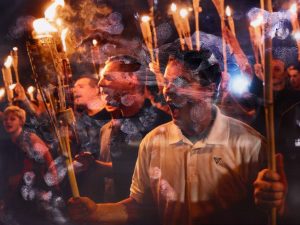 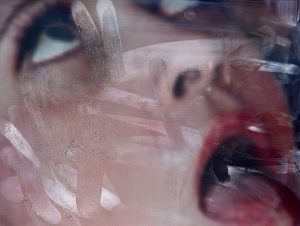 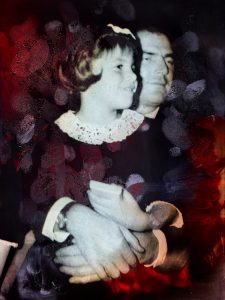