As the 25th anniversary of the brand approaches this year, longtime collector Ryan Fuller is showcasing the world’s only complete collection of every Supreme skate deck ever released.

It’s hard to believe that James Jebbia founded Supreme in 1994 as a skate brand. It may now be a household name, but it’s really in recent years that Supreme has garnered mass obsession and become synonymous with hype culture. Before swarms of kids crowded Lafayette Street every Thursday, pining for the latest drop, Supreme was a small shop known for  the bold graphics and punk attitude that permeated their designs and business model.

Displayed at Sotheby’s New York through January 20, Ryan Fuller’s personal collection is carefully and lovingly compiled. Now that his decade-long quest to acquire every deck has been completed, it’s time to pass the collection on to a new home. “It’s going to be sad when they don’t belong to me anymore,” Ryan tells Document. It’s bittersweet, no doubt. But I’m old, bro. I’m 37. I need to be a responsible old man and buy a house—support my child [laughs].” Luckily, Ryan’s passion also happened to be lucrative—the complete set of 248 decks is expected to net over $1 million.

In celebration of the brand’s heritage, Document talked to Ryan about the five most iconic deck sets Supreme has ever released. 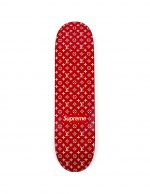 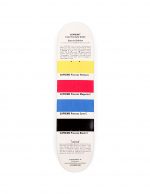 17 years before this official collaboration, Supreme released a set of skate decks adorned with a bootleg Louis Vuitton monogram. Those decks were recalled two weeks later when Supreme received a cease and desist letter from LV. So, in 2017, when it was announced that Supreme would be collaborating on an official capsule with Louis Vuitton, we saw just how much the brand had grown since 1994. The deck was released initially at select global pop-ups before becoming available exclusively at select Louis Vuitton stores. The frenzy around this collection was monumental: “The popup got shut down,” Ryan recalls. “They had riot police out there, they had helicopters out there, it was intense.” Supreme has been known to use unlicensed artwork, but it’s not often that this leads to an official collaboration—let alone one of this magnitude.

Contemporary American artist Ryan McGinness is primarily known for his psychedelic visuals and colorful paintings, sculptures, and installations, but in this rare Supreme deck set from 2000, he lays out the building blocks to his artistic practice: Pantone color codes. The set consists of five decks garnished with factory-printed Pantone color palettes—chromatic scales of grey, blue, red, and green. “I had four out of the five for quite some time. It was the grey one that took me a while to find. I had bought a few of them from one of my buddies in the UK, who actually met Ryan McGuinness and had them signed. He sold me four out of the five, and years later I was able to track down that grey one from a guy in Japan to finally complete the set,” Ryan says. “They’re very different from what you would expect from Ryan McGuinness.” 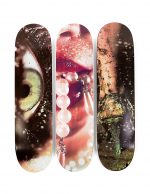 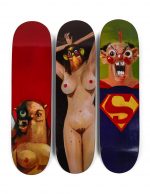 Highly influential in the New York art scene in the mid to late 1980s, George Condo’s career was launched back into pop-culture in 2010 with his commissioned album artwork on Kanye West’s My Beautiful Dark Twisted Fantasy. That same year, Supreme enlisted Condo to create three decks with his paintings. “Everybody always asks me what my favorite set is out of all of the decks, and it’s the George Condo set for sure,” Ryan says. “You can just sit there at stare at those things.” 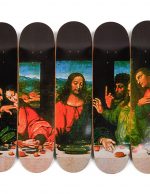 Perhaps the most famed deck-set in Supreme history came in 2002 with a reworking of Leonardo da Vinci’s painting, The Last Supper, sprawled across five decks. “The Last Supper Set is probably the holy grail of Supreme deck sets, no pun intended.” In addition to the five decks made available globally, there was an extremely limited release of a Japan-exclusive deck—an enlarged rendering of Jesus, which is perhaps the rarest Supreme deck to ever exist. Of course, Ryan has it: “I paid ten grand for that one deck alone. That was one of the last decks that I acquired to fill my set. It’s so hard to find. I knew a few guys who had it, but they wouldn’t sell it. They didn’t care–I couldn’t throw a number out there that would make them sell.” 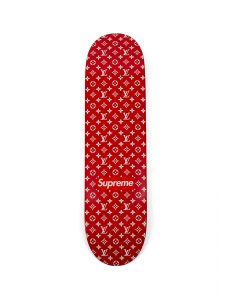 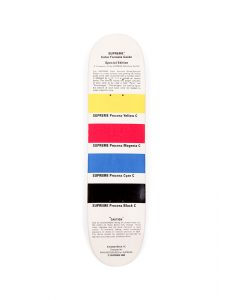 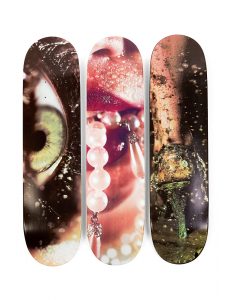 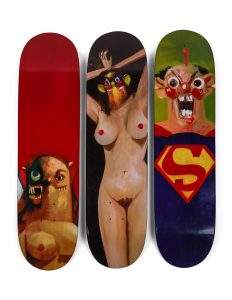 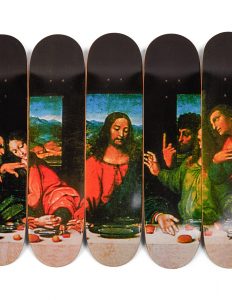