Holy Fools is the latest work from Ondine Viñao, a video artist interested in our understandings of control. Pulling inspiration from Bruce Nauman’s Clown Torture, Viñao’s Holy Fools is comprised of four different clowns reflecting on traumatic moments from their childhood. What Viñao borrows from Nauman, the clowning and torture and self-harm, she makes her own with feminine clowns embodying their own experiences in song, monologues, and even the simple act of getting dressed. Holy Fools provides both its performers and its audience with the space to work on oneself. Document sat down with Viñao to discuss process, exposure therapy, and the solitude of childhood trauma.

Allie Monck—Could you discuss Bruce Nauman and his association with the artistic “process movement” and how it relates to the “exposure therapy” aspect of you work? Do you feel those inspire one another or are they inherently different?

Ondine Viñao—Well I’d like to start with saying although I always had immense respect for Nauman because he’s one of the most significant living American artists, I would never qualify him as my favorite artist… My initial interest in this piece started as a sort of joke between a curator friend and I. One day in passing, as a joke, a friend said that I should make my own version, which I went with way more seriously than I had expected myself to… There was also something so simple yet so powerful about it, because it was very limited props, very simple, stationary shots, but still so effective. I think at that point in my practice it felt I was over-complicating a lot of projects. This seemed like a simple formula where I could explore these complicated and twisty things, but in almost this kind of mathematical or scientific way that in its final product, was quite straight forward.

Allie—How did you create the script or plan for each of the actors? Was it a collaborative process?

Ondine—It’s me, it’s Jessie-Ann Kohlman who was the only professionally trained actor in the group actually, there’s Eileen Kelly, and then the other performer is Rachel Fox who has an extensive dance and theater and comedy background… I asked them all to write about one of or multiple of their most painful or traumatic childhood memories, mainly interested in age six, seven to thirteen. I wanted that period where you’re kind of stuck, you have no amount of authority or independence yet. That was the period I was most concerned with and they all answered the question in very different ways. Some people wrote it almost like a scene, others did kind of an inner monologue, another person did diary entries, short ones but a bunch of them. How they answered the question also informed how I crafted these scenes, all of them were inspired by these entries that my performers gave me.

Obviously a huge element of this project is experimenting with this form of torture as a potential exposure therapy. So if it felt like nonsense to them then what was the point? It was very important that they collaborated with me on it.

Allie—Do you feel after shooting and showing them the final products there was a moment where you all were like, “Okay I do feel more comfortable with this now” or do you feel it was kind of…

Ondine—Do I think it worked?

Allie—Yeah, [laughs] which I mean you can’t ever…

Ondine—I don’t know, even just the act of writing it down, however you want to, while keeping this thing [points to head] in mind, and then knowing that you’re doing something based off of it, helps. I mean it does for me at least, sometimes just talking about it provides you with a form of release, and I think with the really hard stuff it can be difficult to even get to that point. So by providing my performers with this shield of the clown character it makes it a little bit easier as opposed to standing onstage as you are. It makes you a little bit more removed, you have a little bit more protection if you’re doing it as another version of yourself. So I think to that end it worked. I know it did something for me, and I don’t think it’s necessarily important that the viewer knows what specifically this person is referring to or what specifically their act or their scene is a metaphor for, the only thing that matters is that the viewer knows that it’s something meaningful to them.

Allie—It’s funny that you bring that up because I had this experience, I think it’s Eileen in one of them where she’s singing that you had put on your Instagram. When I was first looking through it I thought she was singing about an ex. Then I get there and I listen through it one time, and she leans against the pole waiting to repeat it and then she repeats it and I’m like “Is she talking about her parents?”

Ondine—Where were you all through childhood!

Allie—Very far [laughs]. And I panicked because I thought “Those relationships are so inherently different, how did I get that mixed up?” I think that was one of the things about it that was important, the emotive responses to all of them. The one who was getting dressed, I was so mad and I had no idea why. I think it also deals with the relationship amongst women, specifically feminine trauma or trauma with women. Do you feel like that informs the whole thing or does that even matter?

Ondine—Trauma specific to being a woman? I mean yeah, initially my choice to use only women was me being slightly concerned with responding to prominent males’ work starring a male and having me contextualize this with something that makes sense for me. So I thought that one of the obvious first choices I could make as a female, would be to use only females. But on the other hand, I never set out to make anything that was intentionally gendered or trying to discuss gender identity, but because I’m a woman and an artist, it’s inevitably going to be read through that lens no matter what… It wasn’t supposed to be entirely about that, but as I am a woman and all three of my performers were female, the four of us have only ever experienced life as females. The stories that they shared wound up being quite specific to trauma specific to female juvenescence and that forced the project more so in that direction. So it, it’s not that I set out to just talk about the female experience but it kind of inevitably happened. Hopefully there is enough overlap so that anyone from any background could take something from it.

Allie—All of them being in their own space, and the inherent/inevitable solitude that they experienced, especially with that clown in particular [clown played by Rachel Fox], both of hers felt the most alone to me, and maybe it was because of the lack of dialogue. Or even the one in the church, it’s just overwhelmingly alone. Can you speak to how solitude is inevitably an aspect of dealing with trauma?

Ondine—Especially thinking about childhood trauma, the amount of isolation that you feel during that time, and your inability, especially at that age, to communicate this with anyone. You don’t have the tools, you don’t have the kind of safety net or support system you may have when you’re older. The only way to do it would have been to have all of them alone and to emphasize that feeling. Also the stories are of the individual, so by placing somebody else into that situation, I would’ve been doing an injustice to the individual who shared their life with me in that sense… I think having these individuals alone in costume and trying to emphasize how bizarre and isolated they were was the best way to try to express that feeling of what I imagine is probably a common reaction to being a certain age, not being able to control anything, and having something traumatic or painful happen to you.

“Holy Fools” will be on display at Rubber Factory in NYC until February 3rd. 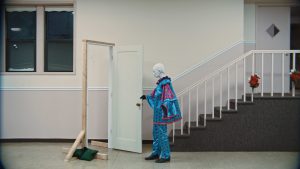 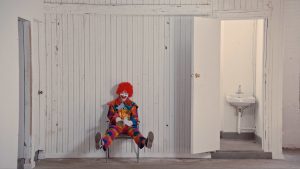 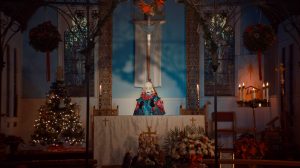 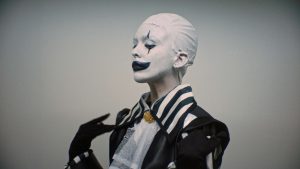 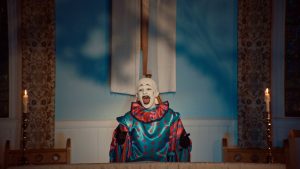