Looking into why millennials are championing the undying appeal of Soviet-era aesthetics.

Anya Fedotova is a 31-year-old Russian photo editor. She works in GUM, a state department store on the Red Square in Moscow. Every day she goes to work in what was once a prime example of democratized enterprise—an attempt to boost Communism through consumerism. On her way to the office, she passes by grandparents pointing out Soviet-era toys, accessories and tableware to their grandchildren, showing them what life was like back in the USSR. “It’s one of the centres of Soviet-era nostalgia,” she tells me. “Entire families come here to enjoy the atmosphere and eat Soviet ice-cream.”

Last month was the 27th anniversary of the end of the Soviet Union. On Christmas Day 1991, Mikhail Gorbachev resigned, and the USSR dissolved into 15 separate countries overnight. But in 2019, is a newfound taste for Soviet-era aesthetics an attempt to revive what was, or an attempt to carve out a new identity?

It’s not just Fedotova who’s witnessed a recent surge of Russian nostalgia for bygone times. In a recent survey by the The Levada Center, an independent polling organization, 66% of Russians said they regretted the breakup of the Soviet Union. That means two thirds of the population would rather live under the USSR than in Vladimir Putin’s Russia. The last time public reminiscence swelled to this size was in 2005, when Putin picked up the reigns of Russia for a second time.

Image courtesy of The Museum of Soviet Arcade Machines in Moscow.

Fedotova thinks Soviet nostalgia is thanks to the uncertainty surrounding the current political climate. The mental retreat into bygone times, she says, goes hand in hand with Russia’s recession. Economic decline began in 2014, and while the recession officially ended in 2017, a weak ruble and decreased household spending are signs that Russians are still feeling the pinch. “People were in a difficult situation in Soviet Russia, but they believed in the bright future of the USSR,” Fedotova says.

The Levada Center polls show it’s primarily older generations reminiscing on an earlier time. But the sense of longing can be felt strongly in contemporary Russian culture. Currently, you can take a VR tour of Moscow that recreates Soviet landmarks as they were intended to be seen. Guiding you through the Soviet avant-garde architects’ ouvres: a Stalinist skyscraper looms over the modern-day Zaryadye Park, and The Palace of the Soviets reappears in the place where Moscow’s Cathedral of Christ the Saviour has stood tall since 2000.

Arcade games dating back to the mid-70s are also seeing a resurgence in popularity. Created by three friends in 2006, The Museum of Soviet Arcade Games is somewhere between an adventure playground of Soviet-era arcade games and an archive of childhood experiences. The Arcade’s first site opened in Moscow in 2007, before expanding to Saint Petersburg in 2013, and see 50,000 and 60,000 daily visitors passing through the doors of the arcades respectively.

But nowhere is pinning for the past more prevalent than on Nostalgia TV; a channel devoted to the music, movies, and state TV shows of the 70s and 80s. Launched as a single cable station in 2004, Nostalgia TV has now expanded to a YouTube channel and online radio stream. But it’s more than just a trip down memory lane—it’s a unique space for people to talk about their fondness for the past. As well as showing reruns, the channel produces its own programs, like chat shows where average people talk about significant events from the USSR. “Before and after”—a chat show where guests discuss historical events—was a finalist for the 2009 Russian National Television Award for Highest Achievement in Television, presented by Vladimir Molchanov of the Russian Television Academy.

“As experiences connected to products are invented and produced… historical knowledge of the epoch can be considered rather poor.”

Ekaterina Kalinina is a researcher in post-Soviet nostalgia at Copenhagen University in Denmark. She has worked for the Swedish National Defence University looking at Russian patriotism, biopolitics, nostalgia, and national identity, specifically during the collapse of the Soviet Union. She’s spent the past ten years examining how the emotions of nostalgia manifest themselves in contemporary Russian culture; from design and cuisine to television shows and online communities. She’s written extensively about Nostalgia TV and says it’s more than just a simple trip down memory lane. “You can learn about the experiences of people who’ve lived in a country and experienced events that we have never witnessed,” she tells me.

Kalinina thinks Russians’ current nostalgia is caused by a reduction in the welfare state. She points to the Levant Center’s findings that the older generation is considerably more nostalgic, and puts this down to a growing sense of economic insecurity amongst people who used to have it easier. “[It’s] the ones who find themselves in more vulnerable economic and social positions,” Kalinina says. “It’s clear in what they are nostalgic for: economic security and social welfare.”

But this isn’t the sole reason for the revival of Soviet aesthetics. “At the same time, this sensibility is also manifested in interest and fascination with the past like the design and memorabilia,” she explains. “I call it the archaeology of nostalgia. You can find it in western countries too; from second-hand vintage clothing to fonts. Moreover, that nostalgia manifests itself as a commercial endeavour, with new products being created like The Museum of Soviet Arcade Games.”

Fedotova, who is surrounded by Soviet replicas on her route to work, has also noticed a trend for Soviet-era casual style among the younger residents of Moscow: “Sometimes you see people wearing dresses or costumes from another era and you can’t recognise where you are,” she says. She is also a fan of architecture, design, and music of the time. “I totally love Soviet-era architecture, especially buildings from Stalin’s epoch,” she tells me. “And Soviet-era music is something significant to every Russian—even me.” She goes on to reminisce about “Katyusha”—a patriotic Russian folk song about World War II: “It must be in the Russian DNA to remember all the words.” Vitalijis Vas, a science communicator who lives and works in Saint Petersburg as an event manager and lecturer, is also fascinated by the aesthetics and sounds of an older generation. “Music made in Soviet times was for grown-ups,” he says, “that’s why the lyrics were so deep and fascinating.”

But all this renewed interest comes with a danger of oversimplifying the past, or eradicating social evils committed by the Soviet Union. And nowhere is that more prevalent than on the internet. “There are a large number of online communities where people share memories and myths about life under the Soviet Union, as experiences connected to products are invented and produced… historical knowledge of the epoch can be considered rather poor,” says Kalinina as she explains how falsehoods are spread.

Kalinina thinks the unearthing of Soviet propaganda might be helping to construct a version of Russia that never existed. She uses the example of the Museum of GULAG in Moscow, a state-administered attraction dedicated to the horror of the Soviet labor camps in 1930-1950. When GULAC asked people what they knew about Soviet labor camps for an awareness project, the museum realised the general public were not very well informed. “They discovered out that many young Muscovites are quite ignorant about the matter,” Kalinina recalls. “Taking into consideration that Russian people know little about the Soviet period and given the positive myths spread by documentaries of a questionable quality, this nostalgia for the Soviet Union that some might experience is a longing for the time and country that have never existed, or existed only in Soviet propaganda.”

Without meaning to, nostalgia can easily evoke the politics the Soviet Union. It’s something the curators of the Museum of Soviet Arcade Games were well aware of when they thought about how to dress their sites. “We are not a museum of the USSR,” says Daria Zvereva, curator at the Saint Petersburg site. “There are no red flags or Lenin portraits throughout the entire museum.” But even she recognizes that total detachment from Soviet politics is impossible, because one wouldn’t exist if it wasn’t for other. “In my opinion, when you speak about the USSR, you can detach Soviet culture from the Soviet system, but it’s impossible to detach politics because the whole thing is politics.” 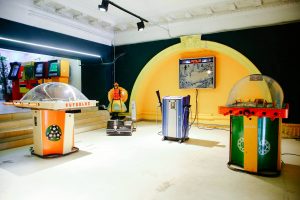