The Russian art collective and director Fabio Cherstich strip the Orientalism from Giacomo Puccini's famous opera, setting it in the multi-ethnic matriarchy of 2070 Beijing.

For decades, opera critics have been debating whether it’s time to retire Turandot, the famous final piece written by Italian composer Giacomo Puccini in 1920-1924. Not all art ages well, and Turandot’s Orientalist and misogynistic elements have become increasingly difficult to ignore. One of its most recent productions—performed by Opera Philadelphia in 2016—drew ire for using yellowface makeup in its exoticized portrayal of ancient China. And misgivings were hardly quelled by Donald Trump repeatedly blasting the opera’s final aria, “Nessun dorma,” at campaign rallies in the lead-up to opening night. (Nor was the connection between Trump, Puccini, and Mussolini lost on the internet.)

But Turandot hasn’t been retired, and more than a century after Puccini’s opera debuted, a radically modern version will finally arrive in Italy at Palermo’s Teatro Massimo tomorrow. The new production is a collaboration between Italian director Fabio Cherstich and multi-disciplinary collective AES+F, a group of four Russian artists formed in 1987. Tatiana Arzamasova, Lev Evzovich, Evgeny Svyatsky, and Vladimir Fridkes started working in theater in the 80s before exploring digital technologies in the 90s. They decided to move Princess Turandot’s kingdom to 2070 Beijing—now the techno-feminist, matriarchal Capital of the Global Empire. Princess Turandot is no longer a man-hating Dragon Lady assassinating her innocent suitors. AES+F’s monarch is more sympathetic, merely plagued by residual trauma from our present day, which manifests in grotesque public displays of adoration from the kingdom’s brainwashed masses. “This catalog of harassment is connected to #MeToo and the things that are happening to women nowadays,” AES+F’s Svyatsky explained at a preview of the bold new performance in New York last week.

AES+F’s production troubleshoots the Orientalist nature of Turandot by imagining a globalized, multi-ethnic world. “We keep the symbolic element of the Dragon Palace of Turandot in the bionic city of Beijing,” Svyatsky said, describing only one facet of the biomorphic architecture of this future society. A majestic combination of video projections and live performers, the opera is both photorealistic and surrealist; horrifying and exquisite. Decapitated male heads float slowly across a watercolor sky on flower petals, while an enormous Medusa-like octopus, covered in gaping mouths and bobbing breasts, descends upon the skyline. It all appears hyper-contemporary, though the technology itself is surprisingly primitive—as with all AES+F projects, it’s less about the medium than the content, and challenging outdated ideas for a modern audience.

Costumes are also relatively simple, consisting mostly of blue jeans and white underwear—more Calvin Klein campaign than a Chinoiserie-themed costume party. A “Fake News” character, meanwhile, serves as a metaphor for the mass hysteria unleashed by the European cultural metropolis of Paris. Fans might hear echoes of AES+F’s Islamic Project performance and installation from 1996, which explored social psychoanalysis to visualize and challenge Western paranoia about Islam. That “Nessun dorma” aria might be the perfect soundtrack for Trump’s 2020 rallies after all.

“Turandot” opens January 19, 2019 at the Teatro Massimo in Palermo, Italy, before traveling to the Teatro Comunale di Bologna in May, with more dates and theaters to follow. 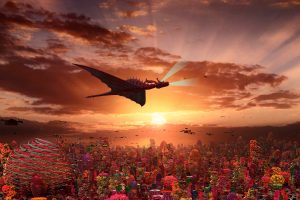 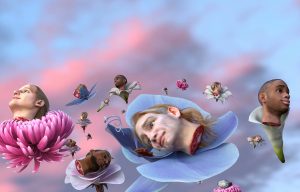 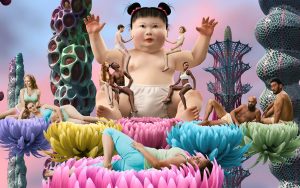 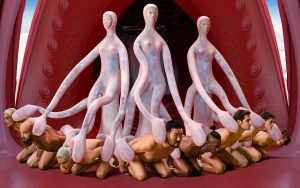