Rafael Lozano-Hemmer grew up in nightclubs (his parents owned Mexico City nightlife spots spanning salsa and drag performance) and his electronic art installations are sort of like them: thick with the stench of other humans, pierced with bright fluorescent light, and most mind-altering when they pull a good crowd. They can also be very disturbing if you stay too long. Take Pulse Room, a basement-like space filled with 300 incandescent bulbs that flash to the rhythm of participants’ heart rates. Or Vicious Circular Breathing, a sealed asphyxiation chamber using electromagnetic valves to fill paper bags (and your lungs) with second-hand air. “[My parents] were pioneers in these kinds of very progressive, urban clubs in Mexico, which at the time was a very homophobic place,” Lozano-Hemmer tells me over the phone a week after Art Basel in Miami Beach, where he spoke on a panel hosted by Document Journal at Prada Mode. Titled Digital Exhaust: The Art of Data and Surveillance, the panel probed the limits of human communication and its relation to human identity. Lozano-Hemmer sees human identity as a performance, and the ethics of technology as equally fluid, if not boring. He doesn’t seek to offer solutions to our hyper-capitalist plight—just make us aware.

Hannah Ongley—How did [your parents owning nightclubs] influence your interest in connectivity?

Rafael Lozano-Hemmer—One is in my use of light. Most of the time the artists I admire that use light as a medium—James Turrell, Robert Irwin, Dan Flavin, or any of the masters of so-called ‘light art’—come from the tradition of an almost spiritual approach to light. In the case of Turrell, he’s a Quaker, right? So it’s the inward light that the Quakers look for. In my case, it’s not the exact opposite, but it’s very different. It’s basically the idea of the light of disorientation. The light of the nightclub allows you to hide, allows you to be somebody other than yourself. So the strobing lights, the disco lights, the fragmentation and color-changing—all of these things create an ambience in which you can hide. The other influence of these nightclubs is the idea that a good party is not just the music and the ambience and the venue, but the people. It’s the people who make the party what it is. In art, we have the same phenomenon. You can make a great artwork but it is only in relationship to how the people see it or perform with it or relate to it that the artwork has any merit, in my opinion.

Hannah—Your art is sort of like a nightclub. It literally doesn’t work if no one shows up. How did you compel people to engage with it when you were just starting out?

Rafael—I started working in performing arts. So I graduated with a science degree—I have a chemistry degree—but all my friends were performing artists. They were choreographers and writers and musicians and so on. I started working with them in performance and theater. I was basically the director, or the guy who would organize the staging, and I would program environments—for example, a big eye that followed a dancer wherever she went. Over time, I realized that the public could be the actors. You could convert these theater environments into something that could have a life of its own. In the case of the eye, it would no longer follow a dancer, but it would follow the public walking around an exhibition space.

Hannah—Do you see death in a similar way, in terms of how we are constantly transforming and performing identities? Like it’s just another step?

Rafael—Yeah, absolutely. It’s fundamental. In fact, what’s really abnormal—not only unnatural—is the way that we pretend to be this solid being, where identity is preserved over time. There are all of these societal structures that try and integrate people into very discreet interpretations of themselves, and it is the job of art to underline that there’s nothing natural about those constraints, that people want to evaporate, that people want to liquify. In neuroscience they call that malleability—the brain can remap itself to be many other people. I love that, because I think that the idea of the individual has seen its last phase. The idea that we are polymorphous, that we are several people inside of ourselves, is a really healthy idea. It’s what freedom is about.

Hannah—How do you reconcile your fascination with death with your reported unwillingness to engage with some of your own works? I think you said one of them was grotesque…

Rafael—Oh, I called it ‘disgusting’ [laughs]. So I came up through the 90s and 2000s in media art. And media art was, at the time, called ‘new media.’ I find that very problematic. There was an ideology behind it that had to do with gadgets and Wired magazine and what we call the ‘The Californian Ideology’ of the frontiersman. All these banner ideas of progress and futurism—I found all that very distasteful. Among the things that I struggled with was the idea that, somehow, because something is interactive it is positive, or it is empowering, or that it gives the public agency, and that there are infinite possibilities. These are the kind of platitudes that were coming out of media art. They’re still coming out!

For me, it’s interesting to make artworks that don’t engage with that kind of technological positivism. I made an artwork which is a big asphyxiation chamber where people are invited to breathe the air that was already breathed by everybody before you. So you enter into a very disgusting hermetically sealed glass prism, and you spend time just breathing the viruses, bacteria, and pheromones of previous people. It’s a very humbling and horrible experience, because you are very aware that your participation is making the air more toxic for future participants. Ultimately, in this piece, if you participate too much you die. It’s a little bit of a perversion of the concept of participation…in the way that we often present media art as.

Hannah—When you think about the ‘Big Four’ tech companies, do you also think there are shades of grey involved, or do you have a strong negative opinion?

Rafael—I don’t necessarily take a strong opinion against the individual corporations, but I am of course aware, as we all are, that we live in a seemingly inescapable capitalist society that converts us into metrics. We are part of a very large set of algorithms that are [intensifying] disparity of wealth, for example, and economic violence. So I am aware of the fact that it seems very difficult to stand outside of those processes of capitalism. And I don’t moralize—I am a socialist, but I don’t moralize about what my work can resolve or address about these issues. But I think [we should be] aware of the fact that it is our responsibility, collectively, to think of better systems that will not destroy our planet. I see the power that that Amazon or Google has—with our data, with our money—as a moment in history that needs to be superseded by something else. That is what I think the job of all of us is: to imagine what it will be like once we prove that this current system of constant growth is unsustainable. It is my hope that one day we’ll look back at the time and think of it as a time that we were just completely out of tune with the planet.

Hannah—The new Amazon HQ coming to Long Island City seems to be having a similar effect as your art does—making an abstract idea seem very real.

Rafael—Yeah, exactly! I think one of the wider problems is that they’re doing this with public support, or with governor support. This entire thing is kind of organized top-down—it almost is like a UFO lands and changes the entire community, right?

Hannah—Definitely with governor support. I don’t know about the local community.

Rafael—No, well the local community will be crushed. Prices will go up, it will be gentrified… And we need to hold our corporations accountable. I don’t know that any corporation is going to take on best practices and understand how to mitigate the problems of concentration of power. The solution is bigger—it’s almost philosophical. It’s environmental. It’s grassroots. It’s just to be aware of this phase of hypercapitalism that we live in…Did you ever hear that quote, ‘It seems easier to imagine the end of the world than to imagine the end of capitalism?’ I love that quote, because, coming from Fredric Jameson, a Marxist theorist in the United States, we can easily see how the world might end, with global warming and climate change and so on. And yet we cannot imagine that we could come up with a system that does not constantly wreck our planet. I have no solutions, I’m just aware that that’s the challenge of our time.

For a while, since the 70s, artists understood that the way to make a contribution is to infiltrate those systems, and pervert them from within. I think it’s complete nonsense to pretend we could back to being outside of technology. We need to intensify our use of technology, because technology is part of ourselves.

Hannah—That helps me understand your aversion to ‘new media’—it’s not anything new.

Rafael Lozano-Hemmer’s “Pulse” exhibition is on at the Hirshhorn Museum and Sculpture Garden until April 28, 2019. 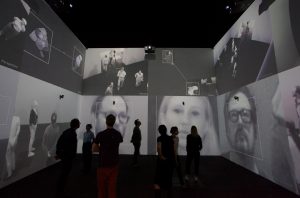 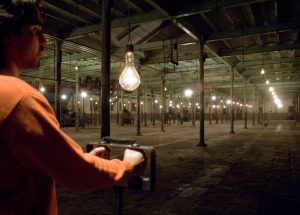