JPEGMAFIA’s angry, experimental rap was the soundtrack of 2018

The rising rapper talks the hostile U.S. political climate, problematic idols, and what sort of music he’ll be putting out at 50.

Every day the American rapper and producer JPEGMAFIA wakes up and faces a country in turmoil. “Everybody in the United States is collectively dealing with a real hostile political environment and a very divided nation in general,” JPEG tells me one morning. “So the overcast feeling of the nation is just kind of droll and dreary and shit. I’m not surprised that more people are rapping about depression because it sucks that shit is really shitty.”

A lot’s happened to him in 2018; from both a personal and a political perspective. When JPEGMAFIA, born Barrington Hendricks, but affectionately referred to as Peggy, dropped his fourth album Veteran at the start of this year, his musical ascent began. His ratified style of experimental hip-hop led to Pitchfork calling Veteran a “remarkable exercise in sound and texture,” giving it a 7.7 while rating it as 37 in their 50 best albums of 2018, and SPIN saying JPEG was “one of the most volatile, frightening, and exciting voices” in present-day hip hop.

It’s hard for JPEG to be apolitical. A veteran of the US Air Force, he’s served in Iraq, Japan, and Germany. Growing up in East Flatbush in Brooklyn, he moved to Alabama when he was a teenager, which in the past he described as “foundational” to his experience of racism.

His lyrics often directly reference his views on race, politics, and class. On “I Cannot Fucking Wait Until Morrissey Dies” JPEG describes himself as a “left-wing Hades, 26 with a fresh .380.” Coupled with samples etched directly from pop culture, everything from WWE soundtracks to Steve Reich and Janet Jackson are cut and turned staccato before being layered on top of panicked beats.

“People contradict themselves all the time. There’s no point pretending to be some infallible person—we know you’re making mistakes.”

Since Veteran dropped, JPEG has been blowing up, but he says he’s only recognized at his local Guitar Center. “I only get recognized at this place,” he laughs. “Do you know how fucking weird that is? Imagine you only got recognized like Papa John’s or some shit like that, like you [walk into] Papa John’s and someone’s like ‘Oh my God! Do you know that is?!’” It’s telling that JPEG gets the most attention in a place where the main clientele is music fanatics.

Despite still being described as one of Baltimore’s rising stars, JPEG now lives in L.A., where he’s spent the past 12 months settling in. “I moved for my own personal life reasons and that didn’t have anything to do with music,” he explains. “When I first came here I didn’t really interact with the music scene much. I was just in my house, getting shit together.”

Even after landing in the epicenter of the sun-drenched and health-conscious west coast, JPEG still goes back to the state of Maryland five to 10 times a year. But while he’s over 2,500 miles away on the other side of the country, the rapper has to contend with stalking his favorite Baltimore artists on Instagram. “I feel sad when I look at them,” he says. “You know I’m just like, ‘Damn.’ I wish I was still there, but it’s important for me to keep doing what I do, go as far as I can and bring eyes back to the city.”

In October, The Fader released a documentary revisiting some of the seminal places that have shaped JPEG’s relationship with the city, including the Bell Foundry—a DIY arts space that was shut down during a countrywide crackdown on safety violations in the wake of the fatal Oakland Ghostship warehouse fire. The Foundry’s address is the title of “1539 N. Calvert,” one of JPEG’s more sentimental tracks on Veteran, where he raps, “Bruh, take your tree out my backwood, Made the beat ’cause I’m that good.” The entirety of Veteran was produced, mixed, and mastered by JPEG.

Piercing his trademark anger is a progressive force confronting the more uncomfortable aspects of human nature. “People contradict themselves all the time,” he says, “There’s no point pretending to be some infallible person—we know you’re making mistakes.” In his early days, JPEG toyed with the idea of an alternative persona, but in the end, he couldn’t be anyone but himself. “Ask any rapper when they first wanted to be rappers, the first thing they do is, ‘I’m going to make a concept album,’” he says. “You just create a persona because I guess you feel like that’s what you’re really supposed to do. I like the idea but the idea of being someone other than myself in public is just kind of strange to me.” 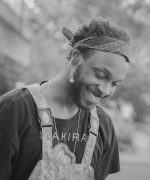 Before making music, JPEG figured if he wasn’t going to make music he might as well write about it, so he studied journalism. When asked for his current take on the media, JPEG just says he longs for the time when newsreaders just focused on telling the facts of the case. Just like his approach to music, there’s little point getting distracted by fantasy when there’s so much going on right now. “It’s like what Public Enemy said,” he explains, “CNN is the hip-hop of life for black people.”

But reality isn’t as easy to navigate as fiction. Things are rarely black and white, and the majority of life is usually spent figuring out the grey mire. “I’m sure anybody who’s going to read this shit has artists that are problematic that they probably listen to,” he says. “And if people found out it would be a contradiction to their ideals.”

JPEG knows firsthand just what that feels like. In April, his favorite artist of all time, Kanye West, tweeted a slew of support for President Trump, and since then has tangoed back and forth with openly advocating for the current US administration. “I guess as a black person I’m always willing to like extend that olive branch to another black person when it comes to something like this,” he says. “I mean, the music—that’s already had an effect on me; I can’t reverse that. That’s embedded from when I was, like, 12.” JPEG’s music is a clear reflection of his own life experiences, which might partly explain why his idol’s shortcomings cut so deep.

But for now, he’s simply enjoying life in L.A. “It’s really great,” he says. “The weed is fantastic—allegedly. The weather is fantastic. The food is fantastic. It’s a good place to live.” With no signs of internal conflict, is there a risk of his new life toning down his trademark anger? “It’s only been this year that things have really been crazy for me,” he laughs, “so I have a lot of things to draw on.”

Regardless of what’s going on in his life, JPEG is adamant he’ll still be turning it into tracks well into old age. “Even when I’m 50 I’ll still be making albums about life—you know, just, like, getting up in the morning and running. I’ll be writing about watching Days of Our Lives, or about ordering shit off the TV, or prune juice and oatmeal,” he says, getting animated about what the future holds. “I would say look forward to that, when I’m 50 and I’m still around, look out for the oatmeal album—it’s coming.” 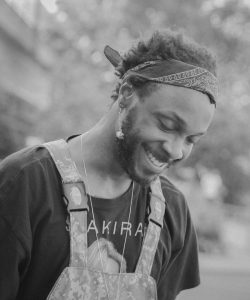