Wes Anderson and his partner Juman Malouf curated an exhibition from 5,000 years of art and antiquities from the collection of the Kunsthistorisches Museum Vienna.

Anybody who has seen a Wes Anderson film knows the auteur’s aesthetic well—it’s usually whimsical and quirky, a world filled with humor, beauty, and fantasy. His partner, illustrator, writer, and costume designer Juman Malouf has an equally magical look to her work, so it made complete sense that the Kunsthistorisches Museum in Vienna would select the couple to curate an exhibition there, using the objects and artifacts from its expansive collection.

The exhibition came about for a series that started with American artist Ed Ruscha curating its first edition, and British writer and ceramicist Edmund de Waal the second. Jasper Sharp, adjunct curator of Modern and Contemporary Art at the museum, met the pair for lunch following a visit there, and he immediately saw the possibilities when they expressed their knowledge about the collection, so one long email later he tasked them with curating an exhibition of their own. Titled Spitzhaus Mummy in a Coffin and Other Treasures and on view through April 28, 2019 before it travels to the Fondazione Prada the following Autumn, the exhibition features 400 objects from the Kunsthistorisches Museum seen through the lens of Anderson and Malouf.

“While Juman Malouf and I can take no credit for the conception and creation of any of the works of art included in this exhibition, we do harbor the humble aspiration that the unconventional groupings and arrangement of the works on display may influence the study of art and antiquity in minor, even trivial, but nevertheless detectable ways for many future generations to come,” said Anderson in a statement about the exhibition.

Anderson and Malouf juxtaposed items in a way that even the most educated art expert would miss, making connections that are unapparent even to the trained eye. They selected Egyptian, Greek and Roman antiquities, Old Master paintings, selections from the Kunstkammer, the Imperial Treasury, the Imperial Armory, Coin Collection, and Collection of Historic Musical Instruments, as well as pieces from the Theatermuseum, the Weltmuseum, the Imperial Carriage Museum, Schloss Ambras Innsbruck, as well as a few pieces from the Natural History Museum. The oldest object is a necklace strung together in ancient Egypt from ceramic beads, and the newest is a wooden monkey from Indonesia that was carved 5,000 years later. 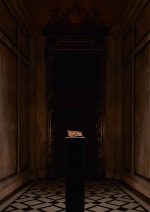 “We situate the seventeenth century emerald vessel in a confined space opposite the bright green costume from a 1978 production of Hedda Gabler in order to call attention to the molecular similarities between hexagonal crystal and Shantung silk; we place the painting of a seven-year-old falconer (Emperor Charles V) next to the portrait of a four-year-old dog owner (Emperor Ferdinand II) in order to emphasize the evolution of natural gesso; a box for the storage of Spanish powdered wigs goes next to a case for the storage of the crown of the king of Italy because both were so clearly shaped and formed by the introduction of the hinge,” wrote Anderson in the exhibition’s catalog essay.

Wondrous as the worlds that Anderson and Malouf create in their films and illustrations, Spitzhaus Mummy in a Coffin and Other Treasures highlights the art and antiquities of the Kunsthistorisches Museum in Vienna in a way that should fascinate and inspire new audiences and their imaginations. 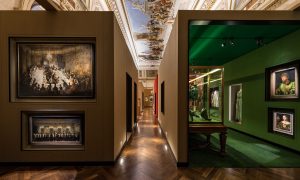 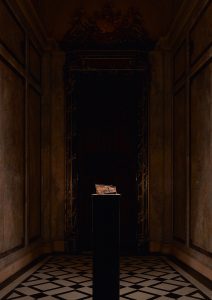 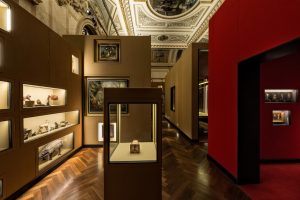