A 13-year survey of the intricate work of Kate and Laura Mulleavy—the sisters behind Rodarte—is on view at NMWA in Washington, D.C. through February 10.

Sisters Kate and Laura Mulleavy made their name as the fashion designers behind Rodarte after taking a chance. The Los Angeles-based duo started their careers after sending a capsule collection with $16,500 they saved from Kate working as a waitress and Laura selling albums from her collection of rare records. In 2005 they created ten pieces and flew the capsule collection to New York for a meeting with Women’s Wear Daily. The editors were so impressed that they placed it on the cover, which led to a meeting with Vogue editor-in-chief Anna Wintour.

It’s been 13 years and numerous accolades since that momentous moment when Rodarte made their fashion world debut, and through February 10, the National Museum of Women in the Arts (NMWA) in Washington, D.C. is presenting a survey of Rodarte’s collections. Rodarte marks the first time in the history of the National Museum of Women in the Arts that fashion label is on exhibit. The show spans the entirety of Rodarte’s 13-year existence with about 100 complete looks that showcase their couture skills, from the artful design to the skillful craftsmanship behind their beautiful collections. 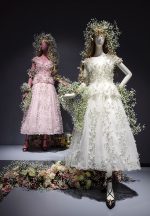 Rodarte exhibition installation view at the National Museum of Women in the Arts, D.C. Photographed by Floto Warner.

“Rodarte continually prompts a dialogue between the worlds of contemporary art and fashion,” said NMWA director Susan Fisher Sterling. “This exhibition will continue that discussion with new insights, illustrating the Mulleavy sisters’ highly creative practice and sources of inspiration.”

The looks on view at the National Museum of Women in the Arts are installed in the exact manner in which they were styled on the runway. There’s the sweeping ombré-dyed gown the Mulleavys created for their Spring/Summer 2009 collection, the celestial Van Gogh Starry Night and Griffith Observatory-inspired dress from Spring/Summer 2012, the pretty Baby’s Breath-adorned dresses that were presented at their Couture Week debut in Paris for Spring/Summer 2018, and the black feather tutu that Natalie Portman wore in Black Swan. Their process is one of the most fascinating in the fashion world, fusing together artistry and design with the opulence and skill of couture. 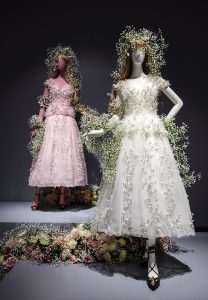 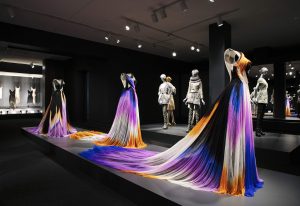