For the last few years, Prada has been carefully restoring Rong Zhai, a historical residence built in 1918 in Shanghai’s Jing’an District that fuses together European and Chinese architectural details that reopened in October 2017. During Shanghai Art Week, the Italian fashion house opened an exhibition of Chinese painter Liu Ye that’s on view until January 20, 1919.

The exhibition, titled Storytelling, features a selection of 30 paintings by the 54-year-old artist that were created from 1992 to the present. The whimsical and humor-filled paintings fuse together both Asian and European influences, bringing visitors inside the painter’s vivid imagination. The artist himself says that “every work is my self-portrait,” showing different aspects of his mind.

“I experienced his paintings as sensitive pictorial messages relayed between two worlds that are often viewed as contradictory: Western cultures versus Asian cultures. Even back then, Liu Ye’s paintings struck me as manifesting a dialectical constellation, for his work is not only interwoven in many ways with China’s manifold cultural developments; it also bears witness to a profound knowledge of the history of European culture and painting,” said Udo Kittelmann, the German curator behind the show. “His pictures are grounded equally in traditional Eastern and Western intellectual and artistic trends, conjoining the strengths of the past and the future.”

Liu’s work depicts a sort of quiet beauty and a sense of humor, infused with his experiences in Europe in the ‘90s and his subsequent return to China thereafter. Liu traveled to the Netherlands to become an artist in residence at the Rijksakademie in Amsterdam, and a few of his paintings depict the Dutch inspiration around him at the time, like the cover rendition of Rogier van der Weyden’s Waanders Uitgevers, a 2014 depiction of the famous Dutch children’s character Miffy getting married, and a 1995 still life that includes the Piet Mondrian book Rot Gelb Blau. Liu’s Chinese upbringing shows up in his portraits of Chinese women. In one work, the 1996 painting Qi Baishi Knows Mondrian, Liu combines his Chinese and Dutch influences. Set against the backdrop of the Prada Rong Zhai, Liu’s paintings bring the house to life, through snippets of his own personal narrative. 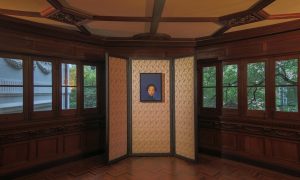 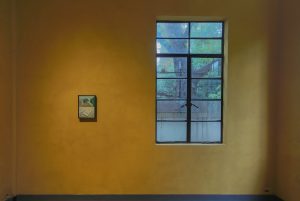 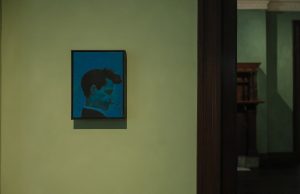 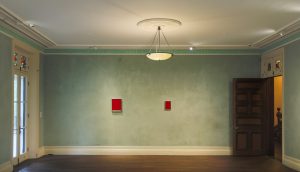