Writing succinctly about the adroit, multifaceted creative Samuel Ross is difficult. The London-based designer founded his celebrated brand A-Cold-Wall* in 2015 at the age of 25 and hasn’t stopped since. In the years following the inception of A-Cold-Wall*, Ross went from being Virgil Abloh’s assistant to facing the fashion industry spotlight. Heralded on behalf of his distinct and unapologetic style—an intricate amalgam of industrial and brutalist aesthetics which still maintain a delicate, fluid quality—Ross might be relatively new to the community, but his outstanding contributions have been lauded and there are no signs that the prolific designer is slowing down any time soon.

For his latest challenge, Samuel Ross collaborated with Nike for a second time on a groundbreaking capsule collection, which will be released globally November 29, highlighted by a hypermodern revision of the 2010 Nike sneaker, the Vomero +5. Ross’s Vomero exists through its carefully curated materials (a heat-sensitive Japanese nylon was added, plastics and rubber lack protective UV and PU coats) and a sculptural heel-piece which echoes sculptural and architectural motives apparent in Ross’s established image. Accessible, yet avant-garde, the shoe and its monotone color palette encourage a focus on form and shape. Most importantly, the sneaker entices and suggests the possibility of a narrative where the consumer is the protagonist as it is designed to show its aging process. Ross spoke to Document about visualizing aging, his architectural influences, and materiality.

David Brake—You’ve worked with Nike before on an Air Force 1. For your latest capsule, you’ve chosen to rework the 2010 Nike Vomero +5. What made you gravitate towards this particular, rather obscure silhouette from the Nike archives?

Samuel Ross—Indeed—the A-COLD-WALL* Air Force 1 echoed the ideals of exposing, redefining, and reducing what I deem to be a perfect silhouette. My approach with the Vomero is about highlighting and humanizing intricacies of the shoe. The Vomero +5 is from an era of innovation living on the exterior of a trainer—the engine, spokes, hardware—all on constant display. This provides much opportunity to isolate multiple components of the ‘engine.’ You’ll find with the reworking of the Vomero a human take on the beginning and end point of the trainers: components will age and discolor. A focus on life cycle has been introduced through the removal of several PU and UV coatings frequently used to avoid discoloring and aging. I want the shoe to live, [and] that’s been achieved by removing the film between the product and the effects of our environment.

David—You mentioned that this collaboration is designed in part to show how objects age. Why is the concept of aging important to you, and how is this capsule capable of portraying that?

“The visualizing of ageing has been achieved—it’s simply more human.”

Samuel—Indeed, the visualizing of aging has been achieved—it’s simply more human. The idea of a carbon, formless future seems quite dire—paralleling the realities of fast fashion, product turn over and environmental issues: all of which need combating. Producing a product that has been carved with the intent of regeneration—well, exposure—champions the idea [of] a future that does not alienate itself from natural processes; that, I believe should be celebrated—there’s almost a philosophy to the product intent.

David—I’ve only gotten a glimpse into the research phase of this project through social media and photos online. What does your research for projects such as these usually consist of?

Samuel—To start, looking at everything outside of the footwear and clothing sphere. The process is different for each project/endeavor; I start with sketches which take form after a flurry of trigger words relating to a project [that] have been jotted down—these words can span from ‘industrial,’ to ‘sonic,’ ‘monotone,’ etc. Sound, or the idea of sound’s relationship to space and material, plays a huge part in my research and development phases. Prototyping plays a huge part; 18 months were spent working on the heel sculptures, tonal story, color palette, and reworking Japanese nylons.

David—Speaking a bit more about materials; your work—everything from your previous collaborations, to your pop-up installations—seems to partially hinge on tactfully and intentionally chosen materials. Looking at your upcoming Nike Vomero, I again notice carefully chosen and unique materials that seem to balance function and form through a revision of high-tech aesthetics. In your design process, how important are the materials you choose and what role does technology play? 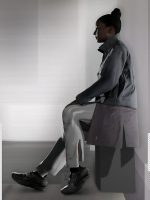 Samuel—Materiality throughout my work often houses a dual purpose. Firstly, properties of the material must fit into the wider narrative, that of industrious, brutalist workings; this often frames our base materials of reclaimed wood, iron, and steel. Secondly, semantic values of a material such as color, scale, weight, and finish frame the materials, and reposition the dialogue of how material can echo a much more emotional discourse. Thirdly, the ability to develop garments and concepts alongside technology is now presenting itself—it’s come with growth, access to further resource[s]; really pushing myself and the team to approach new techniques and executions— it’s an exciting prospect.

David—I know that in addition to the Nike Vomero shoe, the capsule will include a few other pieces including outerwear and trousers. How do these pieces fit into the capsule at large? Do they continue to play with the ideas that you’ve introduced through the shoe?

Samuel—The clothing focuses on exposure—more so the idea of interlocking components—that speak through negative and positive space. And the ability to transform—there is a relationship between the human approach that pioneers the Vomero. Nylon is a key focus throughout the clothing: a questioning of materiality vs fabrication has always been of interest to me—Japanese nylons the heat-sensitive properties blur that line further.

David—Looking back at your SS19 collection, HUMAN. FORM. STRUCTURE., I notice what seems to be a focus on sculpture. More specifically, the collection seems in part to be a study on how sculpture moves, something that is evident in your sculptural collaborative project with Jobe Burns for Concrete Objects. I also know that you have an interest in architecture, and that the capsule’s initial release will be in partnership with the Architectural Association School of Architecture. Based on your work in these two fields, how do these two practices, sculpture and architecture, which inherently are quite static, translate to your work with A-Cold-Wall*?

Samuel—Indeed, sculpturing isolates movement. It captures emotion and a scenario.

I find it fascinating—it is a field that I’ve had a relationship with for a while. Through toiling, my time developing commercial products, and as a contemporary illustration student—the tools have changed, although intent and relationship have bled into a more direct, tangible form. A-COLD-WALL* hones the premise of architecture above sculpture—both are present, though performative architecture is encouraged at every turn from our retail spaces, whilst [also] encouraging the consumer, the protagonist, to physically involve themselves with material—not simply product. Tangibility, in both fields, is incredibly important to relaying many of A-COLD-WALL*’s talking points—collaborating with the Architectural Association School of Architecture has been barrier removing. We’ve honed the idea of free thought. And the results are refined, considered, environmentally friendly—quite meditative actually. 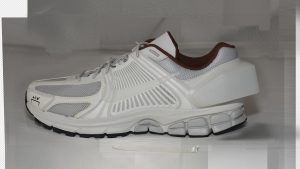 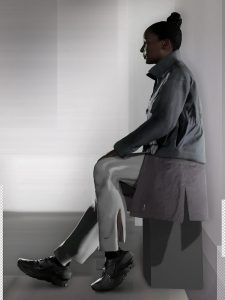