In 1886 the great Scottish-American industrialist Andrew Carnegie announced his grand plans for what would arguably be the first contemporary art museum in America.  “I am thinking of incorporating with the plan for a library that of an art gallery in which shall be preserved a record of the progress and development of pictorial art in America.” The first gallery of the Carnegie Museum of Art opened in Pittsburgh in 1895, and in 1907, the institution expanded with a neoclassical-style building dedicated to, according to words etched on its exterior, “literature, science, and art.” Some of the names of the greatest contributors to those areas were immortalized on the outside of the museum, with their names carved on it. They included Franklin, Rembrandt, Chopin, and Darwin—all men who were Caucasian.

When Bahamian-born, New York-based artist Tavares Strachan did a site visit for the 57th Carnegie International—on view there through March 25, 2019—the names caught his eye. “I was just curious about the names they already had on the building, and so I just wanted to think about editing, or adding to that list of names of people who might be invisible, or who might not ever end up on a building,” said the artist. And so, Strachan decided to create an extension of his five-year project called Encyclopedia of Invisibility for the exhibition by adding names of those he thought should line the exterior of the Carnegie Museum of Art in a rainbow of scripted neon lights, either alongside or on top of the existing names of the building. The artist also installed the phrase “All of the people that have been made invisible through the mechanism of history.” “Monk” (for Thelonious Monk) now covers “Darwin,” and “Baldwin” hangs over “Franklin.” Other names Strachan added to the Carnegie Museum of Art’s façade include Hedy Lamarr—for the Austrian scientist and actress, Tenzing Norgay—the Tibetan sherpa who was one of the first two individuals to reach the summit of Mount Everest in 1953, and the late rapper Tupac Shakur. “He’s someone a lot of people know,” said Strachan, referring to Shakur, “but he would never be on a building like this.”

The unveiling of Tavares Strachan’s The Encyclopedia of Invisibility, 2018, on the façade of the Carnegie Museum of Art as part of the 57th Carnegie International. Photographed by Slant House Productions.

For the exhibition’s opening, Strachan conducted a performance that involved illuminating the additional names that he placed on the Carnegie Museum of Art, and 11 eight-year-olds that he recruited with the help of the Kelly Strayhorn Theater, who were dressed in white uniforms he created with his mother consisting of a bomber jacket adorned with patches (each one had a name of one of the invisible), collared shirt, tie, and slacks. The kids acted as museum docents, giving participants a tour of the project. Each child stood on a soapbox and recited information about the character he or she embodied.

The artist maintains that the project is not just about highlighting the names of those forgotten by history. “It’s more about engaging in a conversation about the future,” said Strachan. “Engaging in a conversation about how we can think about history as not fixed, how we can edit it potentially, how there’s still possibility—so even in those gaps. It’s not about covering themthe about thinking of working with them, working within that structure to try and create new structures.” 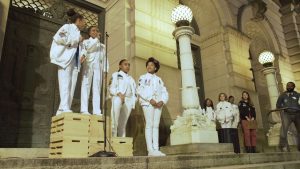