Artist Suellen Rocca, who has work currently being shown in three exhibitions this fall at Matthew Marks, the Art Institute of Chicago, and the Elmhurst Art Museum—where she serves as curator of the collection—speaks about her art-fueled adolescence.

Suellen Rocca is one of the six members of the Hairy Who, a prominent group of six Chicago artists who also include Jim Falconer, Art Green, Gladys Nilsson, Jim Nutt, and Karl Wirsum. From 1966 to 1969 the Hairy Who, who later fell under the umbrella of the Chicago Imagist movement and were all recent graduates at the School of the Art Institute of Chicago, exhibited their cheeky paintings and drawings at six shows—three in Chicago and one each in San Francisco, Washington, D.C., and New York. The period was a time when the country was going through a tumultuous change with the Vietnam War, political assassinations, space exploration, student protests, myriad counterculture movements, and the fight for equal rights for females and minorities, and the issues often show up in different forms.

Rocca’s work, which was influenced by everything from fashion, her dreams, and the world around her, is currently being shown in three exhibitions: A selection of her drawings from between 1981 to 2017 at Matthew Marks in New York through October 27; her work from the ‘60s is on view at the Art Institute of Chicago in a Hairy Who group exhibition until January 6, 2019; and she’s also curated a show of the Chicago Imagists that is showing at the Elmhurst Art Museum, through January 13. Document’s Ann Binlot spoke to the 75-year-old artist about the origin of Hairy Who, her process, and the advice she has for young artists.

Ann Binlot—You went to School of the Art Institute of Chicago right when you were 16. What was it like attending art school back then as a woman?

Suellen Rocca—I never experienced discrimination in art school or really as an artist in my career because of being a woman. I know that certainly is not true for the majority of women, but I certainly, if you’re asking about school, never experienced discrimination or seemed to have teachers show any less interest in my work. Certain teachers especially were very supportive and were extremely important in my development as an artist.

Ann—What were you choosing to depict when you were in art school? Can you describe what your practice was like then?

Suellen—Well, you know it certainly changed from the time I started school until the time when I was in my fourth year. I actually started drawing the figure when I was eight years old—from a live model at a class that I attended. When I was 16, at the beginning of my first year at the School of the Art Institute of Chicago, I would say that my work was figurative. I was working in oils. I was working large. And somewhat later I was interested in Chagall and Miró. And with the school being part of a museum, we had all this wonderful access to look at their collections. In my third and fourth year, I started developing a more personal style. We had a fellowship competition and I recall that I did a number of very large paintings that were inspired by imagery and from popular culture and used a repetitive image. I did a painting called “My Santa Painting,” which had alternating images of a Santa and then a winter snow scene. At that point in my third or fourth year I began evolving my own voice. 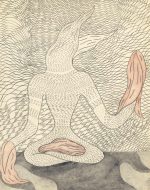 Ann—Tell me how you became part of the “Hairy Who.”

Suellen—The [original] five of us in the Hairy Who knew each other in school. Following graduation we showed in three shows, Animal, Vegetable, and Mineral at the Hyde Park Arts Center, which were large group shows that meant we could only show one piece. So Jim Nutt and Jim Falconer approached Don Baum, the director of the Center—and a very important figure in the history of Chicago art—and suggested a smaller group show which was comprised of  Jim Nutt, Jim Falconer, Art Green, Gladys Nilsson, and myself. Don thought that was a good idea, suggesting we also include Karl Wirsum. So after that we got together and we started planning the shows.

Ann—How did you decide on a name?

Suellen—We didn’t want to use one that was like the other names that were popular at the time, such as “Sixteen New Artists.” So we just were kicking ideas around and we got off on a tangent talking about an art critic named Harry Bouras who had a show reviewing exhibitions on the public radio station. In walks Karl Wirsum from the other room and he goes, ‘Harry who? Who’s this Harry?’ We all started laughing because we knew right then that was the name for the show. And of course we changed the name Harry to H-A-I-R-Y. We then collaborated on comic books for each show instead of catalogues, on the poster, and on the installations. We went on after that to collaborate for shows at the Art Center in ‘66, ‘67, and ‘68, which led to us being invited to show at the San Francisco Art Institute and at the Corcoran Museum in DC and at the School of Visual Arts in New York.

Ann—What influenced you during that period?

Suellen—The short answer is we were interested in reflecting popular culture. I looked at a lot of catalogues. My father-in-law was a jeweler so I looked at his jewelry catalogs with these rows of diamond rings. I looked at catalogues from Sears which had these bra and girdle ads that were a sort of sepia tone. And I also looked at a lot of historical work including Egyptian hieroglyphics, which is of course a form of picture writing.

Suellen—No. I never wanted to move to New York. We were showing as the Hairy Who in that period, and that was extremely satisfying to have that interaction with other artists whose work I really liked and to be working on these shows. That was my focus. I was not focused on commercial galleries.

Ann—You showed in New York in 2016 at Matthew Marks Gallery. How did you feel to have a solo show in New York?

Suellen—I loved it. I was totally excited. You have to understand that first, Dan Nadel did this show called What Nerve! that was at RISD. With a version of that show being exhibited at Matthew Marks Gallery in 2015. Matthew Marks then invited me in 2016 to have a show. It was fantastic, it was wonderful, and it was very exciting. Response to the show was really positive. Young artists were really interested in the work and came to the opening, which was great.

Ann—What about your current show at Matthew Marks? The subject matter now seems to be very surrealist. One image that struck me in particular was the one of the woman holding a fish at her breasts. Can you tell me a little more about that? 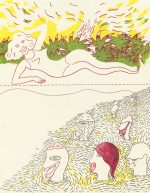 Ann—And then I see that there are fish in your work. What does the fish mean to you?

Suellen—Well different things in different drawings. It depends really on the drawing what the significance is. There are some later drawings where the figure is, in a sense, trying to contain the fish, to hold onto the fish, but they’re flowing out and away—a sign of loss. I used the image of the fish for quite a while.

Ann—What was it like for you to go from attending to the Art Institute as a student to seeing all the times your work have been presented on the walls?

Suellen—It’s interesting because when we were at The School, the Art Insitute used to have these shows called the Chicago and Vicinity Exhibitions and they were juried shows with outside jurors, often from New York and as youn artists, we were selected to be in those shows which was very exciting at the time. So how does it feel? Amazing! I started going to the Art Institute at 8-years-old. When I was 8 years old, after the class that I attended at the museum, I would wait outside for my mother to pick me up and I would stand out there leaning against one of the statues of the lions, and I dreamed that someday I’d have paintings at the Art Institute, so you could actually say this is a dream come true.

Ann—Do you have any advice for the younger generation of artists?

Suellen—To look at work, to go to exhibits, to go to museums—all kinds of work from ancient to modern to—you know across different cultures and find what you respond to and don’t be satisfied with thinking you’ve seen the work if you look at it on your phone or on your computer. That works as a wonderful introduction though, much like when I was a student and we would look at books and then go to the museum and then you go, it’s so much larger, the color is so different and it’s that wonderful ‘a-ha!’ moment. 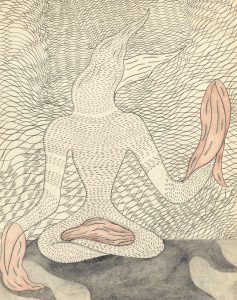 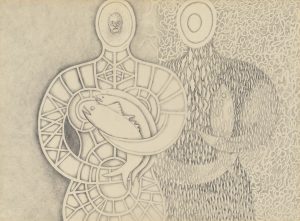 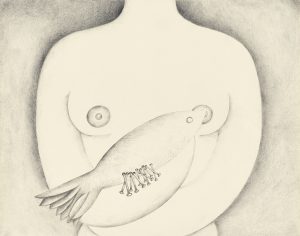 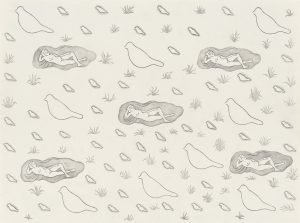 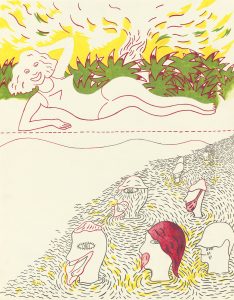 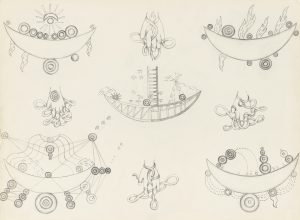