Document looks at the trends of London Fashion Week, from lace-trimmed garments at Burberry, to florals at Pringle of Scotland and Erdem.

London Fashion Week wrapped up on Monday, after five days of fashion frenzy in the British capital. Victoria Beckham returned home to celebrate the 10th anniversary of her eponymous fashion line, while Riccardo Tisci came full circle—who graduated from the prestigious Central Saint Martins fashion design program in 1999—with his debut collection for Burberry. Here are five trends from London Fashion Week, from the gender-neutral designs that ruled the runway to the floral prints that signaled the coming spring.

Elements of the 19th-century Victorian-era dressing were prevalent on the runways of London Fashion Week. Designers referenced the bell and dolman sleeves that were so popular during that period. Roksanda did so in a wrinkled, sherbet-colored maxi dress, while Erdem had a number of dresses that followed the ubiquitous Victorian silhouette. Emilia Wickstead showed a minimal pink dress that was thoroughly contemporary, even while producing a thoroughly referential silhouette.

Molly Goddard’s entire collection was filled with ruffles, from an olive mini dress, to a simple sleeveless navy maxi dress with a ruffled skirt, to a colorful, multi-print asymmetrical shoulder top. Richard Quinn, meanwhile, seemed to travel back to the ‘80s with a trio of vibrant, ruffled cocktail dresses. A pink blouse with sculptural ruffles at the shoulders was a highlight of Delpozo, as Erdem used ruffles in a sheer black maxi dress. 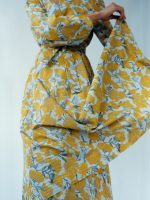 English Garden
A popular spring motif, floral prints were everywhere on the London Fashion Week runways. Pringle of Scotland used florals in a number of looks in its collection, from a maxi dress covered with stripes and a yellow floral print, as well as on several pieces of knitwear. Simone Rocha used her signature floral patterns on a number of dresses, while Mary Katrantzou but a colorful sprinkle of flowers on a white tulle dress. One of Richard Quinn’s looks consisted of a white mini dress covered in sequined red roses, while Alice Archer used them all over her pastel-hued collection.

Lace
Delicate and dainty, yet provocative and alluring, lace proved to be a popular medium for Spring 2019. Christopher Kane used it throughout his collection, using it to cover a powerful skirt set and a minidress. Simone Rocha covered her models’ heads with a black lace veil, while turning to the material for trim on a sheer blouse and a dress. At Burberry, Riccardo Tisci used it to adorn a slip dress accented with poofy gingham sleeves. Meanwhile, Victoria Beckham took a typically masculine silhouette—an oversized collared shirt—and formed it with a patchwork of various types of lace. 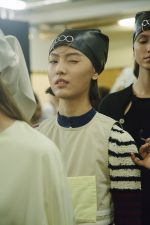 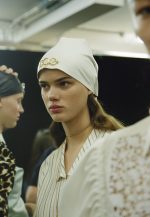 Gender Neutrality
While women have been daring to cross gender lines in clothing—Yves Saint Laurent revolutionized the idea with the Le Smoking suit—and in recent years the idea has proliferated on the runway. Pringle of Scotland had a plaid, hooded jacket and matching trousers, while J.W. Anderson presented coordinated, color-blocked wide-legged trousers with matching collared shirts. At Toga, an argyle cardigan was paired with emerald green slacks and a khaki trench. Ports 1961 incorporated the trend in its collection through denim cargo pants and a white-collared shirt covered with various photographs. 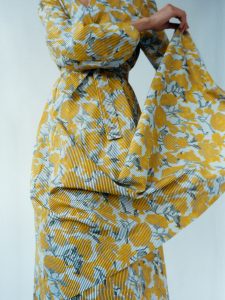 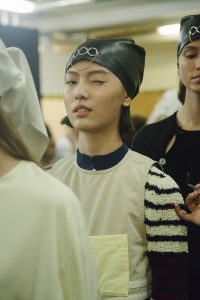 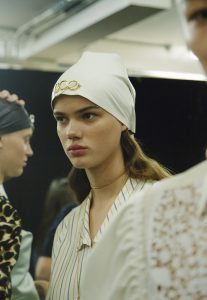