The French designer and artist collaborated with Hermès to create window displays, scarves, and tabletop items.

Hermès has a long history of artist and designer collaborations, such as when, last spring, Nigel Peake drew freehand botanical patterns for tabletop accessories, or in 2012 when Hiroshi Sugimoto created a gradient design for scarves, with Julio Le Parc then contributing his geometric abstraction in 2015 to the Hermès Éditeur series. Now the latest to join with Hermès, French designer and artist Pierre Charpin unveiled a series of windows at the Hermès locations on Madison Avenue, along with a collection of scarves that feature his designs, as well as a line of tabletop accessories.

French designer Martin Szekely connected Charpin to the house in the early ‘90s, when he introduced him to Rena Dumas, the late architect and wife of former Hermès group chairman Jean-Louis Dumas. Several years later, Charpin, now reunited with the house, got to dig deep into the Hermès archives to find material for his collaboration. “I remember the quantity of objects and the impression that Hermès have an expansive history, Hermès is very conscious of its own story which is very important for a brand like Hermès, this relationship with its own history,” recalled Charpin.

For the scarf designs, Charpin took an abstract drawing from his oeuvre. “We started to interpret this handmade drawing with a computer, so we started to change the proportion and the color, and so it became really abstract. This shape is ribbon-like, but you can also imagine it spatially as well,” explained Charpin, who discovered the ideal horse for the piece in an Hermès book that featured several depictions of the animal that marks its equestrian roots. It was the look in the horse’s eye that drew Charpin to it. He placed the horse illustration in the ribbon, forming it in space. “The abstract aspect of the first drawing changed completely with the horses, because you can read the ribbon like a space, not like an abstract drawing,” said Charpin, who named the design La Serpentine de Pierre Charpin. 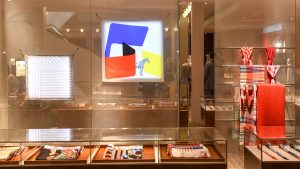