Eckhaus Latta tests the boundaries between fashion, art and commerce at The Whitney

Eckhaus Latta, the cult fashion label by Mike Eckhaus and Zoe Latta, is the subject of The Whitney's first fashion-focused exhibition since 1997.

Eckhaus Latta: Possessed, the Whitney Museum of American Art’s first fashion-focused exhibition since 1997, is all about possessions. Possessing clothes, in particular. There, visitors will discover a store where you can walk in for free, touch and try on all of the items on offer, and bask in an expertly curated (by the Whitney’s Christopher Y. Lew, organized with head of product development Lauri London Freedman) collection of artworks, all created by brand-affiliated artists. It’s an effortless shopping experience; the salespeople are friendly and helpful, the patchwork curtain for the dressing room—made by early fashion-cum-art adopter Susan Cianciolo—courteously wraps fully from wall to wall, and there are several easily accessible phone chargers. Sold as an exhibition, it should instead be used as a blueprint for clothing stores everywhere.

Lew has spent over two years conceptualizing the show with Mike Eckhaus and Zoe Latta, the two partners behind the edgy label, who had previously exhibited their work in other institutions, such as The Hammer Museum in Los Angeles. But what suited them to a solo show of this magnitude? “There is a new generation of artists and cultural producers who are not beholden to divisions between disciplines,” Lew wrote in an email. “Eckhaus Latta’s approach to fashion is similar to the way artists work. Mike and Zoe are inspired by the materials they use, whether it be repurposed T-shirts, plastic beads or an incredible textile pattern. They have a truly adventurous spirit.”

Cianciolo agrees. As one of the first designers to stage her fashion shows in galleries, she sees no boundaries between disciplines. As someone whose work is a progenitor of the sort that Eckhaus Latta creates, she was thrilled to take part in the exhibition. “When I went to their first show at The Standard, I brought some kids with me and it was insane,” she said. “But I really looked at the work and just said ‘yes.’ I never thought it would happen. This is some really good work, and it moved me. And I rarely feel that. I felt the language, I felt what they were talking about, and that was it. I drank the Kool-Aid.”

Possessed goes like this: after walking through The Whitney’s lobby, one enters a small hallway with lightbox, advertisement-like photographs, shot by Charlotte Wales, of Eckhaus Latta model favorites like May Hong and Michael Bailey Gates. Wales, in a dose of aptly-timed 2000s-era nostalgia, also shot Gemma Ward, queen of the early-aughts doll-face models (when asked why the supermodel was selected, Latta told me she was on their list after discussing variations on the word “iconic”). There is then a larger room filled with the merchandise, specifically designed for The Whitney, and various art objects, including works by the likes of Martine Syms and Jeffrey Joyal. And finally, there’s a blackbox space, made in collaboration with filmmaker Alexa Karolinski, filled with multiple screens showing CCTV video from various Eckhaus Latta stockists; after shopping, you watch other people shop. One screen plays live video from Possessed.

This blatant combination of art, commerce, and fashion seems to be confusing some people (namely the New York Times; when I asked Cianciolo what she thought of divisions between the three, she was perplexed that I would even ask). But there are simple practicalities at play. Much of Eckhaus’s and Latta’s clothing is downy, cloud-like; you want to touch it. “Even if someone does not want to purchase anything, they are encouraged to try things on, to feel what it is like to have an Eckhaus Latta design on one’s body,” Lew wrote. “The show is not intended to be looked at but to be felt, touched, and worn.”

There is much to touch in the shopping section. There are knit tanks, ribbed baby tees, white jeans, and matching jackets, a tie-dyed suit. Sweatshirts are printed with poems that read “The way the sun hits America/It was the latest thing to be nowhere/This was the riverbed/where they shot Grease/I made you a matte grey smoothie/And you never called.” An accurate distillation of Los Angeles. I fingered socks with the words “Who’s paying for this” moving in block letters down the sides. They were missing their price tags.

Certain garments, like a sweater handmade from plastic bags ($7,200) and trousers and skirts with long beaded fringe, hang from the walls like art objects. And the ability to interact with most of the artworks is on par with the ability to interact with the clothes; one can trod on a rug by Sophie Stone, toss garbage in a trash can by Amy Yao. Sunglasses are easily accessed via a ceramic shelf by Matthew Lutz-Kinoy, and Cianciolo’s curtain, which she labored over for several months, will be run back and forth across its rod several times a day, thousands of selfies taken in her “Dress mirror.” Syms’s sculpture, called “Taurus,” consists of plastic crates of the sort used to carry around wholesale t-shirts, held together with simple zip ties; the jeans placed on top bear text reading “Most Places Come Undone.”

“Just because anybody at any time could walk into any store doesn’t mean that they’re going to feel comfortable doing so,” said Freedman. “But, we as a not-for-profit art institution, make it our mission to welcome people of all backgrounds with all kinds of resources. And the fact that somebody would be able to walk in and try on a piece of [Eckhaus Latta] clothing and experience that in the context of a museum, where you’re inspired to think about things more deeply and to spend the time with them? I think that’s pretty awe inspiring.”

The Whitney does not charge entrance fees for people under 18, and access to the Eckhaus Latta exhibition is free for all. But there is also, of course, the late capitalism factor. Fashion exhibitions, like those at the Metropolitan Museum of Art’s Costume Institute, tend to serve as blockbusters for museums, an ideal money-making enterprise. And so Eckhaus and Latta’s store makes the obvious plain: people are here to buy things, and the institution wants you to buy things too. “Everything in this building has been for sale or is for sale,” said Eckhaus. “These are all commodities in one way or another.”

“I think this idea that the gallery, the museum, is a place for thoughtful contemplation about this experience while not removing it from the experience that it’s intended to reflect, is pretty genius,” said Freedman. “And that’s all Mike and Zoe.” Exit through the gift shop, and all that.

Surveillance capitalism is the practice of monetizing data attained through surveillance; in Possessed, the concept becomes a playground. The dark screening room is filled with footage from cameras following customers around various stores, the footage unlabeled; videos come from a mix of Eckhaus Latta stockists, their LA boutique, and the exhibition itself. Latta told me some of the videos are staged, though it’s impossible to tell which ones. In some videos the customers’ faces are blurred, but in most you can see them clear as day.

“While it may be sinister, there is also a back-of-house banality to CCTV footage that serves as a foil to the glamour of public-facing ad campaigns,” wrote Lew. “And even though there is no social media present, the installation points to how individuals enact a kind of self-surveillance by sharing our daily actions.”

While inside the installation, I took photos of three friends shown on video. They all asked me to. We posted all of the pictures on Instagram. It’s an obvious, standard 2018 move, to laugh at the omnipresence of tracking.

“I think that’s also the language of the inevitability of voyeurism in fashion and how that is so much a part of fashion, is that you are being looked at or looking at someone else always, in sort of assessment,” said Eckhaus when I asked him about the Instagram factor. “But also, like this isn’t trying to be so necessarily outward in that way. It’s just kind of maybe thinking more of like, something that is always present.” At this point, I have so many selfies from the little cameras at CVS. Everybody does.

A picture from the screening room is also something of a status symbol, especially if taken before the official exhibition opening. A substantial branch of the fashion industry is now ruled by Hypebeast culture, where items are valued for rarity over all, for the experience of waiting in line to pay for specially-branded sneakers and bucket hats and nylon jackets in order to get them before everybody else (and subsequently resell them before everybody else). My friend Dalya pointed out that Eckhaus and Latta seem to be winking at the Off-Whiteness of it all, with Whitney items brandishing tags marked “Special Museum Production.” The exhibition’s opening party was held on Thursday night; Supreme, to this day, holds their drops on Thursdays. A sculpture by Jessi Reaves, called “I’m a fan,” features a plastic fan covered in Vogue Runway images of Eckhaus and Latta, poking fun at their somewhat newfound celebrity.

“We don’t control our product release and our audience in those tones,” said Latta. “And even if there is a demand for our clothes and they sell out at certain points, it’s not something we like, toot around town. At the same time, it’s really fun to play with that culture. If nothing sold here and they still had those tags it would be really funny. So, we’re happy to see that things are selling, but it’s definitely taken with tons of humor.”

I bought the “Dog Person” tee, size Large, for $60 (museum members could purchase it for $54). The t-shirt is soft and Brontë grey, featuring a woman—ass out, in an ur-Insta thot pose—with the head of a dog. I wore it to the office today, and my coworker asked where I’d bought it. “It’s Eckhaus Latta,” I bragged. “From the Whitney.” A very special museum production. 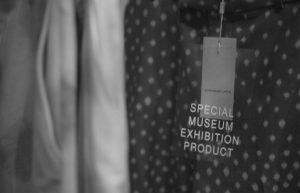 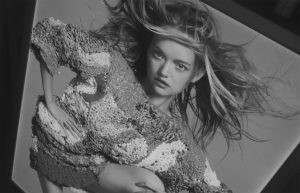 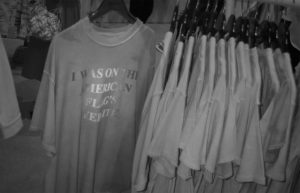 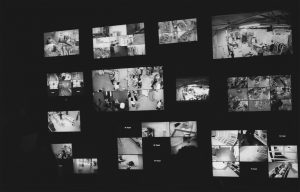 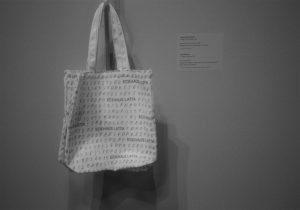